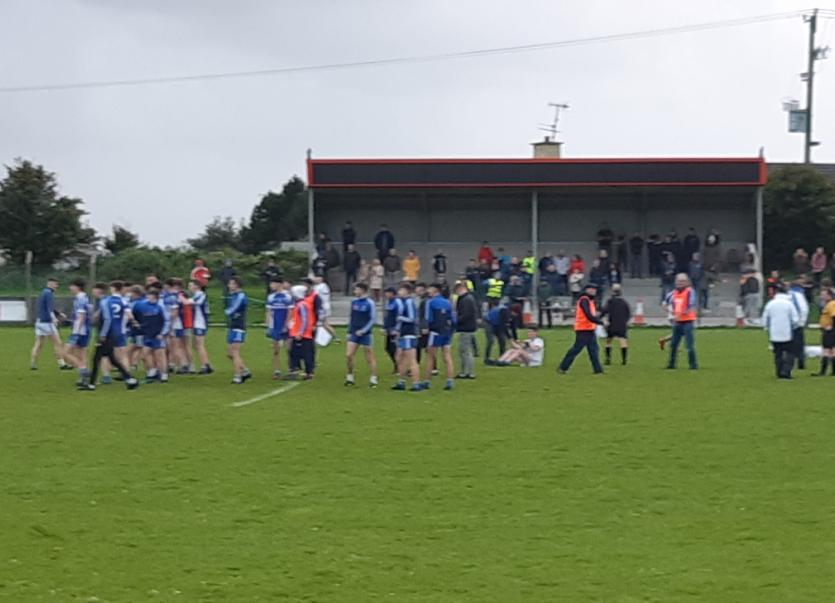 Fabulous Four Masters turned on a memorable display of panache and power that eventually blew away a spirited challenge from Naomh Conaill in a richly entertaining final in the well-appointed Gaelic Park in Bundoran.

This was a game studded with some great scores from both sides, but Masters had better forwards, were very well organised defensively and did not panic when danger threatened.

Their powerful wing-back Carl McGarry repeatedly drove his side forward while midfielders Richard O’Rourke, who was on this year’s Donegal U-20 squad, and Ultan O’Grady were major figures.

But it was up front that Masters really excelled with powerful centre-forward Alec McCalmont hitting 1-3, full forward and captain Shay Travers notching 0-2 and causing havoc.

However man of the match by a whisker goes to corner forward Dermot Slevin who hit 1-5 and his last point was the score of the match as he went through three tackles a la Martin McHugh before hitting a thumping score.

Slevin also had the last score of the game as he converted a penalty in the 39th minute to seal matters.

The amount of extra time was a bit of a mystery and was not helped by what appeared to be one excessively long consultation between referee Declan Callaghan and his linesman Shane Toolan.

For Naomh Conaill, dual star Daniel Gildea was a shining light, especially in the first half when he struck some wonderful points from long range.

Neil Fancis Boyle, Robbie McDonald and Joe “Shankey” Smith all had their moments.

But Gildea lacked consistent support up front and they tended to give away frees.

The winners led by 0-8 to 0-6 after a well contested opening half, but despite having a slight breeze Naomh Conaill failed to score in the second half until the 52nd minute.

By then this match was well sealed with a clinically fashioned goal for the winners that was finished by the impressive McCalmont in the 38th minute as Masters led by 1-10 to 0-6.

The game began at a frenetic pace with both sides defending and attacking in waves.

Slevin and McDonald exchanged early points while Travers edged Masters in front with a shot that looked wide but was awarded.

Masters gradually got on top and moved into a 0-7 to 0-2 lead by the 20th minute through well worked points from Mark Jordan, O’Grady, Slevin (free) and two great points from McCalmont.

To their credit Naomh Conaill rallied towards the break with a brilliant Gildea point.

O’Rourke made it 0-8 to 0-3 but Naomh Conaill hit the next three points in-a-row from Conor Roarty, Gildea and McDonald to cut the Masters lead to two points as they led by 0-8 to 0-6 at the break.

Naomh Conaill had the slight breeze in the resumption, but it was the ice cool Masters boys who got those vital scores from Shay Travers and Slevin to open up a slight gap.

It got even wider when McCalmont goaled and Naomh Conaill were just not able to get into the scoring zone until the 52nd minute.

And they were finding it very difficult to cope with the sheer power of McCalmont, Travers and Slevin.

Masters eased into a 1-13 to 0-7 lead thanks to further points from McCalmont and two mighty efforts from Slevin.

They did get a fine late goal from Odhran McCalliog and Robbie McDonald also goaled in the 34th minute.

To the great annoyance of the Naomh Conaill contingent referee Callaghan called play back for a foul on the player.

Their frustration was understandable, but referee Callaghan had blown his whistle before the ball was kicked but it was a close-run thing.

The remaining minutes were scrappy with Slevin being fouled for a penalty with a long hold up before it was taken.

And that was the deal sealed for Masters who look a side of real quality.

But Naomh Conall richly contributed to a most entertaining match.