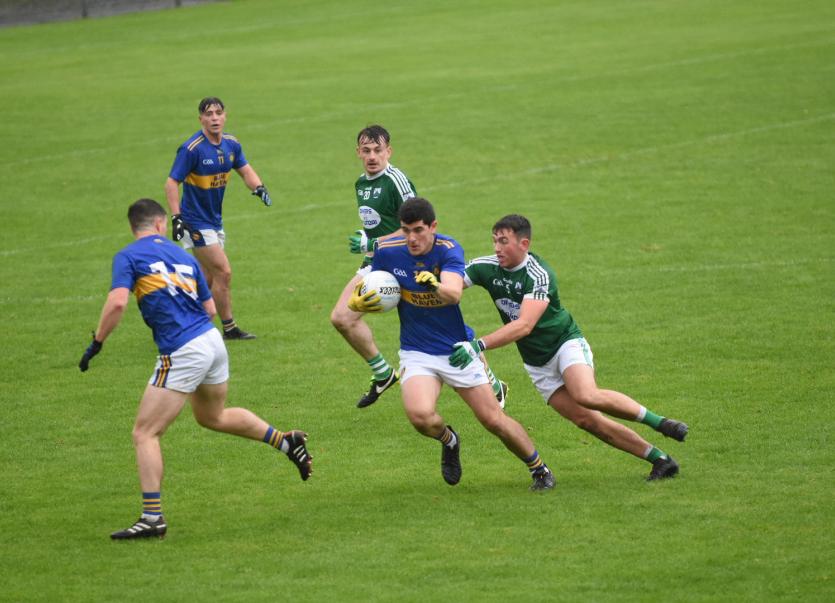 Kilcar were worthy winners of the first Michael Murphy Sports senior championship semi-final with a good second half performance.

Gaoth Dobhair had Michael Carroll and Odhrán Mac Niallais in from the start but they were without Kevin Cassidy and Ethan Harkin. Mac Niallais didn't look fully fit and was replaced in second half while Carroll had a good opening quarter but faded after that.
As expected Kilcar were minus full-back Brian O'Donnell but they made light of it in extremely difficult conditions of wind and rain.
It was even for most of the opening half but Kilcar pulled away in the second period and Gaoth Dobhair would have needed further goals to the one they got in the opening period from Eamonn Collum.
Kilcar had the better individual players with Ryan McHugh, Andrew McClean and Stephen McBrearty outstanding, while Odhrán McFadden Ferry and Dáire Ó Baoill put in big shifts for Gaoth Dobhair.
Andrew McClean had Kilcar on the board inside 40 seconds. It was the south-west side who were much sharper in the opening ten minutes.
Ryan McHugh lofted a good point and Eoin McHugh quickly added a third on seven minutes.
But Gaoth Dobhair gradually got into the game and put pressure on the Kilcar defence. Neil McGee and Naoise Ó Baoill set up Michael Carroll to get their opening score and Seaghan Ferry added another with his left.
It got better on 15 minutes when Gaoth Dobhair struck with a quick break for Eamonn Collum to find the net with his left. The move started with a great intercept by centre half-back Donal Mac Giolla Bhride and Eamon McGee gave the killer pass.
Kilcar responded well with Ryan McHugh pointing and they had a half goal chance on 22 minutes with a good ball over the top. The opening, however, was closed and Darragh O'Donnell elected to take a point and level matters.
After some good patient play Dáire Ó Baoill edged Gaoth Dobhair back in front but Ciaran McGinley won a free on 28 minutes and Patrick McBrearty left it all square at the break. Kilcar 0-6, Gaoth Dobhair 1-3.
Ryan McHugh won a free 30 seconds after the resumption and it was moved on for dissent for Patrick McBrearty to edge Kilcar in front. And they had a sniff of a goal chance minutes later when Andrew McClean got in along the endline.
Matthew McClean doubled the lead on 35 minutes and Patrick McBrearty, for the first time in the game, turned Neil McGee and lobbed a great point off an upright.
But Dáire Ó Baoill hit back with an equally good score.
Kilcar were almost in for a goal on 45 minutes as Conor Doherty was found with a great crossfield ball. He was fouled by Eamon McGee, who picked up a yellow card. Patrick McBrearty pointed the free.
But again Gaoth Dobhair responded with Kevin Cassidy, just in, winning a free and Ethan Harkin converted to leave it 0-10 to 1-5 at the second half water break.
The next score in the diabolical conditions was important and Stephen McBrearty won a soft free as he went for a shot and Patrick McBrearty obliged to open the gap to three.
And it was a four point game when Stephen McBrearty broke strongly from defence and Ryan McHugh could have went for goal, but tapped over.
Patrick McBrearty added another on 57 minutes which put daylight between the sides for the first time.
Ethan Harkin pointed a free but it was Andrew McClean hit the final point for a convincing win for Kilcar.