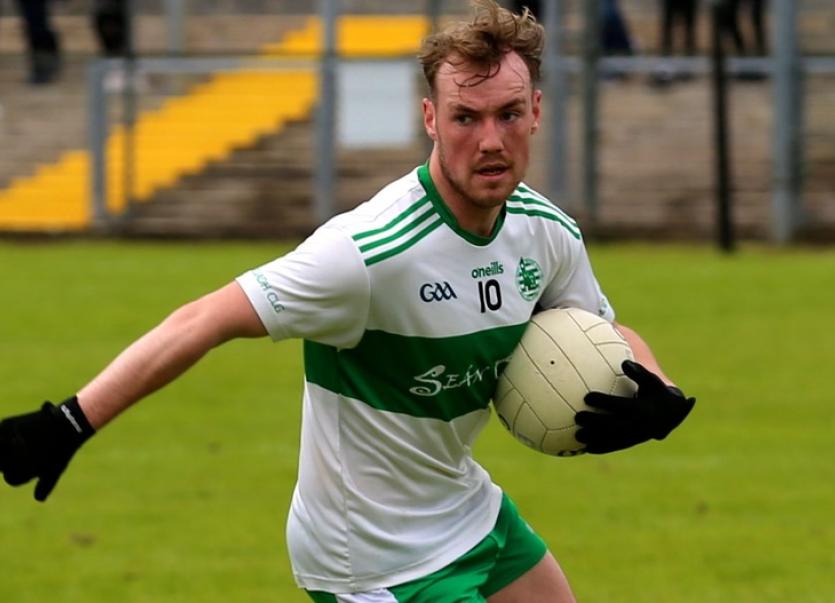 Ryan Gillespie . . . got the goal which killed off the game for Naomh Columba

Mighty McGrath got man of the match as well in a tie where the brave Ballyshannon boys only took the lead for the first time with McGrath’s great strike.
On balance, they deserved this victory after trailing for 64 minutes against a plucky young Glen side who will be hugely disappointed after leading for so long.
This was a great contest, studded with some superb scores, towering catches and agonising near misses and a draw would not have been out of place either.
But Glen will rue a few rushed passes and one in particular where they opened the Aodh Ruadh defence at the end of normal time, but the final pass did not meet its intended target, Paul O’Hare
It took a last minute point from Diarmuid McInerney to bring this match to extra-time.
Aodh Ruadh then lost Cian Dolan while Ryan Gillespie and Philip Doherty were lined for Glen, as both teams were out on their feet in a heart-stopping finish.
Glen had the breeze in the opening half and were well worth their 0-7 to 0-1 half-time lead and also hit five wides.
Aodh Ruadh hit back with an Oisin Rooney goal midway through the second half to leave just three points between the sides at 0-10 to 1-4.
But they were hit with a hammer blow as Ryan Gillespie goaled for Glen to leave them leading by 1-11 to 1-6.
But enter super sub Philip Patton who was started and then taken off; he turned this match when he hit 1-1 in the space of a minute just before McInerney’s normal time leveller.

STRONG WIND
Naomh Columba started with a strong breeze coming straight from the broad Atlantic, but it was Aodh Ruadh who had the brighter start.
But it was Naomh Columba who opened the scoring with a well struck effort from Ryan Gillespie in the 4th minute.
The confident Eric Carr added to that lead and an Aaron Doherty free made it 0-3 to 0-0 by the 8th minute.
Glen had a bit of a let off in the 12th minute when a Philip Patton free hit the post and the ball came straight to him.
His left-footed shot was fumbled twice by Glen veteran keeper Gerry McGill, but the danger was averted.
And, 20 seconds later, Ryan Gillespie added to that lead with a cooly struck free.
Philip Patton got Aodh Ruadh’s first point in the 17th minute from a free.
But, Aodh Ruadh had a wonderful chance of a goal in the 25th minute when Nathan Boyle’s soaring free into the breeze fell for Diarmuid McInerney on the edge of the square, but his punched effort from point blank range came back off the crossbar.
But David O’Donnell, Gillespie and Doherty added further points as Glen turned over with a 0-7 to 0-1 lead at the break.
Two quick McInerney points narrowed the gap to 0-7 to 0-3, but Glen’s David O’Donnell edged them further in front in the 35th minute.
Aodh Ruadh had their third goal chance, but veteran Gerry McGill brilliantly denied Eamon McGrath at the expense of a 45, and Nathan Boyle cooly converted in the 37th minute.
But big Paddy Byrne then landed two monster frees into the breeze to put Glen into a 0-10 to 0-4.
Rooney’s goal was quickly cancelled by Gillespie’s fine strike for Glen.
And that looked to be the clinching score until Patton was put back on and he got on the end of a brilliant move to crash the ball to the Glen net in 55th minute.
He quickly added a point as Aodh Ruadh attacked in waves before McInerney took this superb contest to extra time.
Both teams looked out on their feet, but Aaron Doherty who was fairly well policed by Eddie Lynch then showed his genius with a superb point from the wing to put Glen ahead by a point in extra time.
But, Ryan Gillespie hit the post with a close in free and Aodh Ruadh keeper Peter Boyle made a timely save under the bar from Kenneth McNern.
And his brother Nathan showed nerves of steel as he converted a free into the teeth of the gale as the sides faced into the second period of extra time.
The breeze and the momentum were with Aodh Ruadh as McGrath pulled the final trigger on this epic encounter.
Glen had a final chance, but Gillespie’s shot hung in the breeze as Aodh Ruadh held out for a memorable victory.