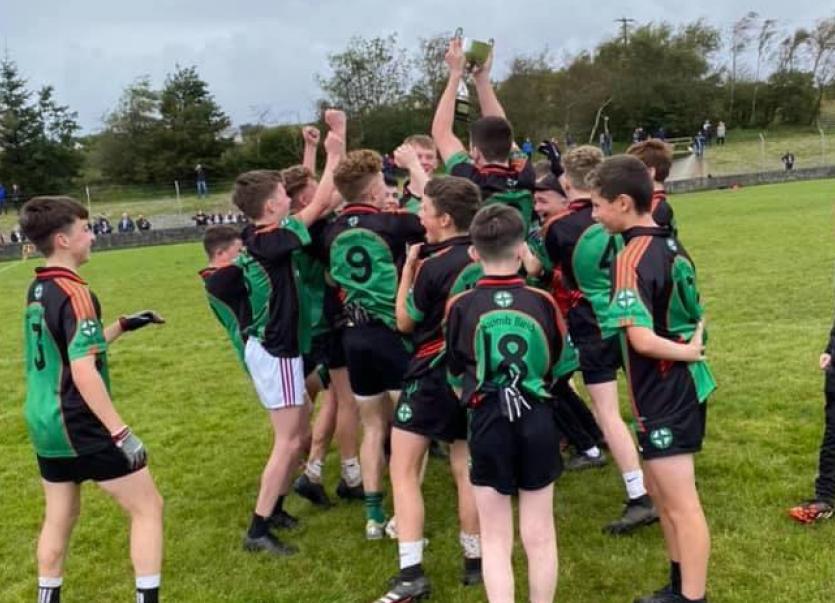 Amid great celebrations, Naomh Bríd/Pettigo were crowded Division 2 U-14 Southern Board champions in Dunkineely on Saturday.
Naomh Brid/Pettigo opened with the first score, a great point from captain Cale Breslin, but Ardara hit back with three unanswered points.
Next up was a penalty, well taken by Callum McCafferty after Jamie Anderson was fouled in the square. Then on 14 minutes Callum McCafferty got a black card for a trip on an Ardara player and they pushed on and scored 1-2.
Naomh Brid/Pettigo came back with two points from on-form Oisin Brogan and Eoghan Gallagher but another Ardara point left them ahead at the break 1-6 to 1-4.
Ardara hit a purple patch in the third quarter, scoring 1-4 to Naomh Brid/Pettigo's goal from Oisin Brogan shortly after the water break, which left Ardara seven points ahead.
But Naomh Brid/Pettigo dug deep and an excellent goal by Eoghan Gallagher brought them back into the game, either side of points from Jamie Anderson and Oisin Brogan.
It was left to captain Cale Breslin to seal a brilliant victory with the final point.
This  team has had a phenomenal record in Dunkineely as this was their third time lifting a divisional title there - U-12 (2018), U-13 (2019) and now U-14 in 2020. This team have been managed from U-8 by the outstanding management team fo Lorcan McGrory, Declan McCafferty and Brian Gallagher, a great day for the club and parish.
Man of the match was Oisin Brogan.