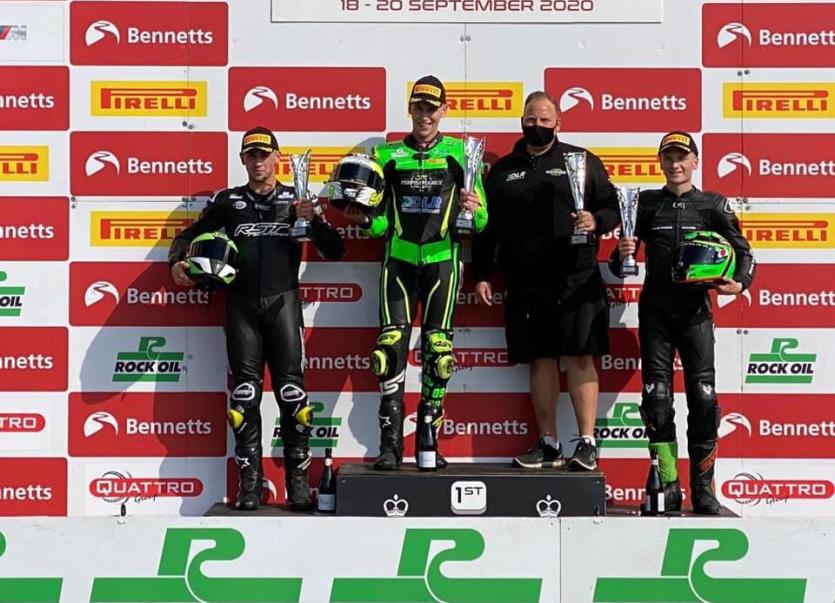 Caolan Irwin on the podium

Another unforgettable weekend for the Irwin brothers at British Superbikes Oulton Park in a double header this weekend.
Caolan with very fast qualifying times took double podium finishes of third place in both races, setting the fastest lap of the weekend in race 1, with his first pole position of the series in the second race. A jubilant Caolan, who previously has had bad luck at Oulton, was delighted to have got rid of the problems he was having with his bike in the last round.
Younger brother Rhys also on flying form qualifying on the front row was forced onto the grass in the first race losing valuable points for his championship but still managed to finish well within the top ten in 7th place in race 1 and 4th in race two.
With Rhys and Caolan running third and fourth consecutively in the full grid Championship they are both over the moon with this year's performance to date.
In their post race interview both boys acknowledged thanks to their sponsors who without their support they wouldn't be able to contest the championship James Gallagher of Oasis Bar Letterkenny, James Gibbons, Wesley Regan Sligo, Denis Sheridan DS Waste Kilmacrennan, Motorcycling Ireland, Mondello Park & Team Astro racing.