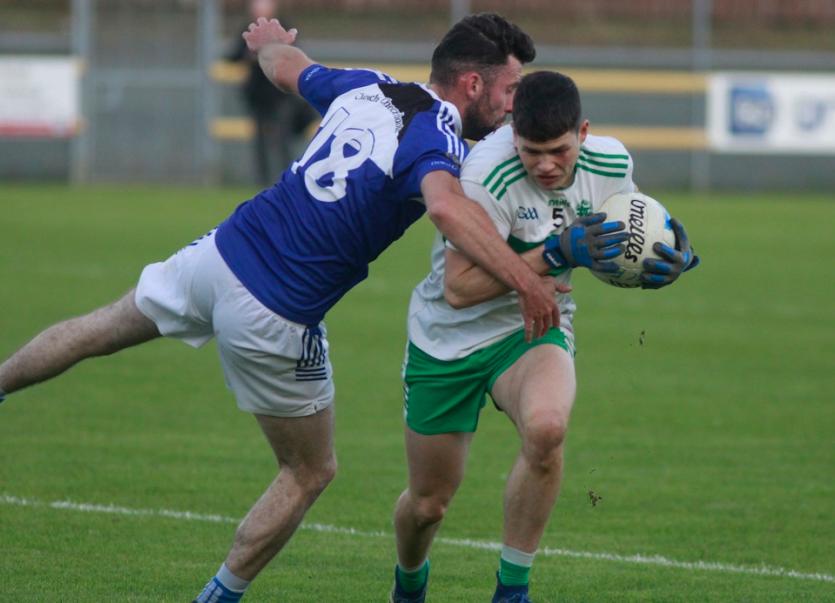 A big mistake by Cloughaneely goalkeeper just after the second half water break gifted Aodh Ruadh a goal which put them on their way to the Intermediate title and a return to senior football after a 10-year hiatus.

After getting the goal, Aodh Ruadh never really looked like being caught and they could add another goal from Cian Dolan to win by five. You have to have sympathy for Cloughaneely 'keeper Shaun McClafferty, who's kick-out was intercepted by Shane McGrath, who expertly finished.
The big turning point put Aodh Ruadh three clear at a vital stage. Indeed, three points was the most that was ever between the sides with both sides having the lead, Aodh Ruadh early on and when Paul Sweeney twisted to fire to the net before the first half water break, Cloughaneely had held the upper hand until McGrath's goal.
Apart from the goal, there were also a couple of other big moments. Peter Boyle saved a first half penalty from Darren McGeever while David McGurrin came in to hit two great points for the winners in the second half.
Darren Drummond also had a big game for the winners, hitting three points and getting the vital interception near the end which saw Aodh Ruadh hit the second goal
The game was marred by a late red card for Cloughaneely but Aodh Ruadh were worthy winners in what was a very close game for most of the game.

PROGRAMME NUMBERS
Aodh Ruadh made a mockery of the match programme by completely changing their numbers which should rightly bring a hefty fine.
The Ballyshannon side got off to the better star with three points in the first seven minutes and they could have had a goal.
Darren Drummond had the opening point and Philip Patton added a second with a goal there for the taking. Darren Drummond added the third point.
Cloughaneely got up and running to level matters on 11 minutes with points from John Fitzgerald, Shaun Maguire and Martin Maguire.
They had the chance to go ahead a minute later when Paul Sweeney was pulled back as he got on the right side of the defender and the referee pointed to the spot. The kick from Darren McGeever was poorly hit and Peter Boyle made a good save.
Aodh Ruadh hit back with points from Shane McGrath and Philip Patton. However, Patton's point should have been a goal with David Dolan through but his effort came back off a post for Patton to take the score.
Then the first twist came with Cloughaneely edging into the lead thanks to goalscorer in chief Paul Sweeney. He got on the end of a through ball and managed to fire home.
Ciaran McGeady pushed his side two clear but Aodh Ruadh responded with two Philip Patton frees and Diarmuid McInerney pushed the Ballyshannon side in front.
But it was Cloughaneely who finished the half well with two points from Shaun Curran (one a free) to leave the north Donegal side one ahead at the break.
Cloughaneely 1-6, Aodh Ruadh 0-8
Nathan Boyle levelled for Aodh Ruadh inside two minutes of the second half a magnificent free from close on 50m. Jason McGee should have scored at the other end after finding an acre of space but pulled his shot wide. Eddie Lynch made a great block to deny Ciaran McGeady.
Martin Maguire edged his side ahead again and Jason McGee added another from a free.
Oisin Rooney did well to beat two defenders to cut the deficit to just one point on 39 minutes.
Jason McGee missed a very convertible free and David McGurrin, not long on the field, did very well to find space and he took his point to level matters before the second half water break - Cloughaneely 1-8, Aodh Ruadh 0-11.
Then came the big turning point when Shaun McClafferty's kick-out was intercepted by Shane McGrath, who expertly found the net with McClafferty stranded.
The Ballyshannon boys quickly added a point from Darren Drummond and Nathan Boyle found the range from just inside the '45' to go five clear.
Jason McGee converted a free and then converted a '45' to cut the lead to three points with less than two minutes of normal time left.
Cloughaneely hit three wides as two minutes of seven added minutes were played. The extended extra-time was due to a injury received by John Fitzgerald midway through the half.
Aodh Ruadh edged four clear again after good work by David McGurrin to fire over.
Martin Maguire cut the lead again to three and Shaun Maguire cut the lead further with almost 37 minutes played. Needing a goal, they were turned over on the next attack by Darren Drummon and Aodh Ruadh went forward to hit a second goal with Cian Dolan tapping home.
With tempers becoming frayed Jason McGee saw red in the closing stages before Siobhan Coyle blew for time.
Joint captains Nathan Boyle and Johnny Gethins were presented with the Cathal McLaughlin Cup for the very first time.