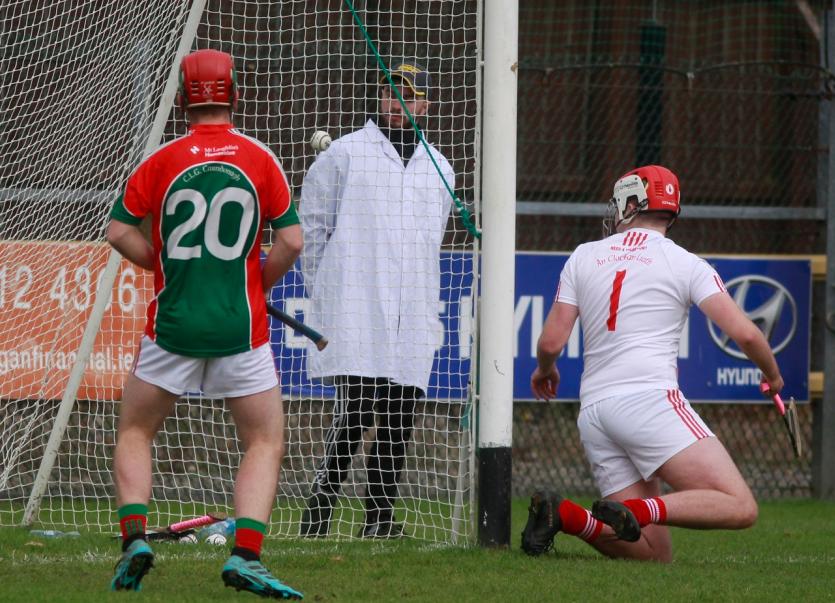 Carndonagh are celebrating a first junior championship success in a quarter of a century following this afternoon’s two point final win over Dungloe, in O’Donnell Park.

John O’Donnell, the team captain, and Dermot McGonigle scored the goals for the champions in a cracking contest that was in the balance until the finish.

Carndonagh’s last success was back in 1995, with Pettigo the opposition. This time it was Dungloe, first time finalist in the club’s first season fielding a team in the adult championship.

The champions got off to a good start with a goal from John O’Donnell inside two minutes. The team captain first timed to the net from a tight angle after good approach play up the right wing.

Cathal Doherty knocked over two more points for the Carn men, both from frees and O’Donnell added a point for a 1-3 to 0-0 lead by the ten minute mark

And Doherty, who ended the game with six points, converted a close-in free before Richie Ryan landed first score a point from 40 metres.

The man from Ahane in Limerick had minutes earlier cracked a shot of the post and Eoghan Kelly blasted wide at the other end with the goal gaping.

Carndonagh led 1-4 to 0-1 at the first waterbreak. Matthew O’Donnell and Ryan clipped over points to make it a four point game, with a little under ten minutes left in the half.

But Carndonagh were displaying a little better stick work and were seven in front with the clock ticking on the half hour mark. Dungloe finished the half strong. Ryan landed two monster frees from all of 70 metres and one from close in for a 1-7 to 0-6 half-time lead.

The men from the Rosses went toe to toe with the Inishowen in at the start of the second half.

Sean McGee, who was on fire in the second half and Cathal Doherty traded points before Ryan converted from a 45 to reduce the Carndonagh lead to three points, 1-8 to 0-8.

But the fat was in the fire shortly after when Matthew O’Donnell finished off a brilliant move with a super goal, to tie up the contest 1-8 each.

That was on 39 minutes and set up a frenetic closing 20 minutes as the play swung from end to end.

The more experienced Carn men had edged two in front again by the second water break as they led 1-11 to 1-9.

And when Dermot McGonigle struck Carn’s second goal with under six minutes remaining the lead was out to six points, 2-12 to 1-9.

But Dungloe were far from finished. Sean McGee struck for goal number two to reduce the lead to three and when Ryan converted two more monsters, it was a one point game once more.

It took an injury time point from man of the match Doherty to settle Carn’s fraying nerves.

Carndonagh took the spoils. But Dungloe left O’Donnell Park, with their heads up and with a host of new admirers.