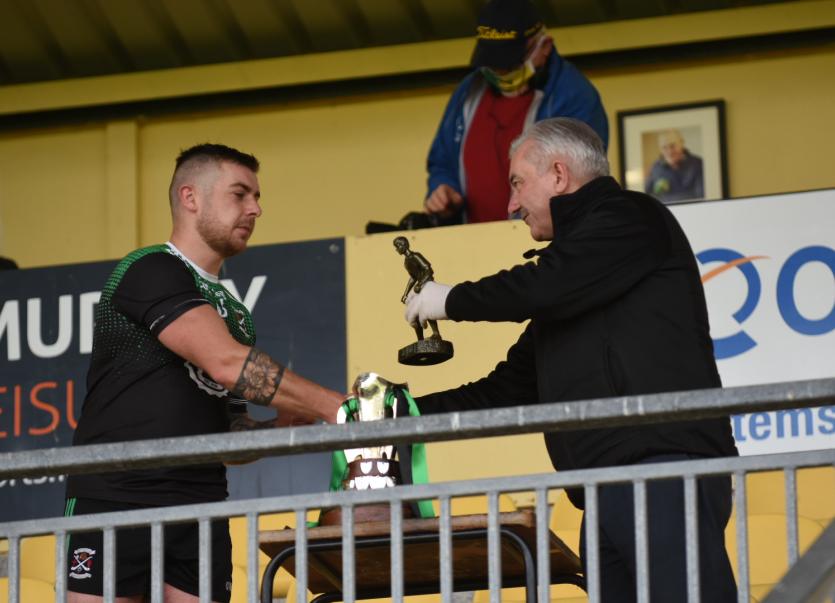 Fabulous Davin Flynn turned in a superb display as super Setanta took their second title on the trot in impressive fashion in O’Donnell Park, Letterkenny

Man of the Match Flynn showed real ash artistry and six of his seven points came from play.
He was well supported in a stellar forward line by Gerard Gilmore, Declan Coulter, Marc Devin and Bernard Lafferty.
At one stage it looked like this was going to be a total annihilation as Setanta steamed into a 2-14 to 0-9 lead, ten minutes into the second half.
But two late goals from St Eunan’s Kevin Kealy put a thin gloss of respectability on matters.
For there was never any doubting the absolute superiority of the winners who had far too much skill and steel against a gritty Eunan’s side who gallantly refuse to die.
And Setanta had a great start to build momentum, but if Niall O’Donnell and Conor O’Donnell had been available even coming off the bench, Eunan’s would have mounted an even sterner challenge.
Both brothers were part of the county squad senior football squad that was playing Mayo in a challenge match.
Setanta took off like a rocket and the flying Davin Flynn hit a cracking point for the winners after just 14 seconds.
It got even better for the Finn Valley men when Niall Cleary’s long ball hung around the Eunan’s square without being cleared.
A number of players hovered over the ball before Devine smartly whipped the sliotar to the net.
It was the perfect start for the hot favourites who showed that they have one of the best ever forward lines in the county.
St Eunan’s marksman Conor O’Grady converted a free for the shell-shocked youthful Eunan’s side who never really looked like troubling this slick and steely Setanta side.
And it took a brilliant save from Eunans’s keeper Cian Hennessy to deny Setanta another certain goal which was deflected behind for a 65 which Declan Coulter cleverly converted.
Coulter followed this up with a point from play to put them into a 1-3 to 0-1 lead.
The impressive Gerard Gilmore then sprung into action and hit the first of three cracking points on the trot.
The inevitable O’Grady converted a second free to make it 1-4 to 0-2 for the winners.
Coulter, Gilmore and Flynn extended the lead for the winners with O’Grady replying for Eunan’s.
It took Eunan’s a full 22 minutes to get their first score from play, but it was Setanta who ended the half with a memorable display of accuracy.
Richie Kee, Bernard Lafferty and Danny Cullen were all on the scoring sheet as the winners led by 1-13 to 0-5 at the break.
Fabulous Flynn had the first say early in the second half, but it was St Eunan’s who went on a bit of a run with three rapid fire points from Kevin Kealy, O’Grady and Hilferty to leave Setanta leading by 1-14 to 0-9.
But Setanta full-forward Josh McGee then struck for the crucial goal that effectively sealed this encounter.
McGee gathered a long ball from Marc Devine and crashed the ball to the net in the 38th minute to put Setanta into a 2-14 to 0-9 lead.
But they eased off and took Declan Coulter and Niall Cleary off and only hit five more points from Flynn and Coulter as Eunan’s finished strongly.
Kevin Kealy got the first of his two goals in the 45th minute and Eunan’s had a penalty in the 49th minute when Kealy was fouled, but Setanta keeper Ciaran Bellew made a brilliant save.
Eunan’s then got a second goal as Kealy scrambled the ball to the net and O’Grady’s rasping shot flew over the bar to leave just six points in it at the end.
But this was not a true reflection of a superb Setanta side’s absolute superiority, and their sorcerer called Davin Flynn.