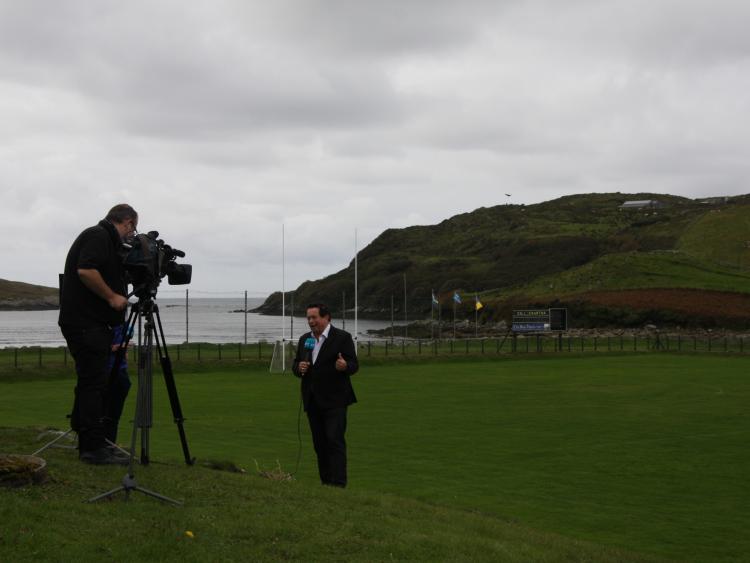 RTÉ sports broadcaster Marty Morrissey visited Donegal this week to compile a package on the postponement of the senior final. He is pictured in Kilcar along with cameraman Shane Wallace

It is disappointing that the County Final between Kilcar and Naomh Conaill is off. I was really looking forward to it but sadly Covid-19 has put an end to it going ahead for now.
It is a pity we didn’t get it played last weekend. I had suggested it be played in Donegal town or in Ballyshannon if they wanted to take it out of Ballybofey.
It seems there were big numbers of people in the area to test positive for the virus. But the suggestions weren't taken up and we have missed out by a week.
Let me hasten to add, I think going to Level 3 was the right decision because of the number of positive test results here in Donegal and all over the country.
But that still does not dissolve my disappointment and especially my disappointment for the players and managers in Kilcar and Glenties.
It’s a nightmare for them.
And the decision they now have to make is how do they continue to prepare and train for a game when no-one knows when it will be played.
Croke Park have said the remaining county finals - I think there are six or seven around the country - will be played once the county teams exit the championship.
Hopefully we will have a good long run in the inter-county championship which is still going ahead next month.
It may go ahead but who knows if it will be finished. I won’t be putting any money on it being completed this year.
Mention of Donegal seniors, they played Mayo in a challenge game in Sligo’s Markievicz Park on Saturday.
James Horan fielded a very strong and familiar Mayo side with only one newcomer. The rest were all the well known names.
I didn’t get the Donegal team, But I saw in a report that Donegal led by a few points at half-time but were overtaken by Mayo in the second half.
I’m led to believe Donegal were the better team in the first half though a little rusty which is understandable given the lengthy lay-off.
Declan is supposed to have made five or six or changes for the second half and Mayo won the game by four or five points.
There has been a lot of chat and a lot of disquiet about this game being played at all, albeit behind closed doors.
The general feeling among the public is that it should not have been played and especially with Donegal in lockdown and Sligo having one of the lowest levels in the country.
On balance, I would have to say I don’t think the game should have been played given the big rise in numbers in the pandemic.
But I can also understand Declan Bonner’s reason for wanting to play it. And if I was the manager and in something of a contradiction, I would more than likely have done the same.
Because of the delay with the club championship Declan had lost two weeks and besides Donegal needed match practice.
Donegal have two big games coming up in the league before they face Tyrone in the championship at the beginning of next month.
They face Tyrone on Sunday week in Ballybofey and Kerry the following week in Kerry.
They need two points to make sure they retain Division One football. And the reality is a lot could hinge on the Tyrone game because I wouldn't like to be heading to Kerry the following weekend needing two league points.
Finally this week I appeal to all followers and supporters if they want the games to continue, please heed the warnings and stick religiously to the regulations and continue to wash your hands and wear face masks. The next couple of weeks will determine a lot.