THE BREAKING BALL: Change is inevitable, so let's get on with it 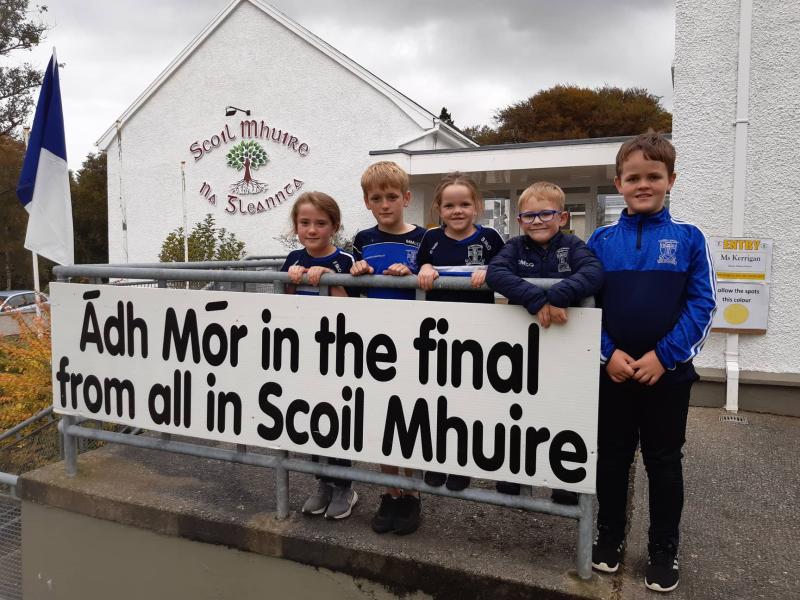 Pupils from Scoil Mhuire, Glenties showing their support for Naomh Conaill ahead of the Donegal Senior County Final

Last Monday morning the GAA announced that all club activities for both the men and ladies game would be suspended with immediate effect, training could continue but only within the strict guidelines that have been set down by the advice from both government and NPHET.
To be fair to the management committee of the GAA they were quick out of the blocks after a number of incidents occurred after county finals, considering that last Sunday evening information was being circulated that NPHET, the medial committee responsible for coming up with solutions to stop the spread of the virus, where about to recommend that the country would go to level five.
Which was more or less another lockdown. At the same time that people in the country were coming to terms that there maybe another lockdown, videos appeared on social media of celebrations by Cork’s hurling champions Blackrock, where hundreds of people were greeting the players and other supporters coming back with their championship trophy.

Crowd control
There were little or no masks on view and there was certainly no social distancing. There were also criticisms about the crowd control at the Meath county final which was aired on TG4. Clearly it showed very little space between supporters who had seemed to gather in one area of the stand and there where certainly question marks around the number of supporters present at the game.
In the last few weeks there have been plenty of other videos and images showing teams celebrating along with other club members and supporters, because of the social distancing rules this has not gone down well especially when you consider the huge rise in cases in the last three or four weeks.
Of course no one goes out on the day their club are in the county final to break any rules or put sick or elderly people in any harms way, however on winning a championship regardless of what restrictions are in place, the emotion of that victory kicks in and people lose the run of themselves. It’s a brave men or women that will step in and tell them to take a step back and consider the consequences.
As we are all well aware there are and always will be those people who believe that the rules do not apply to them and continue to do what they want. Sadly everyone pays for it. The Donegal county final was due to be played on Sunday.
It was cancelled because of a player contracting the virus and then at least ten days had to elapse before the game could go ahead, it was fixed again for the October 11. Now who knows? Both sets of players and management teams will continue to train in the hope that the game goes ahead sooner rather than later, but how long will the county board be able to keep it on hold before they have to call it off.
It is easy to blame those teams that have been caught out on social media within the last few week’s but because things were going good through the summer months, everyone let their guard down and the habits of old started up again. Now it’s coming back to haunt everyone once again, and everyone involved has to take some responsibility.
While adults have enough common sense to understand the situation we find ourselves in, what about the kids? For many teams their entire summer sport has been crammed into a few weeks and now with the end of their competitions in sight all is called off again.
It would be easy to conclude that school sport will be put on the back burner and now it looks like they will have to wait until next year before they can get back to training and playing. What many might fail to understand, is once kids get out of the habit of going to train and playing games it’s hard to get them back.
They find new interests and considering we might find ourselves in the same position in terms of fixtures in the next few years how many will be lost to the game, and while county boards and fixture committees have done their best to accommodate everyone involved. Many underage fixtures and competitions have been left very late and it’s something that clearly has to be looked at for 2021. In fact the effect that the virus has had on sport has given the GAA a great opportunity to put a proper structured fixtures plan in place that allows equal opportunity for both adult and underage club and inter-county fixtures.
Instead of wishing how we want things to return to how they were, we need to accept that change is inevitable and get on with the challenges that come our way.

“The road of life twists and turn’s and no two directions are ever the same, yet our lessons come from the journey not the destination.”
Don Williams