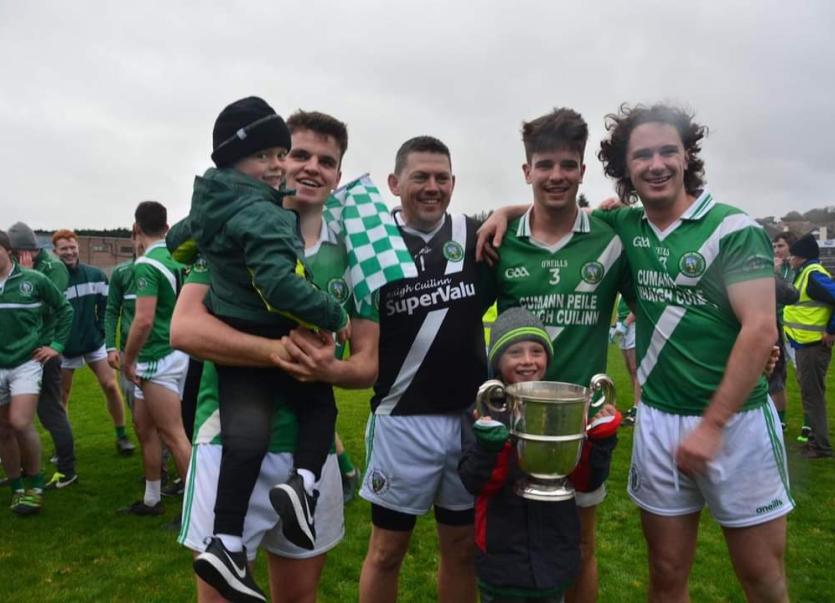 Seamus pictured with his cousins, the Kellys and his sons Iarlaith and Niall

A week has passed since the greatest sporting triumph by Seamus Friel in winning a Galway senior championship medal and he is much more relaxed: "By God this time last week my stomach was doing somersaults," says Seamus Friel, as he looks back on his greatest sporting triumph.
The Ramelton-native was in goals for Moycullen as they defeated Mountbellow Moylough by 2-12 to 1-11 in Pearse Stadium, Salthill, to lift their first ever Galway senior championship title.
Speaking a week to the day after the Galway final, Friel is able to relax and enjoy what unfolded.
"The weather was getting worse as the hours went on but it didn't turn out as bad as expected. It could be a calm day all over the country but there would be a wind blowing in Salthill. It kinda settled a small bit around 4 pm. But all's well that ends well," he says.
It has been a great journey for the 38-year-old Donegal man, who has spent most of his adult life in Moycullen, the home of his mother Philomena.
"I did my leaving cert in St Eunan's in 2000. We won a MacLarnon in my last year in St Eunan's. Colm Anthony (McFadden) was on that team, Rory Kavanagh, Neil Gallagher, the Cannings from Glenswilly, John McClafferty. We had a great team that year.
"Once I had the leaving cert done I was hightailing it to Galway. My mother is from Moycullen," said Seamus. Indeed, she is a sister of the former Galway great Padraig 'Dandy' Kelly, who sadly passed away at a very young age in 2001.
On Sunday last Seamus was joined on the Moycullen team by three sons of 'Dandy' Kelly as the club became only the third team west of the Corrib to lift a Galway senior title. One of those, Sean, was a goalscorer for Galway when the Tribesmen defeated Donegal in the National Football League in O'Donnell Park, Letterkenny back in February.
"I live close to them in Moycullen and when I finished college I built a house right next door to them," says the Clarin College, Athenry based schoolteacher. "I've been here since."
As Seamus acknowledges, Ramelton was not a stronghold of GAA. "Growing up I would have played no GAA or very little GAA until I moved to Galway. Apart from a couple of years in school it was all soccer with Swilly Rovers.
"I played Ulster Senior League with Swilly Rovers before I left for Galway. I spent my summers in Galway and would have played a lot of GAA underage in Moycullen at U-16 and minor. So I was always destined to stay here."
And strangely enough, for most of his career he was an outfield player. "I was wing forward on the MacLarnon team; then I played outfield until 2005 or 2006 until I moved back in goal.
"I think the long-term goalie in Moycullen retired so they were stuck, so I volunteered to go in and the rest is history.
"It kinda prolonged my career for another 10 or 15 years."
As fate would have it, Seamus had actually retired three years ago and winning a senior title with Moycullen was far from his thoughts. "About three years ago, I have two young kids and they were very small and it's a massive commitment, going training two, three times a week and then a game at the weekend. And then I was in school as well. I just found it tough to combine all those things.
"But I had always planned to come back this year, to get back involved again and even just to play a bit of junior. So I was back in February, but then Covid kicked in in March, so everything fell by the wayside. But then when things kicked back in June, everyone seemed to have more time and a bit more relaxed. And the season was much more condensed.

WE HAD A PLAN
"When we came back in June, we had a plan, a calendar and we knew what was happening. Thankfully, it ran off pretty smoothly from there on. And if it had been a week later we wouldn't have got the final played at all.
"My boys were a wee bit bigger now and they are mad into football and they have the lads (Kellys) next door that they idolise. That was another reason to get back. And things materialised over the couple of months and I found myself back in goals for the first round of championship against Micheal Breathnachs, that was back in August I think.
"The games came thick and fast after that," says Seamus.
Galway club football has been dominated by Corofin for the last decade or more and as James explains, most clubs have been setting their sights on meeting the multiple All-Ireland club championship winners, preferably in the knock-out stages towards the end of the championship.
"We might have hoped to get Corofin before a final, if that was to be, because you might get them on an off day, which Mountbellew did in the semi-final.
"But over the last couple of years I had noticed that Corofin were winning games, but last year it took a replay against Tuam before they got over the line and they only beat Mountbellew by a point or two the year before. We knew that they were definitely there to be taken if we came across them.
"But as it materialised we didn't have to worry about them too much. Don't underestimate it, they are a serious side, but we felt if we got them we might be able to match them."
While Moycullen has a strong GAA background, Sunday week's final was their first in 43 years.
"1977 was the last time we were in a senior final and we have been a senior team for the best part of 50 years. We went down Intermediate in '06 but we popped back up. We won the intermediate in '07 and went on to an All-Ireland in '08.
"And then we dropped back down again in 2013 and we lost to Killanin in an intermediate final in 2014 and then won the intermediate the following year.
"Apart from those couple of years in intermediate Moycullen was always a senior club. They just never made it to the final. Moycullen are only the third club west of the Corrib to win a senior title. Carraroe won it in '96 and Oughterard won it back in the '30s; that is an interesting fact which I heard in the last few weeks.
"We had played Mountbellew in the last couple of years and there has only ever been a point or two in it. We played them in the group stages this year, but that game ended up as a dead rubber as both teams were through to the final stages."
And they won their first title without one of their best players, Peter Cooke, who was not available.
"Yeah, Peter went off to America after the semi-final last year. But then on the other side of it we were missing Sean Kelly last year against Tuam. It kinda balanced it out. But then if you know you are missing these players at the beginning, you can work it out. And then we got Owen Gallagher from Antrim, he's a doctor in Galway and Tom Clarke from Knockmore in Mayo, he's a guard in Galway and he joined us too.
"I know we lost Peter but we definitely strengthened in other areas as well," said Seamus.
As for his new-found position as goalkeeper, Seamus is happy that he made the change. "If you mind the body at all, you will get a bit more out of the career. It is not the most strenuous but more mentally challenging. Even since I played a few years ago, the way the game has evolved, it is tactics down to within an inch of its life. Getting kick-outs organised. So definitely over the last couple of years, you have to be more aware, more tuned in throughout the whole game."
The custodian has decisions to make, especially on kick-out strategy. "We tried to balance it this year. You have to balance it against who you are playing. With teams pushing high up, we had the luxury of having four big men across the middle - Paul Kelly, Tom Clarke, Mark Lydon (who has been playing as long as I have) and young James McLaughlin. It is a luxury to have those four big men to take long kick outs to, knowing that they will win ball.
"And then on the other side of it, you have Sean Kelly in the full-back line, who is always good for short kick out, making space. It always makes it much easier when the lads in front of you are able to win ball."
When I tell him that he joins Paul McGettigan, who won with St Grellan's and went on to win an All-Ireland club title, Seamus says "they no longer field a team in senior.
"I haven't heard of anyone else (from Donegal) winning in Galway," says Seamus.
Married to Wexford woman, Lisa, the Friel name is likely to be part of the Moycullen GAA story for many years to come. Look out for the names of Niall and Iarlaith Friel in the coming years.