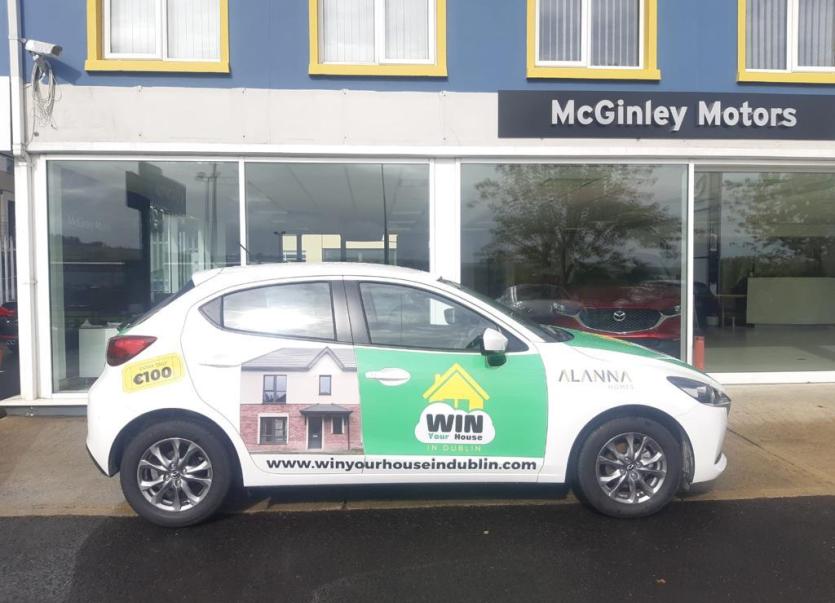 Mazda 2 from McGinley Motors, second prize in the Win Your House in Dublin Draw

With seven weeks to go to the Donegal GAA’s Win Your House in Dublin Draw, organisers are confident that all 15,000 tickets will be sold.

Top prize in what is the biggest fundraising drive ever undertaken by Donegal GAA and Club Donegal is a house in Dublin worth €400,000. Tickets for the draw, which takes place on Friday, December 4th in the Abbey Hotel in Donegal Town, are €100.

Draw coordinator, Joanne Dawson, said while it has been a difficult time to be running a fundraiser, the draw committee are extremely happy with the sales to date.

“Sales are going really well. We had a lot of overseas sales from New York and Boston in the last fortnight and we’re delighted to have passed the 10,000 sales earlier this month,” she commented.

“It’s a great achievement as it has been a difficult time to be running a fundraiser. We’re confident that we’ll sell the remaining tickets. We look forward to achieving what we set out to do and that was to raise the much-needed funds to complete what will be a fantastic facility for GAA teams in the county in Convoy,” Joanne added.

“We hope that the fundraiser will bring the teams great success,” Pat said.

“We wish the lads well over the coming months and we are looking forward to seeing the fantastic facility in Convoy being completed,” he added.

The next bonus draw will be launched on Friday, October 16th. Nine ticket buyers will each win nine tickets for the main draw in the bonus draw which will conclude on Monday, November 2nd.