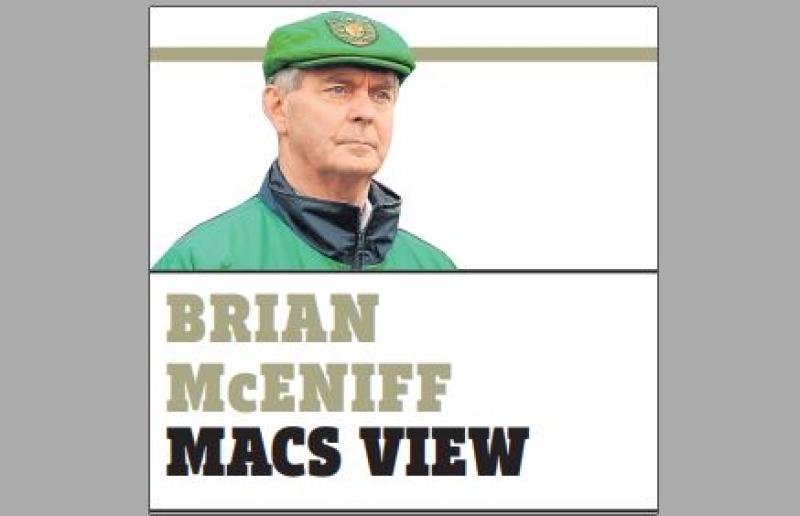 I want to begin this week by looking back at what was a great weekend for Gaelic football.
As you will know my wife is from Cork and I have Kerry grandsons, so the game on Sunday in Pairc Ui Chaoimh was always going to be a difficult match for me. Let's be fair, there is always a fair degree of good football in Cork and I can well remember what happened back in 1983, when a similar late, late goal ended a long run of Munster final wins by Kerry. The place was on fire in Cork for weeks afterwards.
There was plenty of talk afterwards about Sunday's win by Cork with a late goal. Conditions on the day probably had a hand in matters, but there was a great battling quality in that Cork team, the best I have seen for a while.
But then we must remember they have been good at minor and U-21 in recent years and the younger players have no problem with Kerry and are used to beating them.
Something like this was always going to happen with Cork involved. They could field a team in West Cork alone, they have so many clubs there, and it is the home of Cork football.
I was surprised by the result, but then again I wasn't surprised. On a dry day I have no doubt that Kerry would have won.
It wasn't the greatest game we have witnessed, but it was a good day for football.
Cork were down by two points on a couple of occasions going into the final minutes. That was a big lead given the conditions on Sunday, but Cork didn't give in and they battled back.
They have to be given great credit for that alone. But, like ourselves, they need to forget about the win because Tipperary will not be an easy touch in the Munster final.
Clifford hit one great score but he missed two easy frees for Kerry, while Luke Connolly hit one brilliant free for Cork. I was surprised that he was only a sub.
It was a result which opens up the championship and showed what is great about the knock-out championship. The Back Door was brought in as an experiment a number of years ago and that has worked out well. It is hard for teams to be playing only one match. But for the year that is in it, the straight knock-out is working well and is very exciting.
I felt very sorry for Sligo that they had to pull out of the Connacht championship semi-final because of a Covid-19 outbreak. I'm led to believe that the players wanted to play.
It was a pity that the Connacht Council couldn't move the game back a week. There seemed to be a window with their final fixed for this weekend, which is strange. Indeed, it is not fair on Mayo having to play five weeks in-a-row.
And now Galway could win the All-Ireland only playing three games. It will take three games for Donegal to win an Ulster title. Indeed, Cavan will have to play four games if they are to win an Ulster title. There is an imbalance.
But overall, the straight knock-out has merits this year. We are down to 12 teams with a chance of winning the All-Ireland at the moment and that will be down to seven after the weekend.
Last weekend also Dublin looked very impressive but then Westmeath had very limited talent. Dublin are still an awesome force. They are a very fit and athletic team. Size will matter in this championship in the conditions. Cork have that type of size too.

IMPORTANT DATE
But all of that is unimportant to us. Our big focus is on Saturday in Kingspan Breffni Park and the meeting with Armagh at 1.15 pm.
The main thing I want to say is we must not take this game for granted, and Donegal supporters should not be taking Armagh for granted.
They came to MacCumhaill Park last year in the league and gave us a lot of trouble. We had to take (Michael) Murphy in to get us out of trouble.
It would be great to be back in an Ulster final and we have players enough and a big enough panel do achieve that.
Armagh will battle. Remember last summer we went to Mayo and were beaten in Castlebar in our last game, but Armagh had gone there just before that and should have beaten Mayo. They were victims of a few poor decisions that day.
Armagh are a tough team and always have been a tough team. They will be cynical enough, just like Tyrone and knowing (Kieran) McGeeney, they will be going man to man on our forwards. There will be nothing easy.
Hopefully we will have Patrick McBrearty back as he has had another two weeks to recover.
There is talk about the three in-a-row but I wouldn't be worrying about that. The focus has to be put on Saturday's game.
Armagh will start well and we need to start better than we did against Tyrone. I was worried when we were five points down in that game.
But we are building a new squad. I was talking to Bradas (Brendan O'Donnell) during the week and he was high in his praise of Jeaic Mac Ceallabhui, one of the newcomers to the panel.
I would be confident of a win but I would not underestimate Armagh in any shape or form.
I want to wish the Donegal hurlers all the best in their semi-final in the Nickey Rackard on Saturday and I'm surprised that it is on at the same time as the footballers. They should be good enough to defeat Tyrone and reach the final.
The ladies have to travel to Mullingar to play Waterford in what is a dead rubber. I thought they would not want to travel, given the present climate.
Finally, could I ask all Donegal supporters to get a ticket in the county's draw WinYourHouseInDublin. There are only a few weeks left and it looks as it will be a sell-out.