MARKSMAN: How did the Donegal players fare against Armagh in the Ulster semi-final in Breffni Park? 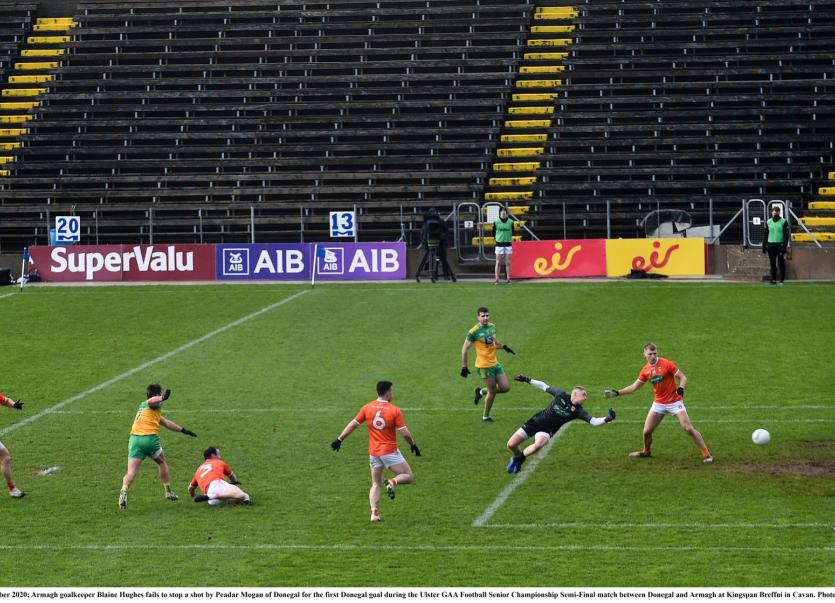 On a very good day for Donegal, the rating are reflected in the win over Armagh, with the first half one of the best witnessed for a long time.

SHAUN PATTON: Top class performance from kick-outs and dealing within anything resembling an Armagh goal chance. 7.5

STEPHEN MCMENAMIN: Pulled up after just two minutes. Hopefully will recover quickly but must be extremely doubtful for Ulster final.

NEIL MCGEE: What a warrior. Played as if he was a 19-year-old and a trademark shoulder coming out in second half. 8

EOGHAN BÁN GALLAGHER: Outstanding display by the corner-back and he got forward early on to fire over a good point. 7.5

RYAN MCHUGH: Back to his best, McHugh was clinical in everything he did. Easy to watch when he plays like this. 8

PAUL BRENNAN: Did everything asked of him while on the field. Not sure if he had an injury. 7

EOIN MCHUGH: In from the start, McHugh got through an amount of work in defence and attack. 7

HUGH MCFADDEN: Another massive display from the Killybegs man which included taking a point from a mark. Hopefully, he is okay for final as he was withdrawn near end. 7.5

MICHAEL LANGAN: Set the pattern with a point from the throw-in. Makes the game look so easy. 8

CIARAN THOMPSON: The workrate of the Naomh Conaill man was again impressive, covering back in defence and his tackling was top class. 8

NIALL O'DONNELL: The St Eunan's man showed what he can do. Learned a lot from Tyrone and made a huge contribution. 7.5

PEADAR MOGAN: What a contribution Mogan is making in the championship. His goal was a class effort and he finished Donegal's top scorer. Was given man of the match and I won't disagree. 8.5

CAOLAN MCGONAGLE: Worked very hard for the team, getting up and down the field and also on the scoreboard. 7

MICHAEL MURPHY: Was roughed up but got no frees, but still led from the front. His part in Mogan's goal cannot be underestimated. 8

JAMIE BRENNAN: Hit two points but overall, it was his workrate and tackling which really stood out. 8

JEAIC MAC CEALLABHUI: In after four minutes, Mac Ceallabhui looked really at home and very commanding when on the ball. 7.5

ANDREW MCCLEAN: Another big performance from the Kilcar man when introduced including a well-taken point. 7.5

PATRICK MCBREARTY: Great to see the Kilcar man back and he fisted a point within seconds. Was really involved for 20+ minutes. 7

JASON MCGEE: In for Hugh McFadden, the game was over as a contest at that stage, but will be happy to get a run. 7

OISIN GALLEN: Only getting in for final 15 minutes, Gallen still made an impact by getting on the scoresheet. 7