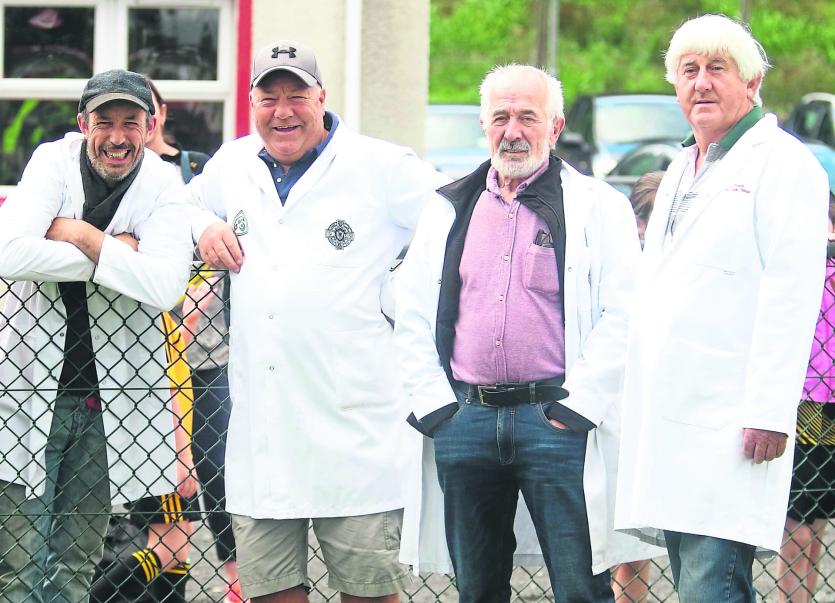 The late Donal Cannon (2nd from right) pictured with Francie Gallagher, Tony Byrne and John Murrin as they get ready to umpire at Fintra for Jimmy White

The death has taken place of Donal Cannon of Killybegs, known throughout Donegal and much further afield as a sportsman and especially as a member of referee Jimmy White's umpire team.
In his 70s, Donal was an exceptional sportsman in his own right, a goalkeeper who played for GAA and soccer teams.
His first success came with neighbouring GAA Club, Kilcar in 1964 when he won a Donegal Minor Championship, defeating Four Masters in the final 2-7 to 2-4.
And like another member of that winning team, Sean McGinley, Donal went on to play until his 50s.
He continued to play Gaelic for Kilcar in the mid-60s and also for the amalgamation of Kilcar, Killybegs and Ardara (St Patrick's) when there was no club in Killybegs and he was sub 'keeper on the Killybegs team that defeated Kilcar in the 1988 county final.
He was an ever present also between the posts for St Catherine's. Born and reared on Conlin Road, Emerald Park was a natural playing arena for the well-known Cannon family.
After his playing days he became even more widely known as an umpire with intercounty referee, Jimmy White.
"He never missed a game and along with John Murrin, was ever present from around 2003 until this year. Indeed, he officiated earlier this year before the lockdown," said Jimmy White.
"He was a great servant to both Killybegs GAA Club and St Catherine's and he always had a great interest in playing for the club, playing on until close to his fifties. He must have played for 25-30 years. He will be badly missed in the community," said White.
Jimmy recalled a memorable incident which involved Donal during an Ulster Club Championship game in Casement Park, Belfast, when a Crossmaglen Rangers forward scored a goal and the ball hit the green flag beside Donal and it popped up into Donal's hand.
"He had a great interest in travelling to games as an umpire, listening to players and supporters from other teams. He would have been well-known over a wide area.
"And as an umpire he was very firm but fair.
"He will be fondly remembered by a lot of football teams that he played against and played with and he gave great service to those clubs," said White.
A fisherman all his life, Donal is survived by his wife Mary and son David, daughter-in-law Suzanne; grandchildren Michael and Sienna; brothers Shaun and Pat; sisters Ann, Margaret, Brid, Kathleen and Sheila, brothers-in-law, sisters-in-law, nieces, nephews, relatives and friends.
Donal's funeral takes place on Sunday with removal from his residence at 12.30 for Mass in St Mary of the Visitation Church, Killybegs at 1 pm with burial afterwards in the local cemetery.