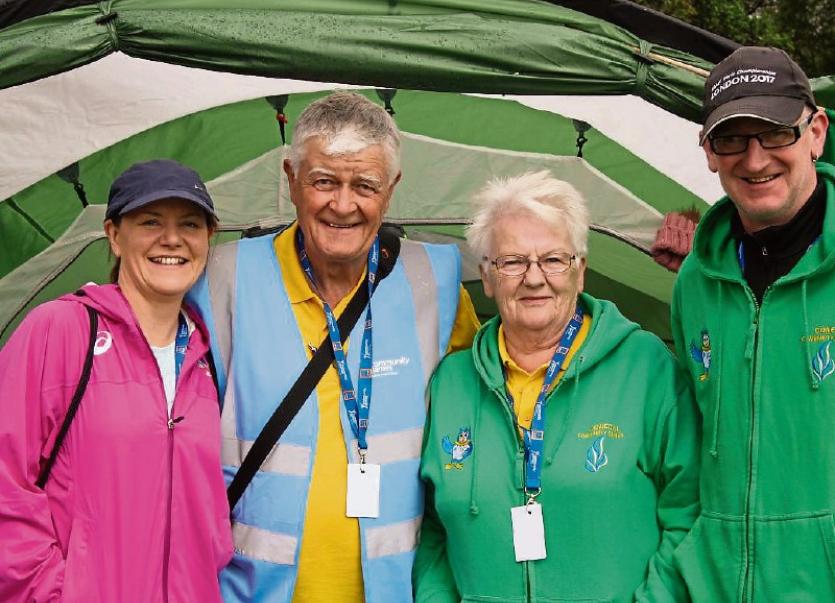 Michael Crossan pictured where he was really at home, working at the National Community Games finals along with his wife Mary; daughter-in-law Bernie and son Sean.

Donegal Community Games and the wider Donegal sports community are mourning following the death of one the leading lights of the Games in the county.

This follows the death last weekend of Micheal Crossan from Correnagh, Letterkenny and the Games current PRO.

From Drumgoon in Cavan, near Cootehill, Michael was laid to rest on Monday, in the New Leck cemetery following Requiem Mass earlier in the Church of the Irish Martyrs.

The late Michael Crossan, who was 73, he was due to turn 74 in February, had a long and distinguished career in the Community Games, both locally, at provincial level and nationally for over four decades.

He got involved first at local level in Letterkenny in 1979.

“Michael worked at sll levels from local right up to national and he was a great advocate for the Community Games,” said former National Community Games President and Donegal man, Gerry Davenport.

“He really excelled at PRO and won a number of national awards and really was fully deserving of the awards. He was a great believer in promoting the Games at local level and it was this promotion that saw the games grow to the level the Games currently enjoy.

“He has left a lasting legacy.”

He has held officer positions at all levels and has won awards and been honoured by both his peers in the Community Games and outside for his work in promoting the games.

And he won National Media awards in 2015 and 2016 in conjunction with the Donegal Democrat for his coverage of the Games in the local press and media.

He is survived by his wife Mary (nee Doherty, Lurgybrack). And not only was he known for the length and breadth of Donegal, he was admired and respected for his commitment and dedication to the games all over the country, north, south, east and west. He was really committed to the Community Games and the range of sports it offered.

“The great thing about the Community Games, you are not confined to just the one activity like most other sporting organisations offer,” he told the Democrat in an interview back in 2017.

“That is why the Community Games has been such a success and has grown to the organisation it has become over the last 50 years,” he added.

And the County Council honoured him when he received a National Adult Volunteer Community Games Award, to mark the 50th anniversary of the Community Games.

He is survived by his wife Mary and sons Sean, Michael, Paul, Brian and Karol and daughters Helena and Ann Marie and grandchildren. He is also survived by his brother Donal and sisters Mary, Ann and Helena and a wide circle of friends.