THE SPORTING DIARY: Disappointments, cherry pickers and great goals in 2020 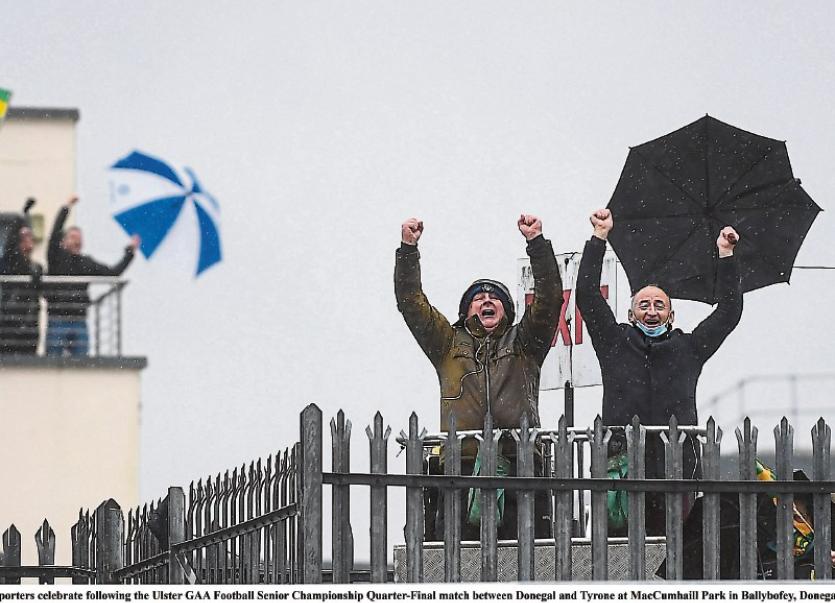 In the week that we say goodbye to 2020, many will say good riddance. We have had to endure a bleak year as regards sport, with many events postponed, more written off and some yet to be completed including our Donegal club GAA county final where Kilcar and Naomh Conaill await a date to see who will take home the Dr Maguire Cup.

Kilcar probably put on the performance of the year in defeating Gaoth Dobhair in the semi-final in O'Donnell Park, while Naomh Conaill, in typical fashion, struck for a late goal to get past St Eunan's, who are a bit like the Donegal senior team - they came up short again.

Perhaps the award for the team of the year should go to Finn Harps, who were going so well before the lockdown and then on the return to action, found themselves back in their usual relegation battle.

But Ollie Horgan's team found a rich vein of form, losing only two of their last 10 games, but their fate was not sealed until the very last game. The win over Waterford saw them even avoid their annual relegation play-off battle.

As for the manager, surely there is a strong case for Horgan being named Donegal Sports Star of the Year for his efforts to maintain the Finn Park residents at the top table against all the odds.

I normally get to chat to Ollie about once a year when our soccer reporters are on holiday or busy and his personality leaves you richer after the chat. He is infectious and his desire and drive is central to how his players have responded to him.

Everything was looking good at the start of 2020. Donegal were about to play Tyrone in the National League in Ballybofey in early March and victory would leave them safe in the top flight. Then it was a trip to Kerry and I had made plans to stay overnight in Listowel for the weekend.

That all had to be scrapped and by the end of March I was given a three month sabbatical. It was the first time (apart from the summer of 2015 for treatment in Galway) in 43 years that I had time to myself with no deadlines or weekend work. To be perfectly honest, it was the best three months in a long time.

The weather was great and there was plenty to do inside and outside. Anything that didn't move got painted. And when golf was allowed back in May, I returned to Bundoran and haven't missed a week since.

There were other ventures including re-locating old video tapes of games from 1990 onwards which were stored away in the garage, and trying to re-master them onto DVDs - something that was only a partial success.

The return of sport in July was welcomed, but not with the enthusiasm that is normally associated with games. There was plenty of good action with limited numbers of supporters allowed in. That, in itself, was a huge problem for club volunteers and the application of the rules differed from club to club.

When it came to the club championships, it became even more contentious with some supporters finding novel ways to see their favourite teams in action, some wading across rivers, some finding high vantage points and the award for the most novel goes to Malachy McCann of Buncrana who used his own cherry picker to get to see the Ulster championship game between Donegal and Tyrone in MacCumhaill Park.

I'm told that Malachy also got to see the Ulster final in the Athletic Grounds, this time without the cherry picker. Indeed, he rarely misses a Donegal game no matter where it is played.

With supporters deprived of seeing the action in the flesh, necessity became the mother of invention and streaming became the by-word of 2020. New-found Micheal O Muircheartaighs sprang up in various locations, some of them on their own cherry pickers, more of them in the vantage points that once were my place of work.

The aforementioned Ulster final on the first Sunday of November will be remembered as the low point of 2020. Donegal were seeking a first ever three in-a-row but their failure to perform on the day allied to meeting a Cavan team who were really up for the battle, led to a disastrous defeat. Their hopes of making the last four in the All-Ireland race was stymied for the third year in succession.

It came after two great performances against Tyrone and Armagh with magnificent goals from Michael Langan and Peadar Mogan in those games. Langan's, against Tyrone, was probably one of the goals of the year. The two wins had set them up as long odds-on favourites and some would say that they were distracted by the pundits saying they were the only real contenders to stop Dublin's six in-a-row.

Cavan were worthy winners and the sight of Michael Murphy looking on from the pitch as the presentation of the cup took place and of Neil McGee doing likewise sitting in the front row of the stand said it all.

It had happened before (and probably will again). Donegal have to pick themselves up and hopefully they will have a full deck next year with Stephen McMenamin, Odhran McFadden Ferry and Kieran Gillespie back. I would like to see Conor O'Donnell, Carndonagh fulfil his potential and hopefully Conor Morrison makes a full recovery. We need a quota of defenders who are full-time defenders.

I would contend that we have ample personnel from No 8 upwards, but we need to build from the back with defenders that have the skills, speed and size to match all comers.

Roll on 2021 and the draws for the Ulster championship!