Diarmáid McInerney - the tale of a real GAA club player 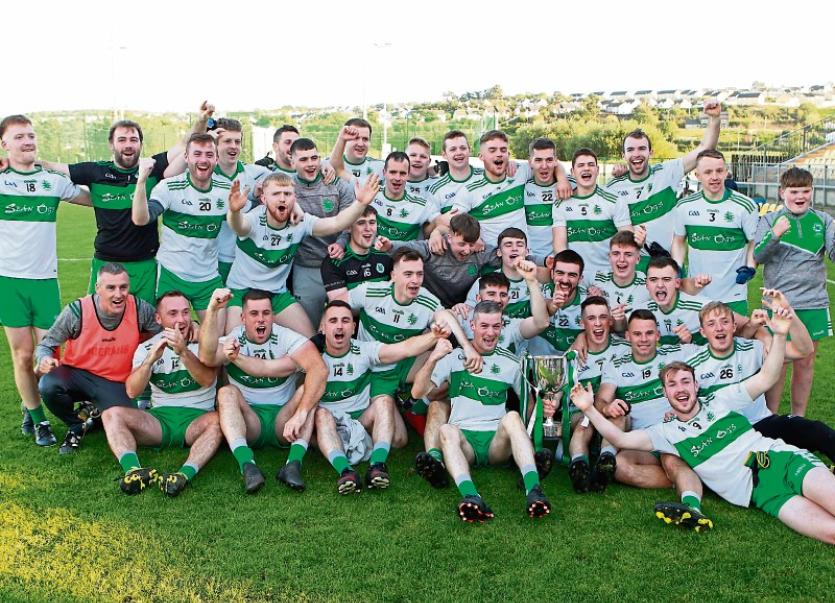 When you strive for 13 years for something, it is always sweeter when it arrives. That is the case of Diarmáid McInerney of Aodh Ruadh, who finally got a championship medal in 2021 when the Ballyshannon club won the Intermediate Championship on Saturday, September 26.

That is what the GAA is all about. A club player finally getting to win that elusive championship medal.

The win was consolation for the semi-final defeat against the same opposition the previous year in Convoy when McInernery hit three points to bring Aodh Ruadh back level and Shane McGrath put them ahead, only for Cloughaneely to go up the field in the final play and hit a winning goal.

"In the flick of a switch it was gone. At that stage I thought I was never going to win a medal," said McInerney this week as he looks back on the year.

"At a stage I was thinking, I'm playing football for 13 years and it's never going to happen."

Then Covid-19 arrived this year and things didn't look good. But McInerney says that when the championship arrived, they were ready for it.

"And to think it might not have happened at all; we were so lucky to get the final played," says McInerney, who is good friends with Mark McHugh of Kilcar, who are still waiting to play the senior final.

"It isn't as bad for them as they have been there before and won but we had been waiting so long and if the final hadn't been played, it would have been devastating."

McInerney is very grateful that it was and he is basking in the success and a really great year. He even moved into his new house in the week before Christmas, which is just a stone's throw from his work with MCM at Portnason and also close to town and the Fire Brigade, of which he is a member.

It all began for a young Diarmáid McInerney at underage at Aodh Ruadh and the Community Games.

McInerney featured on the back page of the Irish Independent in September of that year alongside a Ryder Cup story.

"Our only other underage success came as captain of St Joseph's NS, winning an Ulster title with Brian Roper presenting the trophy. But at underage level for the club I won absolutely nothing and I played every single year," said McInerney.

"The only other medals I won was when the Thirds started (2004) and I won an Intermediate Reserve Championship under Stephen Ward; we beat Carndonagh in a county final in Convoy in 2011."

McInerney mentions a special moment in that 2011 campaign, an equalising point against Bundoran in Bundoran with the last kick of the game. "My father walked out the gate, he was saying give it to Dermot Slevin. I stuck it and levelled the game and went to extra-time and we beat them," says McInerney, who said he turned around and he winked at his father. "I didn't have to say anything else."

The Aodh Ruadh man might not be sure of dates, but he has savoured any small successes that came his way, like a Player of the Year at Thirds, Reserve and Senior. "Under Packie McGrath, I got the Senior Player of the Year, it's five years ago now," he says, adding that there were Division Two and Division Three league medals also.

But there was a low point in McInerney's career, some six years ago, when he found it hard to get his place. "Maurice McLaughlin was manager. I was after coming back from injury and wasn't in great shape and I suppose I thought was in better shape than I was.

"I suppose I got the bit between my teeth. I started back at the golf and done boxing training from September. I had a point to prove to myself and everyone else. I trained from September right through and won Player of the Year at the end of it. I think that was all the sweeter," he says.

"I probably played my best football in the last five years, when I was in good shape. I kinda ended up playing that role of track and attack. I got as fit as I could and the role suited me."

The icing on the cake was supplied this year when Aodh Ruadh finally lifted the Intermediate title after years of heartbreak, losing in the final in 2018 and the semi-final in 2019.

For many years McInerney was the Aodh Ruadh freetaker but he was relieved of those duties in recent times with Philip Patton taking over and being free of the duty has probably been a factor in the half-forward delivering big performances for the club.

He credits Peter Gallagher for giving him his senior debut, a Division One league game against Kilcar in Towney. "I had two goals got in the first 15 minutes and I remember thinking this is easy. Well it was far from easy, as I found out.

"Packie McGrath, Val Murray, Brian Roper, all them boys were still playing at that stage.

McInerney will get the chance to play senior championship again in 2021 and he is already preparing for that. "I'm happy with this year, but I'm still training and will go back to play another year. If I can stay injury free, if I can get a place, I'll be there."

McInerney, on a line through his father, Ronan, should have been featuring for Ballyshannon RFC at outhalf, but he confesses that following in his father's footsteps was never a runner.

"Couldn't take to rugby at all. He tried up and down but I never liked it."

He did play a bit of soccer though and spent three or four seasons with Letterbarrow and enjoyed his time there (apart from the trips to Arranmore).

He also enjoys golf and is a handy nine handicapper (he got down to eight for a time). Every year also he enjoys a week skiing in the first week of February, although that will not happen in 2021 due to Covid. The sports mad McInerney also likes to do a bit of boating.

But it has been playing Gaelic football that has taken up most of Diarmáid McInerney's life so far. Indeed, it has included playing a full season with a broken bone in his ankle. "That was the year we went from Division Three to Division Two and Peter Gallagher used to say 'you have stones in your shoes again today'.

"Gaelic football has been my life. I have never missed training and I would be the last man leaving. I just live and breathe playing Gaelic."

"As for toughest opponent, that's a hard one. There are so many of them. I would say at underage Jamie Timoney of Naomh Brid and at senior level Paddy Peoples of Milford; Ryan McHugh, Kilcar and Kevin Cassidy, Gaoth Dobhair."

So 2020 will live long in the memory for Diarmáid McInerney and Aodh Ruadh. "The amount of faces that have come and went over the 13 years. I remember going to Muff with 14 men trying to stay in Division Three. People have come and gone. And the famous quote, I remember someone saying, no matter how much you hate it, you will do it all again next year," said McInerney.

It is a familiar story of the real club player.