Maxi Curran back as Ladies manager and waiting for white flag 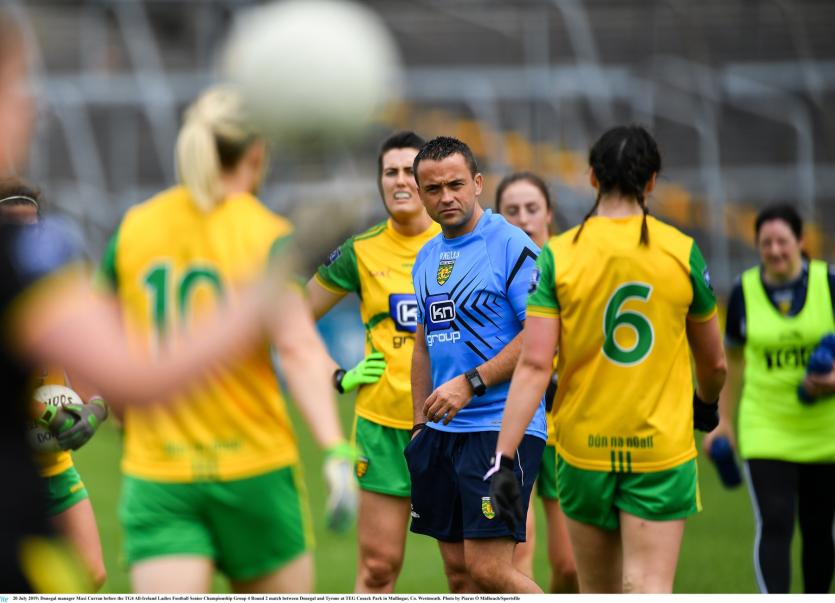 Maxi Curran is back as Donegal Ladies football manager once again after initially stepping down from the position at the end of last season’s championship.

The Downings’ clubman was reinstated at the Donegal Ladies Board annual general meeting held last week. He was the only nominee for the job.

It is the fourth year in-a-row he will guide the fortunes of the county’s finest lady footballers and one of the top teams in the country.

Maxi  has also been appointed coach of the Gaoth Dobhair senior footballers for the coming season. And he will work alongside new managers Kevin Cassidy and Joe Duffy, as they bid to revive their 2017 Ulster champions fortunes.

So it promises to be another busy year for the former Donegal minor and U-21 manager.

Well at least that is the hope. But with the coronavirus raging to scary new heights and the country, north and south, in level 5 lockdown, Maxi like many more managers, coaches, players and officials up and down the country, is unsure of what lies ahead in the weeks and months to come.

While  the Ladies National calendar has been laid out, the Donegal club calendar is less clear. Maxi is awaiting white smoke on the road map for 2021 from the Donegal Competitions Control Committee.

“There is talk of a single round of games in the league in the various divisions. Nine games, five at home and four away or four at home and five away and the championship like last year played at the end of the year. But we have heard nothing definite.

“Given the situation I think it is a sensible solution.”

However, the new Gaoth Dobhair coach does not expect to see any club action until May and possibly  June, and that depends very much on the speed of the roll out of the Covid-19 vaccines.

“It is looking like there will be no club action until everybody has had the vaccine. And it is likely that club players are more than likely going to be at the end of the food chain when it comes to getting the vaccine.

“And looking at the way the vaccine distribution is shaping up it is going to be well into the year before the vaccine gets as far as the players.

“But the whole thing is up in the air at the minute really, isn’t it,” he says.

“We are in lockdown and the word seems to be today that schools are not going to open next week. So with that in mind it is hard to know when we will see action.”

The Ladies national programme of games are mapped out. The Lidl Ladies League starts at the end of February. And like the Allianz National Football League, will be played off in March with the finals in early April. The leagues are followed by the provincial championship with the All-Ireland championships not played until the end of August or early September.

The break between the provincial championships and the All-Ireland series is a concern for the Donegal boss. But at least it is a road map and is something to go on.

Donegal are in Division One again this season. They were in fifth place with two games to play when the first lockdown came into being.

Mayo, All-Ireland finalists Galway and Westmeath are in Donegal’s group in the league.

It was a case of unfinished business and the totally unacceptable way the 2020 championship had gone that tempted Maxi back for another year in the Donegal hot seat.

“We were very disappointed with the way 2020 had gone and the way the championship was run.

“We were the Ulster champions from the year before going into the All-Ireland championship and as a consequence we felt we should have been seeded.

“We weren’t and we were drawn again Dublin, the reigning All-Ireland champions who were going for four in-a-row and subsequently went on to win the four.

“We felt we were not respected as Ulster champions and it was unfair to have to face Dublin in a one-off game.

“Obviously due to the virus preparations weren't great either and the long delay from the middle of March to the end of October meant we were not at match fitness.

“Overall it was just a bad experience and we felt we did not get a fair crack of the whip and when we thought about it we felt it was not the time to walk away.

“My initial reaction was to do that and I had called it a day. But I spoke to the girls and they felt they did not do themselves justice  and they still have the appetite.

“And when I weighed it all up and reflected on the Dublin game and how we had run them so close, and the  big win over Waterford in the other group game, I felt we were not far away. I simply had to stay on to give the championship another rattle.

“A couple of the older players may retire but no decisions are made yet. But other than Ciara Hegarty, who is working in Kerry, all of last year’s squad is back on board again for the season ahead.

“The girls are back training on their own in the gym. County players are allowed train and collective training as we speak is allowed again from next week. But with stricter lockdown measures expected that could be up in the air before the weekend.

“Who knows what is around the corner. It is far from ideal but we are just going to have to go with whatever lies ahead.”

And while a potentially hectic year lies ahead Maxi does not envisage his double job of Donegal manager and Gaoth Dobhair coach conflicting in any way.

“If the season pans out the way I expect it, there should be no major problems other maybe than good time management at the business end of the year. I did it before  when I was with St Eunan’s and there is no reason I can’t do it again.”