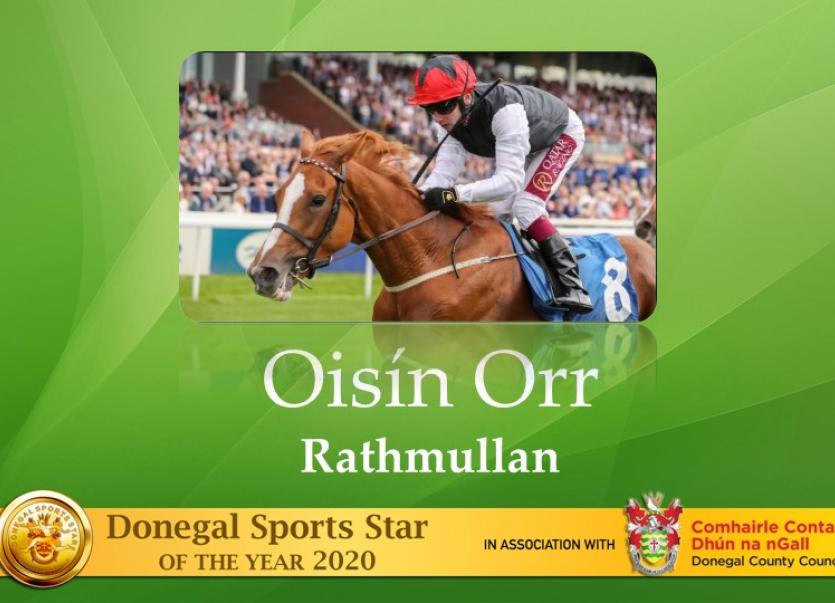 The 23-year-old headed off a number of other stars of 2020 to take the top honour in Donegal sport at the first ever Virtual Awards Show this evening.

He is the first jockey in the 45 year Donegal Sports Star Awards history to take the top award at the Donegal County Council sponsored show. His fantastic season included 39 winners on the flat racing circuit in Ireland while he also had success in Australia at the start of the year.

However, the undoubted highlight of 2020 for Orr was winning his first Grade 1 race at the Curragh in September. Oisin who is the first Rathmullan man to take the Overall Donegal Sports Star Award also won the Professional Sport Achievement which was the first category of the evening.

The historic virtual awards opened with a host of sporting stars featuring, including Jim McGuinness, Karen Guthrie, Jason Black, Anne Marie Ward, Mark English, Nora Stapleton, Seamus Coleman, Sinead Jennings, Packie Bonner, Chloe Magee, Michael Murphy, Amber Barrett and Shay Given. To the magical music of ‘The Homes of Donegal’ and the backdrop of some of the county’s most spectacular scenery the 13 men and women delivered sporting messages which were truly special.

It was a good evening for the Clonmany Tug of War club who won three awards including the ’Team’, ’Coach/Manager’ and ‘Appreciation’ categories. Gold and Silver medals at the World Indoor Championships at the Letterkenny Aura Leisure Centre last February saw Clonmany B land the top team honour while the master tactician Kevin McLaughlin was rewarded with the coach/manager accolade.

Last but by no means least in the Clonmany triple success was Danny McGonigle whose lifetime of dedication to Tug of War was recognised with the Donegal Sports Star Appreciation Award. There were two women honoured at the 2020 Awards with Fanad Gaels Club member Siobhan Coyle’s historic year being acknowledged with the prestigious Brendan McDaid Memorial Special Achievement Award. And Lifford/Strabane A.C.’s talented youngster Adrienne Gallen landed the Youth category title after winning a national Junior silver medal while the then 15-year-old also broke the Donegal senior hammer record. Adrienne's success this evening continues a special family link with the Donegal Sports Star Awards as her mum Sharon Foley was a winner eight times in 12 years.

The organisers of this evening’s show also remembered the late Hugo Duggan who passed away last month. Duggan won the Overall Award in 1988 and was inducted into the Hall of Fame in 2009. Chairperson Grace Boyle also paid tribute to Paul Blaney and Mickey McFadden, two founding members of the Donegal Sports Star Awards Committee who passed away earlier this month. The Cathaoirleach of Donegal County Council Cllr Rena Donaghey and the Local Authority’s Chief Executive John McLaughlin were guest speakers during this evening’s virtual ceremony.

Primary and Secondary Schools have been a huge part of the success of the awards since 1977 and this evening St. Bernadette’s Special School in Letterkenny and St. Eunan’s College were recognised for winning national basketball titles last year. The final award of the evening was the Overall category. A number of candidates who had featured very prominently in the local sporting media last year as a result of sporting successes 2020 were in the running. As the big announcement was drawing ever closer the excitement was building.

Declan Kerr the presenter of this evening’s virtual ceremony then revealed the name of jockey Oisin Orr as the 2020 Overall Donegal Sports Star Award winner after that historic Grade 1 success and 39 top class wins on the flat racing circuit last year. The Rathmullan man becomes the 42nd winner of the Overall Award and succeeds Race Walker Brendan Boyce who took the title in 2019.

A recording of the 2020 Awards can be viewed on the Donegal Sports Star Awards Youtube Channel.

Clonmany B Tug of War Team