MAC'S VIEW: 1992 - the Goal charity game; a special wedding, and a memorable week of celebration 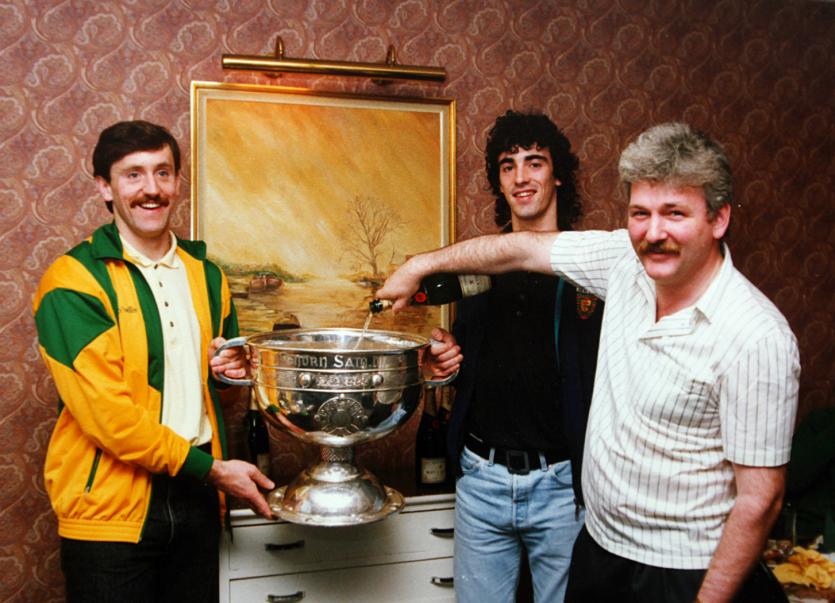 Over the past few weeks, Brian McEniff has been remembering the journey that brought Sam Maguire to Donegal for the first time in 1992 - how we won Ulster so impressively, beat Mayo and then got the better of Dublin in an epic final. The celebrations were perhaps just as memorable as that game itself, as the county came to a standstill to honour our heroes. In today's final column on the 1992 win, Brian recalls the final few days of that week of celebration - and even after all this time, has big regrets at not being able to last the pace because of illness

It was like the county came to a standstill in the days after our All-Ireland final victory over Dublin in September 1992.
So many people wanted to be part of the celebrations and as we brought Sam around the different towns and villages, the turn-out was amazing.
Even people who weren’t GAA supporters were out to greet us. It was fantastic.
By the Tuesday night, we’d landed in Ardara - the home town of Martin ‘Rambo’ Gavigan and of course our captain, Anthony Molloy.

Bart Whelan was there, managing affairs. It was a special night for so many reasons, and the town was packed.
At the end of it all, some of the players were trying to get home and I can remember organising lifts for a few of them.
I then realised I had no lift myself. At this stage, we were in the Nesbitt Arms and I remember asking about getting a room. But there were no rooms available. The place was booked out.
I ended up sleeping on my own in a child’s bedroom, with my feet sticking out from the bottom of the bed.
The following morning was Harvest Fair Day in Glenties. That was to be our destination that Wednesday. My problem was that I’d no change of clothes after staying the night in Ardara.
I arrived into Johnny Boyle’s in Glenties and I asked for a room because I had to take a phone call from Australia. I’d promised to do a radio slot for a station there and I needed to be on the show that morning.
I also had to pop into a shop to get myself underpants, a vest and a clean shirt. I got a shave and got tidied up and we headed to the Harvest Fair Day.
Glenties was the hometown of Jim McGuinness and Michael Gallagher, so it was a big day for the two boys and the Naomh Conaill club.
Again, the celebrations were brilliant - a fantastic day’s craic.
We went from there to Fintown, into Glenfin and after that, to Glenswilly and then into Stranorlar.
The players hadn’t managed to get much sleep since the weekend, but that evening, we had the annual Goal charity match which saw Donegal up against a Rest of Ireland team.
John O’Shea ran that charity event every year and our game attracted a huge crowd. I think there must have been 15,000 in MacCumhaill Park that night. 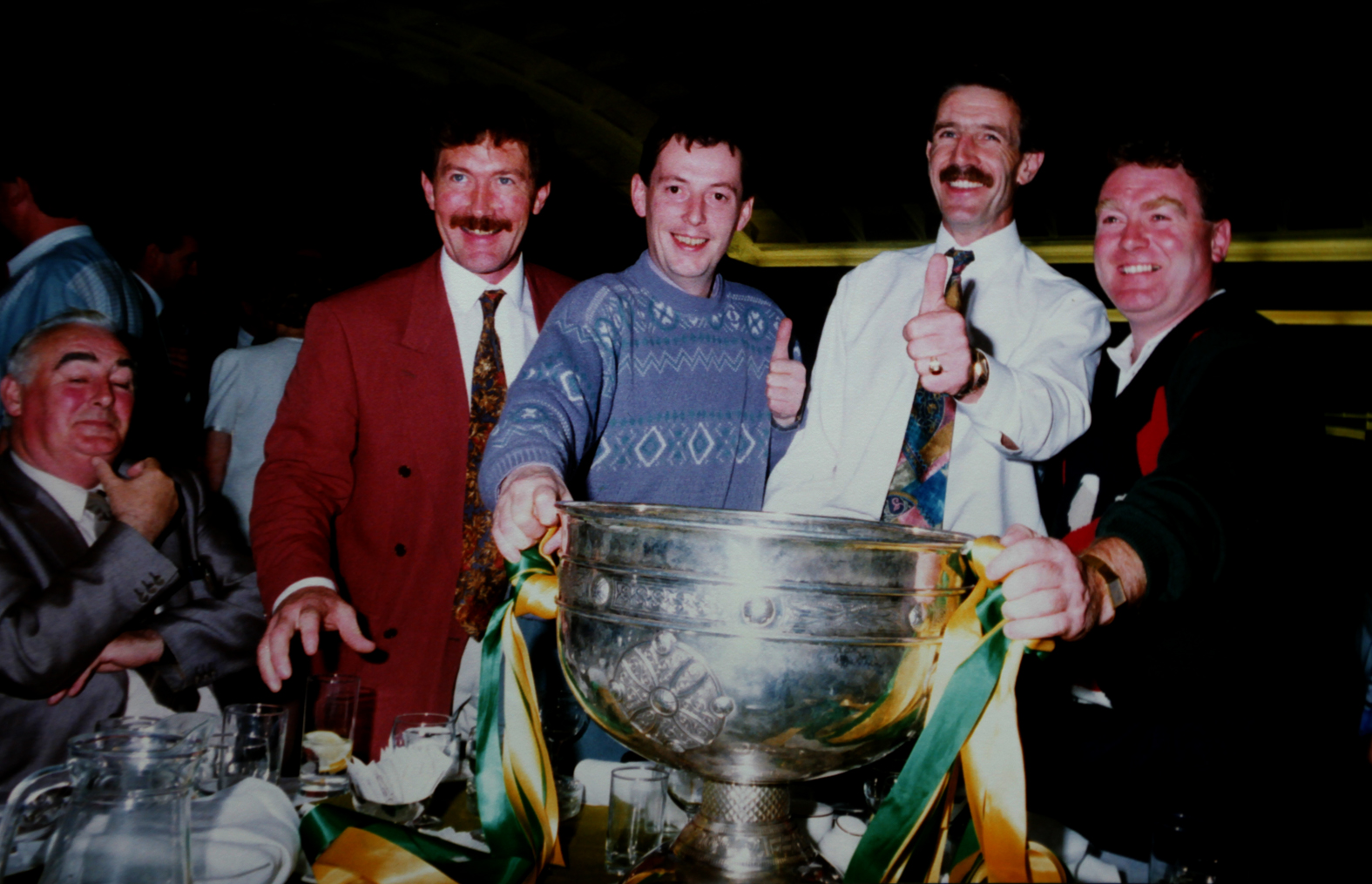 After the game, there was a meal in Jackson’s Hotel.
By the end of the night, I knew I’d to get myself home to Bundoran.
I’m not sure my wife Cautie realised the extent that the county would be going to with the celebrations. I don’t think she was too happy that I’d not come home the night before.
So I said to her that she should come along with me on Thursday. We were meeting that day at the Gweebarra Bridge. We were heading to Na Rossa - Declan Bonner’s home.

Dungloe
From there it was onto Dungloe. Again, that was a special part of the celebrations. Our chairman, Naul McCole was in his element, and of course the team included Tony Boyle.
I remember meeting Caitriona Sweeney of Sweeney’s Hotel, a good friend who had first introduced me to Cautie.
We went then to Gaoth Dobhair, a place that will always hold a special place in my heart.
I have so many good friends there - good GAA people.
We were supposed to have our lunch there, but by the time we arrived it was tea-time. It was a brilliant night, and when we left, we headed for Gortahork and Falcarragh where we were hosted by the Cloughaneely club.
I think that was the loudest reception we got. The supporters were brilliant.
We also stopped in Creeslough and then it was into Termon.
Again, it was an emotional stop on our journey. Tommy Ryan was sub in the All-Ireland final. He’d lost out to Manus that day. I’d named the team on the Tuesday night before the game and naturally Tommy was very disappointed. He gave great service to his club and county. A fantastic player.

Letterkenny
We went on into Letterkenny and I can remember speaking to Dr Jimmy McDaid at the Market Square. He had been our team doctor in the 1980s. We stayed in the Mount Errigal that night where my nephew Terry looked after us.
I didn’t feel great that night, and by the next morning, I was in bad form. I’d a fever.
We were going to Inishowen that day, but there was no way I could make it. I was so disappointed because I wanted to be part of the celebrations in Inishowen - a place where GAA was really beginning to flourish. 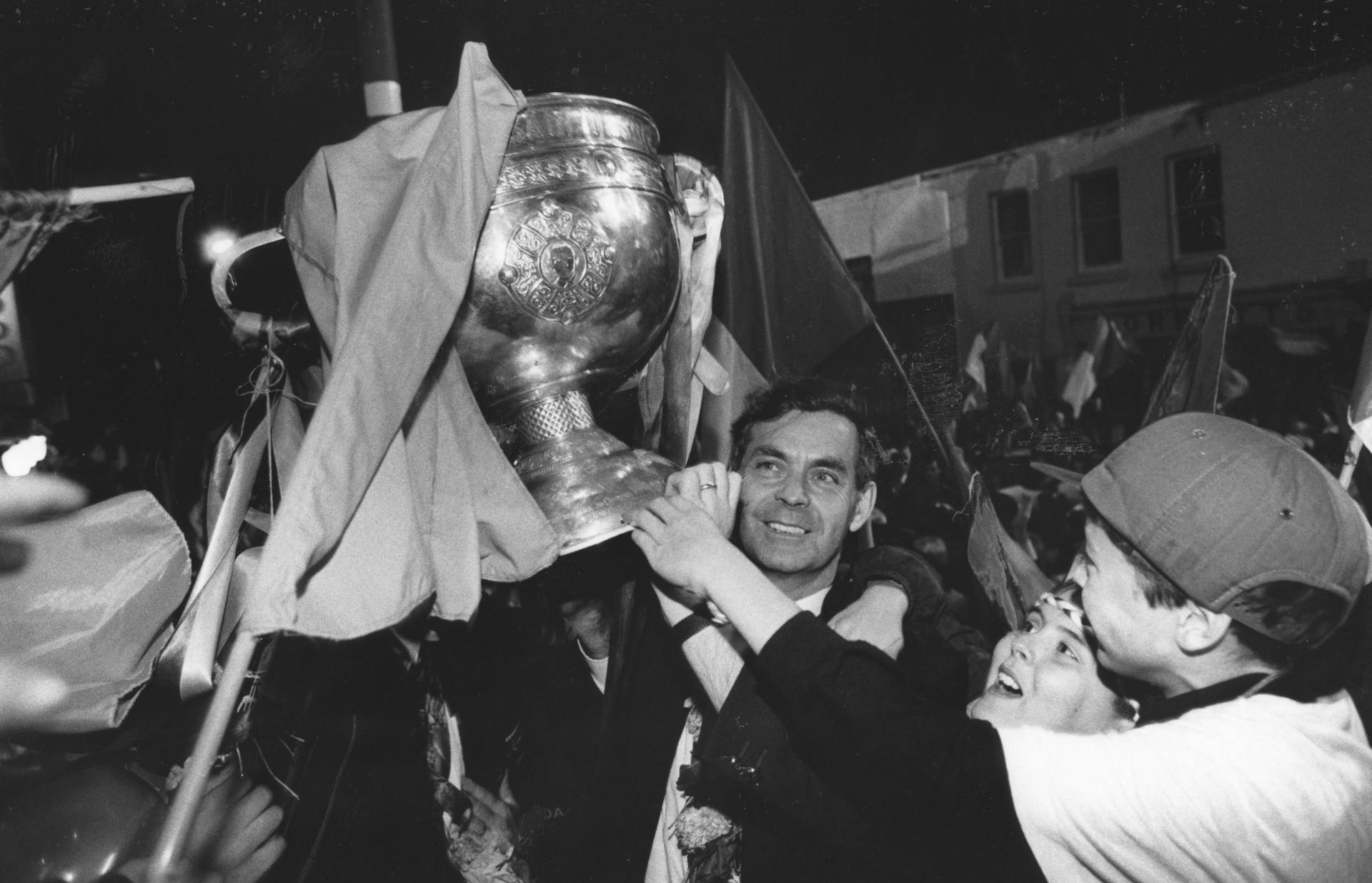 Manager Brian McEniff with the Sam Maguire during the homecoming celebrations in 1992 PICTURE: ©INPHO/Billy Stickland

But I got back to Bundoran and after a visit to the doctor’s, I had to get to bed. My wife Cautie locked our walk-in wardrobe so that all I had was my pyjamas. To be honest though, I was going nowhere that day, I was just too unwell.
She brought me the papers and I had hundreds of letters or pieces of mail that had been sent to the house. I had plenty to keep me reading.
The next day, the Saturday, Martin Gavigan was getting married in Ballybofey and I knew I needed be there.
I managed to get to the reception, but the form was so bad, I had to leave after an hour. I knew it was going to be a great day, but I just wasn’t able for it.
I was still annoyed about missing out on our trip to Inishowen, and then the team finished off their tour of the county in Ballybofey. I’d have wanted to be there for that too, if only to pay tribute to PJ McGowan who had managed our U-21s to the All-Ireland.
I had met Tom Conaghan in Donegal Town, and I’d wanted to do the same for PJ who had also worked with our Vocational Schools teams.
In the end up, myself and Cautie headed for a few days to Cork to her folks.
The Ploughing Championships were on in Cork that week, and we went there on one of the days.
We also went greyhound racing and I met Jimmy Barry Murphy there. I was with him on an All Star trip in 1974. He was a lovely man, and they made a presentation to me on the track that night. It was a lovely touch.
It was an incredible time and even after all these years, the memories of the celebrations are still so vivid. That victory in 1992 was very special, not just to us as a squad, but to the entire county.

I want to say a big well done and congratulations to Fr. Seán Ó Gallchóir and Fergus Mac Aoidh on their GAA President’s Awards which were announced last weekend.
They are two men who are fully deserving of this wonderful recognition.
Fr Seán in particular, has given his life to GAA in Donegal. A quiet, unassuming person, his contribution to our games has been quite amazing.
It was pleasing too, to see three people from Donegal selected on to very important committees at national level.
Well done to Martin McHugh, Sean Dunnion and Julie Galbraith on their appointments. I know they will do an excellent job.
On a sad, I wish to pay sympathy to the Kelly family in Donegal Town. I was so sorry to hear about the passing of Mick.
His funeral took place yesterday and in normal times, large numbers of people would have been gathered to say goodbye to a lovely man who was so well known and extremely popular all over the county.