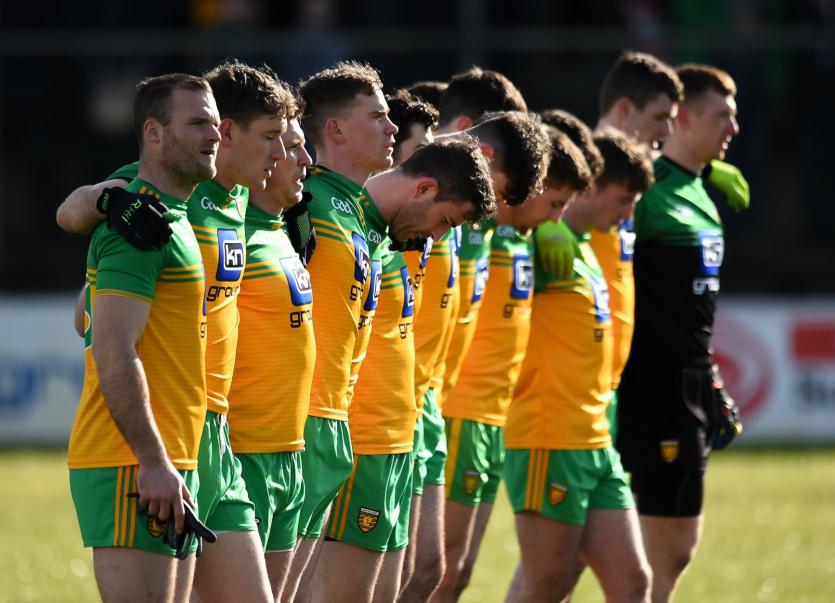 Former All-Ireland winning manager Brian McEniff has said the GAA should forget about running the Allianz National Football League this year, and instead go with just the All-Ireland championship later in 2021.
The former Donegal boss insists the focus should be placed on club football this year so that more players can be afforded the chance to play competitively in this disrupted season.
He wants the GAA to consider starting the season with club fixtures if, as is hoped, restrictions are eased to allow a return to play after Easter.

MAIN PIC: The Donegal team stand for the national anthem before the Allianz Football League Division 1 Round 5 match between Donegal and Monaghan at Fr. Tierney Park in Ballyshannon in March of last year. Covid-19 restrictions saw the league's fixtures programme halted after that game Photo by Oliver McVeigh/Sportsfile

He said the All-Ireland Championship at inter-county level could then be run later in the year.
“They are talking about starting off with the National Leagues, but I think at this stage, they should reconsider,” McEniff said.
“I don’t think there is much point this season, and when you take into consideration the fact that there will be no supporters allowed into games, it’ll be a disaster.
“They should just leave the inter-county season to later in the year. They can go with an All-Ireland championship like they did last year, but perhaps play it on a league basis to begin with.
“They can do the same for U-20 and minors. For now, I think it’s much more important to get the club season up and running.”
McEniff said clubs all over Donegal are itching to get back playing, and while a return to action at adult level would be most welcome, it’s even more important to look after the players at underage level.
“For obvious reasons, it’s imperative that our young players are afforded the chance to play as soon as it’s possible,” he said.
“Hopefully they will be allowed back to train again after Easter. If things go well then, who knows, we could start our new season within a few weeks.

Andrew McClean of Donegal in action against Sean O'Shea of Kerry during the Allianz Football League Division 1 Round 7 match between Kerry and Donegal at Austin Stack Park in Tralee, Kerry last October. Photo by Matt Browne/Sportsfile

“We need to be careful and the health and well-being of everyone involved remains paramount.
“In the North, they are going to allow a return to play from April 12, and I think we should be looking to do the same here.”
There is a broad support at national level for plans to start the National League in early May if, as has been predicted, inter-county teams are allowed to begin training after Easter.
But that all depends on the government agreeing to ease the current Level 5 restrictions.
It’s expected that the government will indicate what their plans are for outdoor activities from April 5 in the coming days.