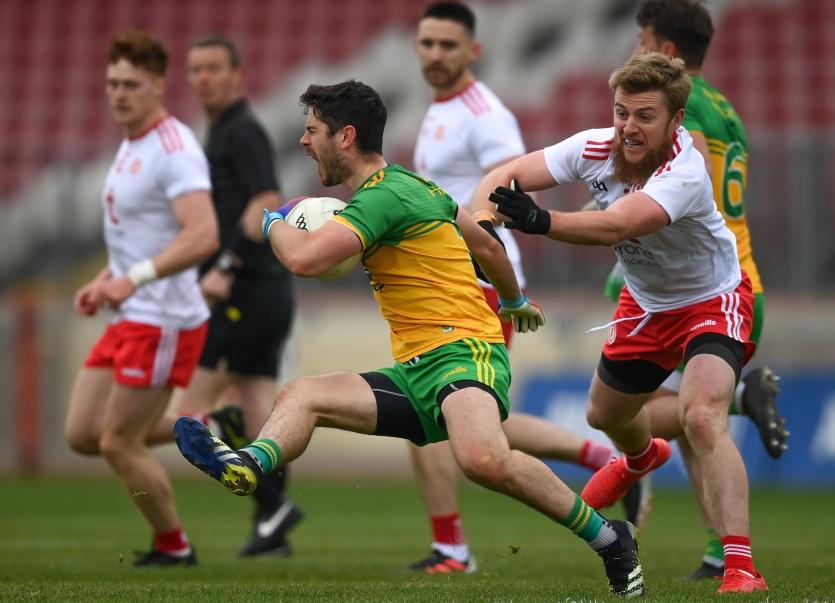 Disappointed Tyrone team captain Paudie Hampsey rued the sending off, of team-mate Michael O’Neill, as his side were well beaten by Donegal everywhere except on the scoreboard.
Hampsey, who was making his debut as Tyrone senior captain, who normally tangles with Michael Murphy did not get a chance as the ageless Donegal general played a much deeper role and was hugely effective.
“It was definitely not the start we wanted (to the second half) but the lads were chasing the game there with a man down, but the lads put in a good shift.
“That was pretty tough, and we are only on the road a few weeks, so it was tough with the man being down and Donegal took full advantage of that.
“Going in at the break at 0-10 each we were happy enough with a draw playing into the breeze.”
But Tyrone could only manage two points in the first 30 minutes of the second half and seemed to lose their way when O’Neill was lined by referee Joe McQuillan early in the that period.
Donegal keeper Shaun Patton made full use of the extra space and Donegal were able to build a strong attacking platform.
And but for the individual brilliance of debutant Paul Donaghy, Donegal would have won by a lot more.
“Donegal are a very experienced team and have been on the road for a while and they know how to punish you.
“The lads put in a good effort with the man down and we kept battling to the end, which was encouraging.”
He added: “It was a long break, and we are only back together collectively for the past few weeks.
“It’s a marathon and not a sprint and we will look to the next game against Armagh in the Athletic Grounds.”
When asked if he was concerned about Tyrone’s 12 wides, he said it was not a worry.
“I would not say it is a concern as we have a few new forwards in there and we have full belief in them and we know that on another day they would be going over the bar.
“We know that those lads on their day can put the ball over the bar.
“The success rate was not good and maybe that is something we can work on.”
And he was full of praise for championship debutant Paul Donaghy who finished with 0-10 and was vying with Michael Murphy for Man of the Match.
“Paul has been outstanding in the club championship and now he is bringing it to the county which is very encouraging.
“Donegal really capitalised on the extra man, and they had a few big men around the middle of the field and Shaun Patton made great use of their kick outs.
“It is hard to go man to man, but the lads really battled well and there was only two points in it in the end.”