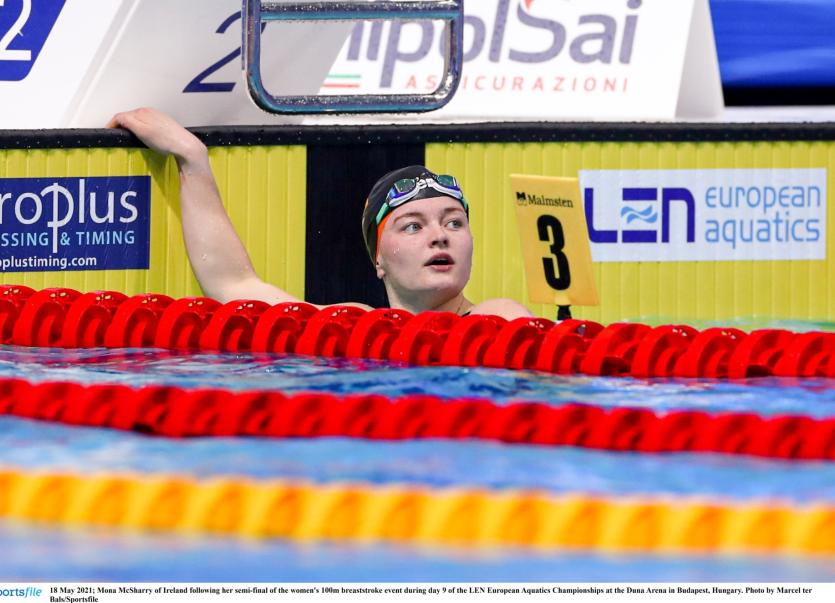 This comes just weeks after the Grange, Co Sligo native secured her place at the Tokyo Olympics in the Ireland qualifiers.
The 20-year-old former Colaiste Cholmcille, Ballyshannon student, clocked 1:06.97 in the morning heats, qualifying for the next round in joint 10th position. She bettered that performance in the Semi-Final, touching the wall in 1:06.42 to go sixth quickest and book her spot in Wednesday night’s Final.
McSharry has now swum under 1:07 in her 100m Breaststroke four times in the last four weeks, setting the Irish Senior Record of 1:06.29 at Irish National Team Trials in April, where she first achieved the Olympic Consideration Time for Tokyo 2021.
Speaking after her semi-final, McSharry said: “I feel great! If you had told me I would swim 1:06 this year, I’d have been over the moon, and now I’ve just done two 1:06 swims in a few hours and, I don’t want to say easily, but comfortable enough that I know I could do it again.
“It just gives me so much confidence in the build-up to the Olympics.”
McSharry already has a 2019 European Short Course Championships Bronze Medal in the 50m Breaststroke, but due to the pandemic has been unable to compete for Ireland on the international stage again until this week.
Speaking about what it’s like to be back, McSharry added: “It’s an indescribable feeling. Racing NCAAs in the US, I got a little bit of that feeling of racing on the big stage, but Europeans is different again and I think you forget just how good it is to be racing here.”