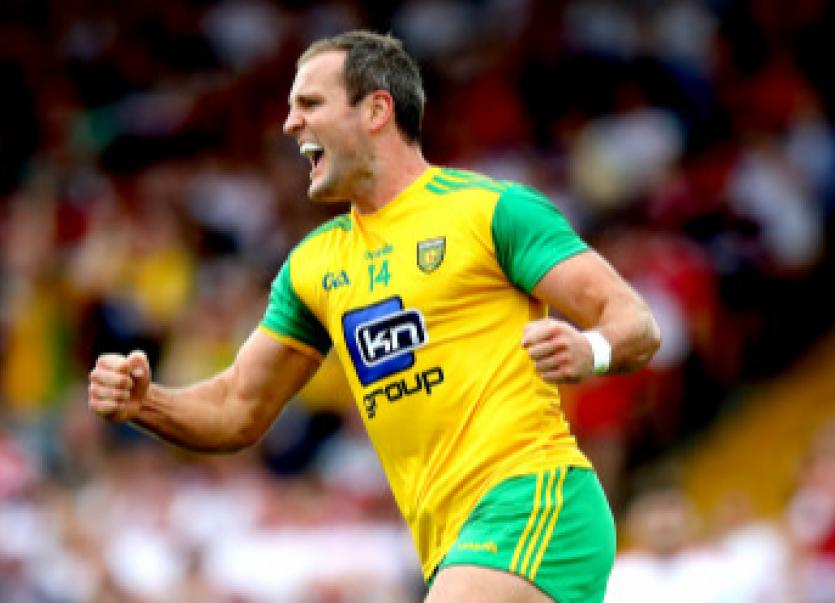 Donegal can count themselves extremely lucky to have got a share of the spoils against a lively Monaghan side in MacCumhaill Park, Ballybofey.

They needed Patrick McBrearty to be at his best in the second half and the Kilcar man took a ‘mark’ to hit the equaliser with the clock ticking.
Monaghan were totally dominant in the opening half creating seven goal scoring chances, but took only three. Conor McCarthy was their ace in the pack, hitting a hat-trick of goals in 11 minutes.
They led 3-7 to 1-8 and when they added a fourth goal from Conor McManus early in the second half they seemed to be on their way.
But Donegal, despite losing captain Michael Murphy after just four minutes, chipped away and got a draw.
Any day you score 1-20 you would expect to win but in this game Donegal were extremely fortunate to take a share of the spoils.
Overall, it was a fantastic game of attacking football and both sides will learn a lot from the game ahead of the championship. Apart from Murphy, Donegal lost both corner-backs Eoghan Bán Gallagher and Brendan McCole to injury in the closing minutes.
The Donegal unbeaten record in MacCumhaill Park going back to March 2010 looked under threat throughout with Monaghan leading by nine points at one stage in the first half and by seven after McManus’s goal on 46 minutes.
That they were able to get back to level matters showed great spirit but Monaghan were not nearly as sharp in the second period, missing some great opportunities to close out the game.

WHIRLWIND START
There was a whirlwind start to the game with six points in six minutes, shared equally. Donegal went 3-1 up but Monaghan's pace up front was already evident. Michael Langan had opened the scoring after 24 seconds with Conor McCarthy replying 30 seconds later. The action was fast and furious. Eoghan Bán Gallagher cut through and opted to fist a point with a goal chance on while Conor Boyle had an effort come back off the post at the other end.
Peadar Mogan made it 3-1 before Aaron Mulligan and Micheal Bannigan had Monaghan level.
By the water break Monaghan were in control, firing home two goals, both from corner forward Conor McCarthy.
The first came on 10 minutes when he found space in behind the defence and dummied twice to leave a tap in while he was on the end of a good Karl O'Connell run on 17 minutes to fire home the second and leave the Farney men ahead by 2-4 to 0-4. The second goal came despite Monaghan being down to 14 with Conor Boyle picking up a black card on 12 minutes.
It would get worse for Donegal just after the break when McCarthy broke the Donegal line once more to complete his hat-trick, despite being surrounded by three Donegal defenders.
Oisin Gallen had a Donegal point and Michael Langan breathed some life back into the home side with a fantastic finish after cutting through the Monaghan defence.
But it was Monaghan who were still looking the most dangerous and by half-time they were 3-7 to 1-8 ahead, this despite losing full-back Conor Boyle to a second black card on the half hour mark.
Patrick McBrearty hit a couple of frees for Donegal but Aaron Mulligan, Micheal Bannigan and Karl O'Connell added the Monaghan points before the break.
Conor McManus came in for Monaghan at half-time but Donegal again started well with points from Caolan McGonagle and Oisin Gallen to one from Andrew Walsh for Monaghan.
Eoin McHugh cut the lead to three before Monaghan struck for their fourth goal, Stephen O'Hanlon making the opening and Conor McManus applied the finish.
Donegal did hit three in-a-row to cut the lead to 4-9 to 1-14 by the second half water break, but they had lost Dáire Ó Baoill to a second yellow card by that stage.
Patrick McBrearty cut the lead to two but it should have been all square as McBrearty blazed over. But just prior to that, Monaghan had the chance to close out the game when substitute Niall Kearns was through and tried to chip Shaun Patton but saw his effort come back off the crossbar.
Conor McManus and Aaron Mulligan added frees while Niall O'Donnell left a goal in it with five minutes of normal time left.
And Donegal would dominate the final minutes and thanks to points from Ciaran Thompson and two from Patrick McBrearty, they snatched a draw from the jaws of defeat.
Monaghan will rue two great point scoring chances in those closing minutes, Conor McManus and man of the match Conor McCarthy off target.