REPORT: Donegal come good in the second half against Westmeath 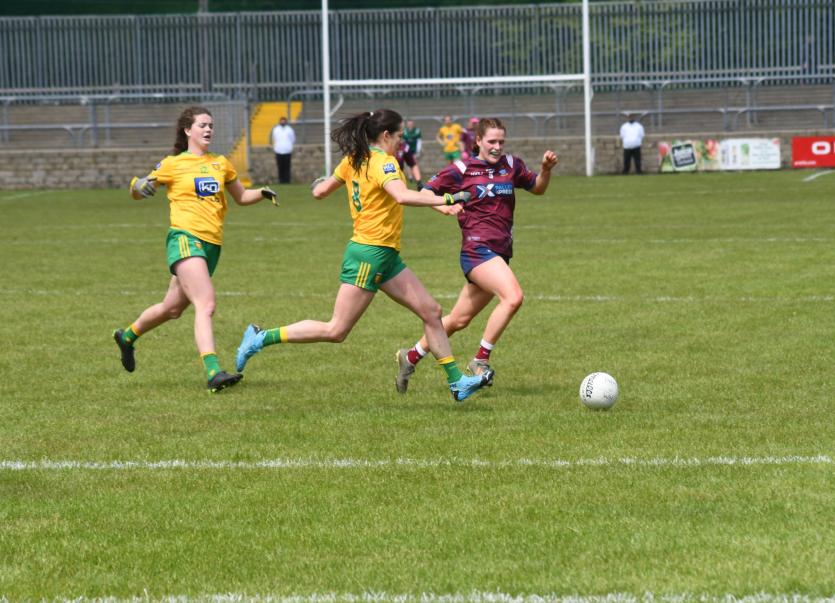 Action from Sunday's game in Ballybofey where Donegal got the better of Westmeath to open their league campaign with a win PICTURE: Ann McMenamin

Donegal got their Lidl Ladies League campaign off to a good start with a comprehensive win over Westmeath in Sean MacCumhaill Park on Sunday.

Nine points separated the sides at the finish after Donegal produced a strong second half performance. Team captain Niamh McLaughlin  capped a fine individual performance with her side's second goal in the closing seconds of the game.

The Moville player also hit the game’s opening goal in the early seconds of the tie.

With a mere 17 seconds on the clock the team captain threaded the ball through while trying to find full forward Geraldine McLaughlin.

However, with the Donegal forward double-marked by Jennifer Rogers and keeper Sinead Byrne, the ball somehow skidded past the advancing trio and ended up in the back of the net.

Donegal failed to build on the three pointer and Maxi Curran’s side went 12 minutes before they found the target again, this time from a 20 metre Geraldine McLaughlin free.

In between, Fiona Claffery and Sarah Dillon had got the Midlanders up and running with two fine points. The visiting defence wasn’t giving an inch while Anna Jones and Sarah Dillion struck again to cut the Donegal lead to a single point.

The visitors tied up the game at 1-2 to 0-5 late in the half before Niamh McLaughlin and Karen Guthrie gave the locals a three point half-time cushion.

While Jones, with the first point of the second half, reduced the margin again, Donegal rose to the challenge.

Katy Herron took over in the middle of the park and with captain McLaughlin making darting runs, Donegal posted four points to Westmeath’s one by the second water-break.

That was six minutes into the new half and Dillon's point was the Midlanders' last score until Leona Archibold converted from the penalty spot deep into injury time.

Donegal really dominated the final quarter and thanks to points from Guthrie and sub Suzanne White, they put themselves into a commanding position. Their second goal on the hour added the icing on a top class second-half performance.