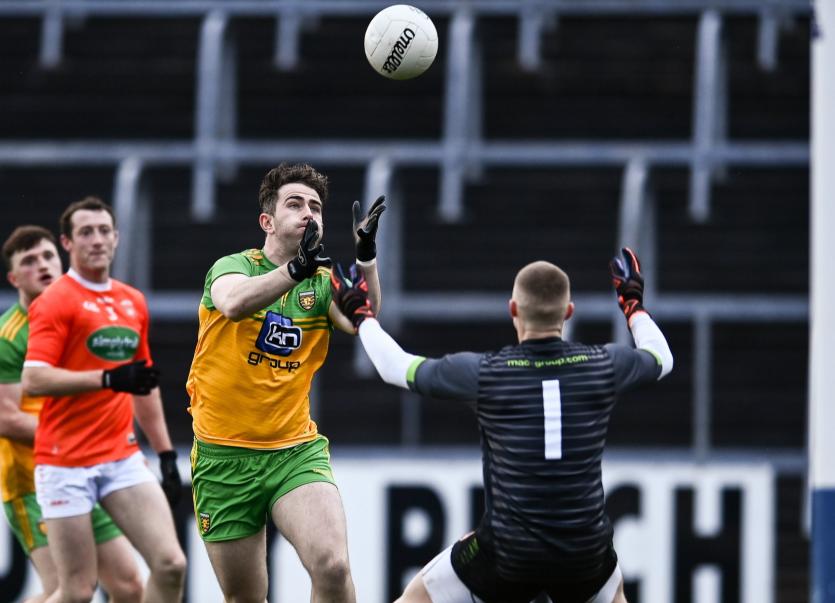 Patrick McBrearty punching a point against Armagh when they last met Picture: Sportsfile

Saturday's Allianz National League game in Armagh presents Donegal with a dilemma as to what they want from this season according to former All-Ireland winner Manus Boyle.
The Killybegs man played 15 seasons for Donegal but there were no lockdowns or short league seasons like we have experienced over the past 15 months.
And he wonders is there a need to assess the situation after just two games.
"The way the fixtures are this year, do you have to win every game? Is it really an advantage to go into the top two in our group? You have to ask yourself what is the best preparation for the championship?"
Boyle feels that when you look at the Donegal situation closely, they will have one more game after Saturday evening (a league semi-final or a relegation play-off) and then two weeks later it will be four games on top of each other in the Ulster championship.
As for how Division One North will pan out, Boyle feels that Monaghan will struggle to get anything against Tyrone in Healy Park on Saturday night because of their bad start.
"Tyrone will improve and I would have to be impressed by Armagh against Monaghan and against Tyrone. They have a lot of young boys coming through and they will be keen."
But Boyle keeps coming back to what Donegal want from Saturday's game.
"Do we want five points and then play either Dublin or Kerry in the semi-final.
"Why put everything into the Armagh game. With players injured, do you give others game time so you know where those players are at, if required.
"It is a difficulty for Declan (Bonner). I know he will under pressure if he doesn't put out a strong team. He is damned if he does and damned if he doesn't.
"But because of the quick turnaround, you have to make decisions. The championship has to be the main focus.
"If we were starting off with Down in Ballybofey, it would be of some comfort. But the game is in Newry and whether you are playing a good Down team or a bad Down team, going to Newry it's 50-50. Decisions generally will go 60-40 or 55-45.
"Will the game come too quick for (Michael) Murphy. It's a tricky week for all concerned," he says.
"The Donegal team has been built around Murphy, especially the role he has taken over the last few years. It's not everybody can play that role; not everybody has the experience and he reads the game so well.
"It's not just his scoring, but in the role he plays, he allows the likes of Eoghan Bán (Gallagher), Ryan (McHugh) and (Peadar) Mogan to make the runs, because he fills the gaps.
"There is an aura around Murphy and Donegal and it will be interesting to see how teams view it when Murphy is not in the team."
But Boyle feels there is a solution to Murphy's absence and one he would like to see employed.
"Having Odhrán Mac Niallais back is a big plus. He is a player who could play that role, maybe in a different way to Murphy. He has the smarts, the brains to play that role. Where is he at the fitness levels? Saturday would be a good opportunity to see how this works.
"I think Bonner is a big fan of MacNiallais, as we all are. He is one of those players like Murphy, McBrearty that comes along now and again, and you have to make the best of it. When he gets his fitness back, he will be a massive asset."

CHANGE 'KEEPER
The Killybegs man also feels that Saturday may be an opportunity to give our back-up 'keeper a chance to get game time.
"It is an opportunity to play our second 'keeper. We are all aware now where Shaun Patton is. But if gets one injury, do you throw your second 'keeper in at the deep end?
"Are we good enough to win Ulster playing the same team week after week. You have to plan for the Down game but in the back of the mind, you will have Derry and hopefully two other games," says Boyle, who feels that with so many games in-a-row getting as many players up to speed and tested is vital.
He also feels that Donegal are playing a completely different game nowadays to what they played 10 years ago. "We certainly want Neil McGee, Michael Murphy and Ryan McHugh to play. We are placing a lot of pressure on the likes of Hugh McFadden, because those players give the rest the freedom to play.
"You could describe it as the complete opposite to what we were used to 10 years ago.
"With so many of our defenders attack minded, you have to have a defensive strategy. We don't have many options in that defensive minded player so there is a lot of pressure on four or five.
"Shaun Patton is as vital as Patrick McBrearty or any of the rest of them. It is important to know what the back-up is. You can have training but it's not the same when you play championship or national league.
"Saturday evening is our last chance to experiment. Supporters say go out and win every game, every player will think that way. But do you risk every player doing that?
"I would use Saturday's game to see where we are at. If we get to the semi-final then that's good. But we have to put trust in the rest of the panel, to make them feel part and parcel.
"Armagh gives us the opportunity to do that. They will not be easy. They seem to have got a lift with Kieran Donaghy involved and the swagger he brings. I think they will test plenty of teams, especially with two O'Neill lads."