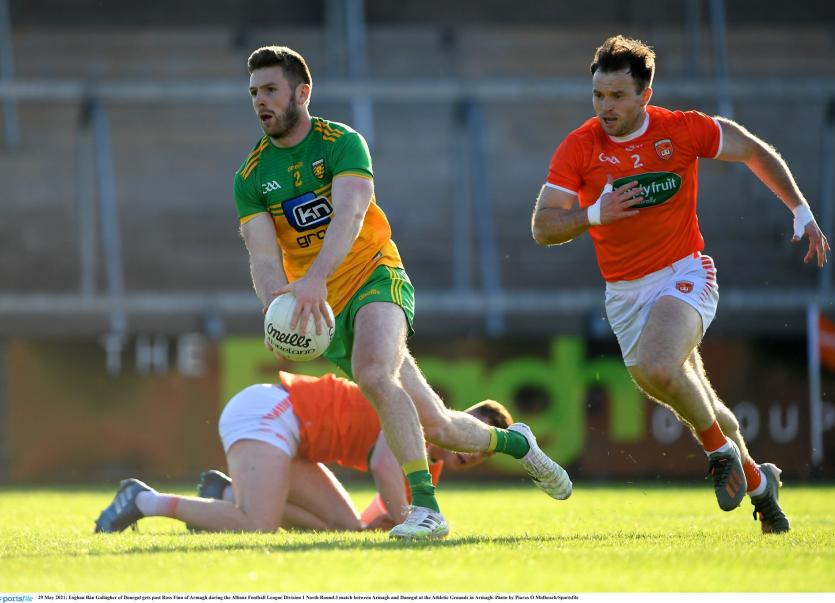 Eoghan Ban Gallagher on the break for Donegal against Armagh Picture: Sportsfile

Donegal are through to the National League semi-final after a hard-earned draw against Armagh.

It took a very spirited second half comeback to get Declan Bonner's boys a draw but they closed out the game in great style.
For the first time in the league we had spectators present and they were able to enjoy a sun-soaked Athletic Grounds in Armagh.
Despite being named in the team in a press release at lunchtime, Jamie Brennan was not even togged for the game. Eoghan McGettigan of Naomh Conaill was in for his first start in the league. His last appearance in a Donegal jersey was as a late substitute in the Super 8s game v Mayo in 2019 in Castlebar.
Armagh had the opening score after just 50 seconds, a free awarded off the ball and moved on to make it very easy for Rory Grugan.
Patrick McBrearty got Donegal's only score before the first half water break, after a great run, firing his shot just over.
But Armaghy were much more clinical and Stefan Campbell would add three points while Rory Grugan fisted over after a high ball caused problems in the Donegal defence.
Rory Grugan increased the Armagh lead from a free after the water break but then Donegal got some return with points from Ryan McHugh, Michael Langan and a Niall O'Donnell free.
Oisin O'Neill and Grugan from another free that was moved on for dissent put Armagh 0-8 to 0-4 ahead.
Hugh McFadden combined with Patrick McBrearty, who was hauled down and the Kilcar man, who looked lively, pointed the free. He added another four minutes later to cut the lead to two, but Armagh finished out the half well with Rian O'Neill pointing a free and Oisin O'Neill hitting the point of the half from full 55m with the last kick of the half.
Donegal were four points down but could have been closer but for four wides and three shots that dropped into the 'keeper's hands. They had a couple of goal chances with Eoghan Bán Gallagher having the best opportunity when he broke the Armagh line on eight minutes but blazed his effort wide.
Ciaran O'Hanlon had Armagh 0-11 to 0-6 ahead after just 42 seconds but despite hitting two sides, Michael Langan did it again, drove through the Armagh defence to fire to the net.
Ross McQuillan replied for Armagh and Oisin O'Neill added another while Conor O'Donnell with his first inolvement fired over for Donegal.
Tiernan Kelly pointed for Armagh but two Patrick McBrearty points had Donegal back within two at the second half water break - 0-14 to 1-9.
Stefan Campbell and McBrearty traded points within a minute and Conor O'Donnell landed a great point to leave just one it on 54 minutes.
Armagh took a significant step forward when Tiernan Kelly fired home a goal on 56 minutes. But Kelly was lucky to stay on the field when he hit Eoin McHugh head high on the next attack.
Caolan Ward, in for Eoin McHugh, fisted a point but Jemar Hall cancelled that score at the other end.
With six minutes of normal time left Patrick McBrearty hit his seventh and eighth of the day to leave two in it, 1-16 to 1-14.
Ciaran Thompson cut the lead to one in a great finish as six minutes of added time were called over the public address.
Niall O'Donnell fired over to level matters and they held on to get the result they needed.