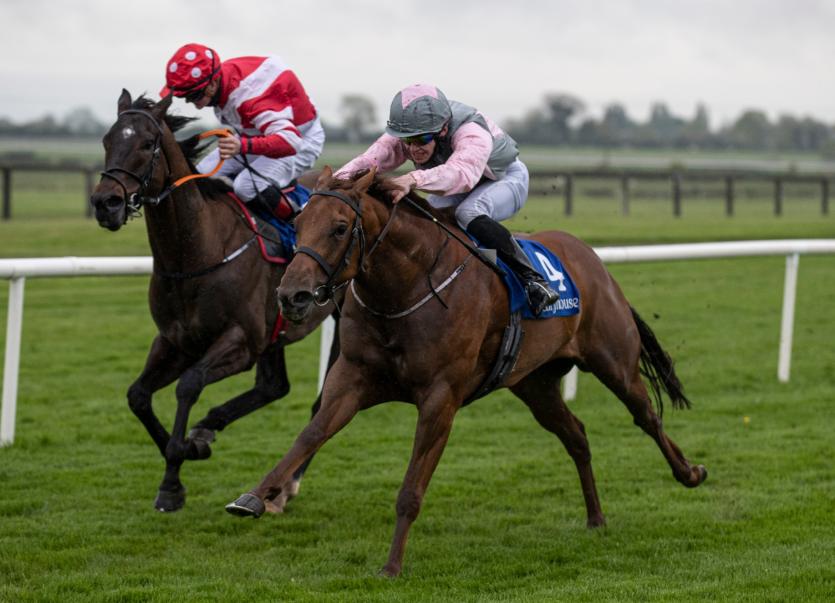 Queens Carriage (right) was the first of two winners for Kevin Coleman and Luke McAteer at Fairyhouse on Friday. Photo: Patrick McCann/Racing Post

It was a big week for Conor Orr and he shared a winner at Ballinrobe on Tuesday with Mullingar trainer Ciaran Murphy as Coastal World took the two-mile six-furlong maiden hurdle at odds of 17/2.
Owned by the Railway View Stud Partnership, the six-year-old led before the final flight and raced to a three-length success over the Anthony McCann-trained Simply Shabra.
Dot Love represented the winning trainer and she said, “I’m very happy and the ground suited him. Conor said he had a nice run the last time and that he just got tired. He put it all in today, he got a little bit lazy in front but he won and I’m delighted for the owners.”
Orr notched up a hugely significant success when winning the beginners’ chase at Punchestown on Sunday. It was his 60th career success and he rode out his claim on the impressive Lorna fowler-trained Politesse on which he made all the running to win by 11 lengths from Henry de Bromhead’s Premium Package at odds of 9/4 favourite.
Luke McAteer rode the fourth double of his career and his second at Fairyhouse on Friday afternoon. He shared both winners with County Tipperary trainer Kevin Coleman and the pair were first off the mark with in the six-furlong conditions’ race at Fairyhouse on Friday with the smart Queens Carriage, but it was tight.
The 11/10 chance just did enough to hold the challenge of the Matthew Smith-trained 4/5 favourite Master Matt by a short head to record her third win in a row. “She can only do what she has done and it was competitive for what was in it. The second horse today is a good yardstick. Luke said she handled the ground, but sure when do jockeys ever say they don't handle it when they win! She's up to getting a bit of black-type if we can place her right. She should come on from that,” said the winning trainer.
The pair were back in the winners’ enclosure a little over an hour later as the gambled-on Aurora Eclipse took the opening division of the six-furlong handicap. Backed from 22/1 to 8/1, the six-year-old got on top inside the final furlong and beat John McConnell’s It’s All A Joke by a head. McAteer’s brace doubled his tally for the season to four winners.
Oisin Orr was also a weekend winner and his success came at Navan on Sunday. He completed a double for County Cork trainer John Murphy on Venice Biennale which raced to a four and a quarter-length win in the 10-furlong maiden at odds of 15/2. Just a week on from her Curragh debut, the three-year-old easily beat the Gavin Cromwell-trained White Pepper. Murphy had earlier scored with the Robbie Colgan-ridden Charterhouse.