Donegal learned from the Breffni blues back in '92 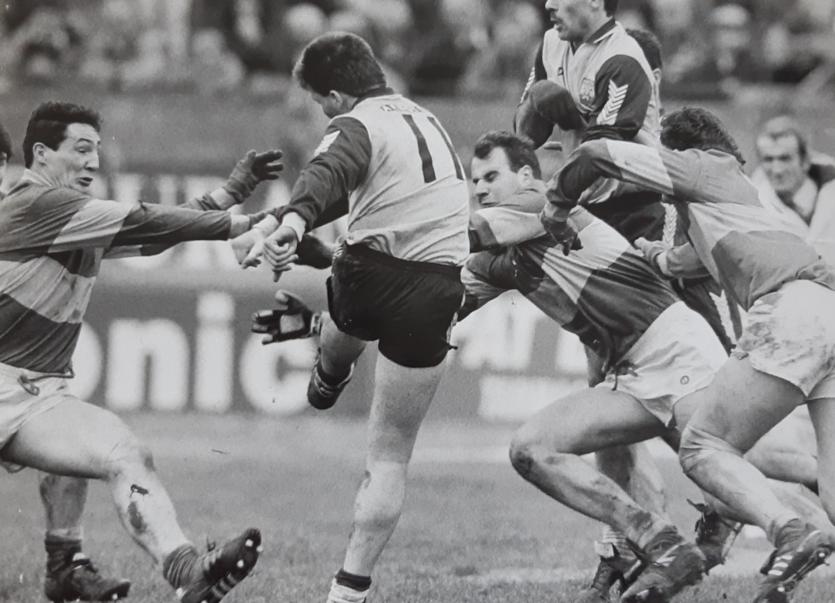 Dessie Farrell, the current Dublin manager, is about to be blocked by a combination of Donal Reid, Padraig Brogan and Anthony Molloy in Breffni Park in 1992 (Pic: Michael O'Donnell)

Donegal were caught by an unexpected sucker-punch in the 1992 NFL quarter-final against Dublin at Breffni Park, but it would serve them in good stead

With just a couple of minutes remaining of the 1992 National Football League quarter-final at Breffni Park, pockets of the Donegal support trundled towards the exit and up the hill for home, wondering what their semi-final might bring.

On a drearily grey Palm Sunday, Brian McEniff’s team looked assured, leading by six points midway through the second half and then 1-10 to 1-6 late on, having dominated all but a fraction of the contest.

In desperation, Paddy Cullen, the Dublin manager, opted for the tactic that was an off-the-shelf concoction of kitchen-sinking and Hail-Marying. Cullen threw on Paul Clarke and instructed another substitute, Vinnie Murphy, a starter in just one of their previous seven league outings, to go into the edge of the square, where Donegal had a bit of a reputation of trying to squeeze square pegs into a round hole.

Despite conceding the first three points inside of six minutes, Donegal had earlier found their feet to move 1-6 to 0-3 in front towards the end of the first half, with Joyce McMullin scoring a blistering 12th minute goal on the run after Tony Boyle had broken a raker from Martin Gavigan into his path. “We played well in stages,” says McMullin.

Dublin clawed their arrears back to three at the break, 1-6 to 1-3, with Charlie Redmond picking up the pieces to slam a loose ball home for a goal in first half injury time. Donegal steadied in the second period, winning the majority of their individual battles, to lead 1-10 to 1-4 on 42 minutes with Mark McShane scoring what would turn out to be their last score of the day.

Jack Sheedy and Dessie Farrell pointed and the Dublin deficit would remain at four points until the final 90 seconds, when the two substitutes struck a goal apiece to turn things on their head and dump Donegal out.

Firstly, Murphy outfielded Paul Carr to set up Clarke to fire past Gary Walsh before Carr was unfortunate in an attempted block that took the fizz out of a Farrell effort at a levelling point and it fell into the gracious arms of Murphy to shoot a goal that would prove to be the winner. Final score: Donegal 1-10 Dublin 3-6.

FAT LADY
“It’s never over till the Fat Lady sings,” Redmond reminded Noel Hegarty, who remained tight-lipped in regards to a response, only investing the jibe in the memory bank.

“It was a bitter pill for the Donegal supporters to swallow as they saw their side completely outplay the Dubs only to throw it away in the final minutes,” wrote Peter Campbell in The Donegal Democrat. “Dublin could hardly believe their good fortune as they turned the four-point deficit into a two-point victory. They readily admitted they had got away with grand larceny.” McEniff called an impromptu session for the following day, where the rain would fall in sheets, at the Holmses, the home of Donegal Town Rugby Club. It was a decision that wasn’t greeted with approval at the time, but would reap its rewards in time.

“Brian Murray, who was in Dublin, and Gary Walsh in Burren were not enamoured,” McEniff recalls. “It was a bad night and we made a promise that we would never again get caught with late goals.”

“We chewed on it that next day," McMullin adds. “There was a long discussion of what went wrong and why it went wrong but when the dust cleared we took the positives from it. We could match the top teams.”

The takeaways of the result were two-fold and the further into summer and onto early autumn things went, the more noticeable those contrasting facets became.

Despite the capitulation, McEniff saw enough in Cavan to convince his players farther down the track they had the measure of Dublin, while their opponents developed an instinct that no matter how poorly they performed on a given day, they were capable of beating a team like Donegal.

“Talking to a few of the lads about that game, if Donegal had won that game, we might have been in a better frame of mind for the All-Ireland,” Murphy, who would light up Croke Park tormenting defences, told Keith Duggan of The Irish Times in 2016.

A week after Breffni, in a Ballybay hail-shower, Monaghan sludged their way through the muck to a 2-10 to 1-9 Dr McKenna Cup win over Donegal, who had lost a host of regulars - McMullin, Sylvester Maguire, Padraig Brogan, Anthony Molloy and John Cunningham - to knocks playing domestic club fixtures the day before.

Burt’s Paul Callaghan kept goal and Mark Crossan of St Eunan’s and a 19-year-old from Naomh Conaill by the name of Jim McGuinness, who had impressed McEniff clad in his ‘John Motson coat’ at a Christmas trial at Fr Tierney Park in Ballyshannon, made their senior debuts.

Brogan, who had transferred to Bundoran from Knockmore and worked for McEniff in the leisure centre of The Great Northern, would never play for Donegal again after Breffni, with Murray the one to ultimately benefit.

“We stopped for a drink on the way home from the Monaghan match,” Martin McHugh said in Damian Dowds’ and Donal Campbell’s Sam’s for the Hills. “Being beaten by Monaghan was the lowest we ever went.”

The only way was up. By then, Donegal, who were six weeks out from a return to Breffni Park to take on Cavan in the Ulster SFC quarter-final, were far from the finished article. Some still possessed some romantic notions, as words of the immortal Donegal Democrat columnist, Cormac McGill, perhaps better known as The Follower, show.

“In Donegal last week I encountered quite a few disillusioned supporters,” he wrote. “They were not in Breffni but were willing to hold an honours class as to why we lost. They can see no sense in winning an Ulster title if we cannot take Sam home in September. Beat Cavan and the Donegal bandwagon will roll again. I still have not booked my mid-August trip to Hautes-Pyrénées as I am afraid of losing my tiny deposit. I'll want that few pounds for Dublin on August 16th.”

He was right. Donegal won Ulster for the fifth time and on August 16th, McGill wasn’t in Les Hautes, didn’t lose his tiny deposit nor did he stay at home to watch Super Sunday on Sky Sports, which aired for the first time as a Teddy Sheringham goal saw Nottingham Forest overcome Liverpool.

He was in Croke Park as Donegal shook off Mayo, with Brogan a second half substitute for the Connacht champions and welcomed to the fray with a few meaty shoulders from his former teammates, 0-13 to 0-9, to reach a first ever All-Ireland final.

There, they would claim one of the great victories to win Sam Maguire for the first time, as McEniff’s rank outsiders defeated Dublin 0-18 to 0-14, having learned the hard way in the wake of Breffni. In many ways, it was the perfect illustration of taking one step backward to take two forward.

“The defeat in Cavan, when you look back, did us no harm at all,” McMullin concludes. “It taught us a few invaluable lessons that served us in good stead from then on.”

The Fat Lady wouldn’t take the stage till that September. No Donegal supporter left early that day.