PREVIEW: Donegal need to use their bench to get full value of Saturday's league semi-final against Dublin 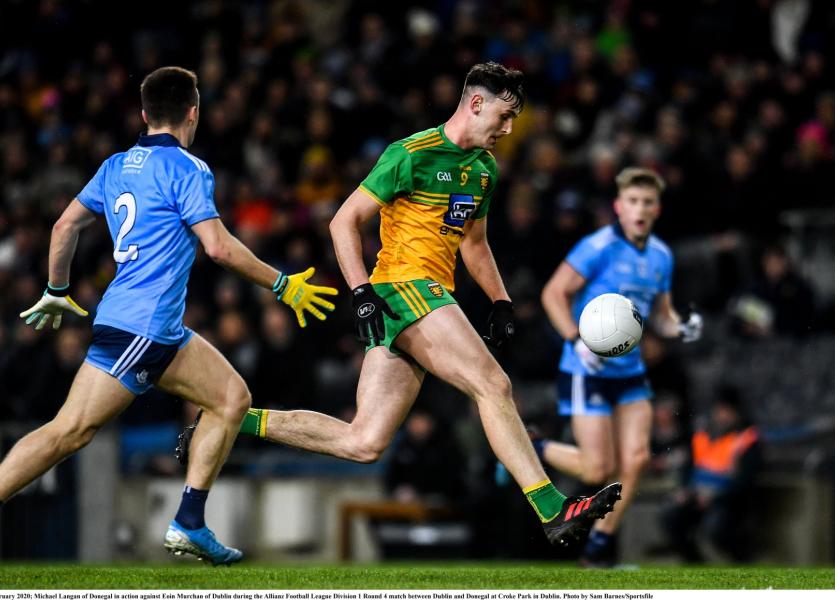 Michael Langan in action against Dublin last year in the league in Croke Park. Picture: Sportsfile

Donegal meet Dublin in the Allianz National Football League semi-final on Saturday next in Kingspan Breffni Park (7.15 pm).
In normal circumstances and in a normal year it would be a game that both sides would go flat out with a win giving them another big day out and the chance of silverware.
However, with Down on the horizon for Donegal in the Ulster championship preliminary round two weeks' later, it is likely that Declan Bonner's approach will be one of caution, especially around the area of injuries. The other big factor is that even if Donegal win there will be no league final played. That decision has already been made as the final is just one week before Donegal play in the championship.
On the other hand, Dublin have been doing quite a bit of experimentation during the three league game series. They have a big advantage over other counties with their enormous player base and they are using that to good effect, giving those players an opportunity and in the process putting it up to the established players.
Donegal started the league well with a big win over Tyrone in Omagh but they were hit by injuries ahead of the Monaghan and Armagh games, which saw Michael Murphy, Jamie Brennan, Oisin Gallen, Paddy McGrath and Neil McGee sitting in the stand in the Athletic Grounds. A number of other players like Jeaic Mac Ceallabhui and Andrew McClean are also on the injured list
Despite that they drew their second and third round games, coming from behind on both occasions.
Whether any of the above see action on Saturday night remains to be seen. It all depends on the medical team and if any have recovered. Jamie Brennan maybe as he has had a full three weeks of recovery.
As for the others, we don't really know at what stage they are at. Indeed, maybe others have picked up injuries at training.
But if we are to assume that the others are fit and ready, then it would be nice to see all of the players who have been included in the panels of 26 over the three opening games getting starting time on Saturday evening.
I'm thinking especially of Odhrán McFadden Ferry, Odhrán Mac Niallais, Jason McGee, Ethan O'Donnell, Caolan Ward, Eoghan McGettigan, Conor O'Donnell and Eunan Doherty.
Most of these have got some game time over the last few weeks, but Saturday represents a great opportunity to see where they at. Conor O'Donnell was introduced in the second half against Armagh and showed that he ready and willing. He must start.
We need Odhrán McFadden Ferry for our defensive strategy. We don't have that many out-and-out defenders and McFadden Ferry looks one of the most likely to be given a man-marking role.
Jason McGee and Odhrán Mac Niallais could fit in anywhere from midfield to half-forward.
It will depend on injuries but the likelihood is that Donegal will have a changed team on duty, maybe not as many changes as I'm mooting.
Dublin have been steady during the league without really impressing. However, it would almost seem that they are playing in second gear at times. Ciaran Kilkenny and Con O'Callaghan are still the dominant forces up front, while Brian Fenton has been given a more forward role.
Cormac Costello has been the scoring machine with Dean Rock returning for the final league game against Galway. Elsewhere, they have chopped and changed their goalkeeper and given chances to the likes of Sean McMahon, Tom Lahiff, Dara Mullin, Sean Bugler and Cian Murphy.
But just as they have done over the past six years, they have done enough without being brilliant, but that is the mark of champions.
It would have been nice to be meeting them in normal circumstances, but 2021 is not normal. Getting through the game without further injuries will be one of the main targets for Declan Bonner's side. Hopefully, those who play put their hand up for a place against Down.