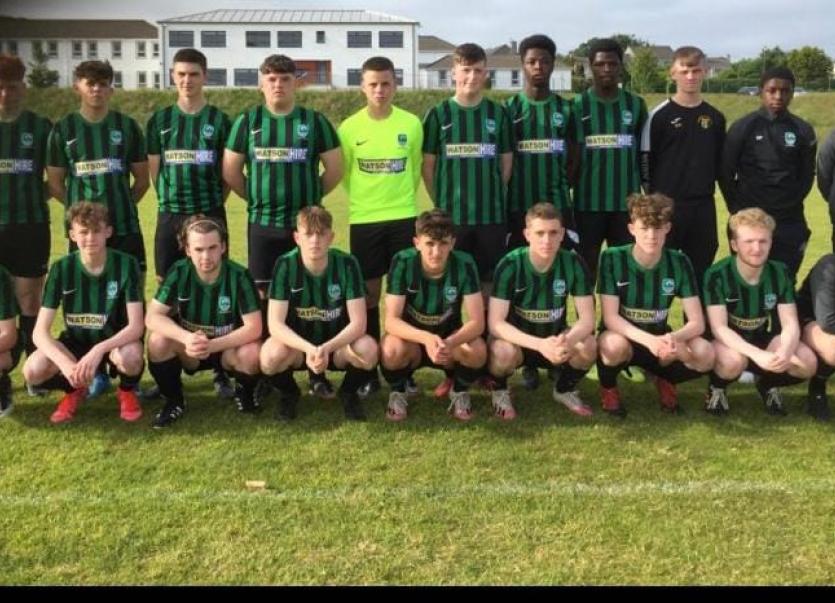 It was an action packed night with four matches played on the opening night of the Donegal Youth League.

It was the hosts though who left with all three points after a cool finish from Rory McGrenra on 70 minutes after an initial shot was well saved by Ballyraine netminder Andrew Nicholls.

On a perfect evening for football it was the hosts who made the perfect start as Sam McKnight put them a goal up inside the first minute.

Buoyed by this great start Drumkeen went on to dominate the first half hour of the game which was played largely in the Milford half .

All the pressure eventually paid off again as Sam McKnight added a second goal after 20 minutes.  Indeed young McKnight may feel he could have added another goal or two during this time.

On the rare occasion that they did manage to break out Milford were denied by Drumkeen Goalkeeper Luke McGee who made a great save to deny Matthew McBride.  After the water break Milford began to get a foothold in the game and the action became concentrated in the middle third of the pitch.

There were no further goals in the first half and the Milford resurgence continued into the second half. While they were having plenty of possession at that stage Milford weren't really creating any chances or unduly worrying Luke McGee and his defence.

Things then took a turn for the worse for Milford when they were reduced to ten men after 65 minutes. with the dismissal of Ben Campbell for a second yellow.

This handed the initiative back to Drumkeen.  Milford goalkeeper Johnny McCollum came on early in the second half and he was quickly in to the action to make a great save from Drumkeen's Jason Dunne.

McCollum made a good impression during his time on the pitch with a few other good saves to keep his team in the game. Milford probably Played some of their best football towards the end of the match . If they could have pulled a goal back it could have made for an interesting last few minutes but Drumkeen keeper Luke Mc Gee and his defence were playing well and were in no mood to give anything away.

Johnny McCollum,  Terry McBride, Liam McElwaine, Owen O Donnell, Shane Black and Matthew McBride all did well for Milford.
Luke McGee and his defence were excellent throughout for Drumkeen as were Cormac Martin and Niall Sweeney who worked non stop in Midfield and not forgetting Sam McKnight who worked hard and led the line well upfront and whose two goals ensured that his team got off to a winning start.

Despite the fact that there was a red card in this game it was by no means a dirty game and was generally played in a good sporting matter. The match was well handled by referee Liam Mc  Laughlin.

Bonagee Utd 2 Letterkenny Rovers 3
This was a typical derby battle full of hard work and endeavour and turned out to be titanic battle between two well matched sides.

There was very little clearcut chances in the opening quarter as the game got boiled down into an attritional encounter but it was Bonagee who broke the deadlock on the halfhour mark when Rovers were caught napping and Adam Murphy nipped in to fire past debutant Oran Craig in the Rovers goal.

That goal looked set to hand Bonagee an interval lead but crucially Rovers levelled right before the break when Nathan Plumbs header back towards goal was seized upon by James Gallagher before the  ball fell to Adam Yisau who converted from close range.

Rovers then went in front on 52 minutes when Jack Dwyer conberted from the spot after David Boakye upended Ethan Doherty in the area but Bonagee roared back and deservedly drew level on 59 minutes  with the goal of the game from Lorcan Harvey whose sweet strike looked goalbound from the moment it left his boot,

Bonagee then hit the top off the crossbar as they searched for a lead goal but that came the way of Letterkenny  on 76 minutes when Adam Yisau was lively to fire past Bonagee goalkeeper Matthew Gibson.

Bonagee poured forward in search of an equaliser and had a number of efforts with Craig being alert to deny Adam Carr and they did have the ball in the net in stoppage time from a corner but it was ruled out by referee Patrick Martin for handball despite some vociferous protests from the home contingent and it was Rovers who headed home with the three points and an opening day win.

Swilly Rovers 5 Lagan Harps 5
This game was reversed to Manorcunningham  due tot he ongoing pitch improvements at Swilly Park and it was a ten goal thriller with the spoils shared.

Goals from Swilly from Jay Curran with a hattrick and Michael Shiel with a brace while Lagan had five different goalscorers in Ciaran O'Connor, Jacob McDaid, Mark Bonner, Aaron Donnell and Conor Crossan..