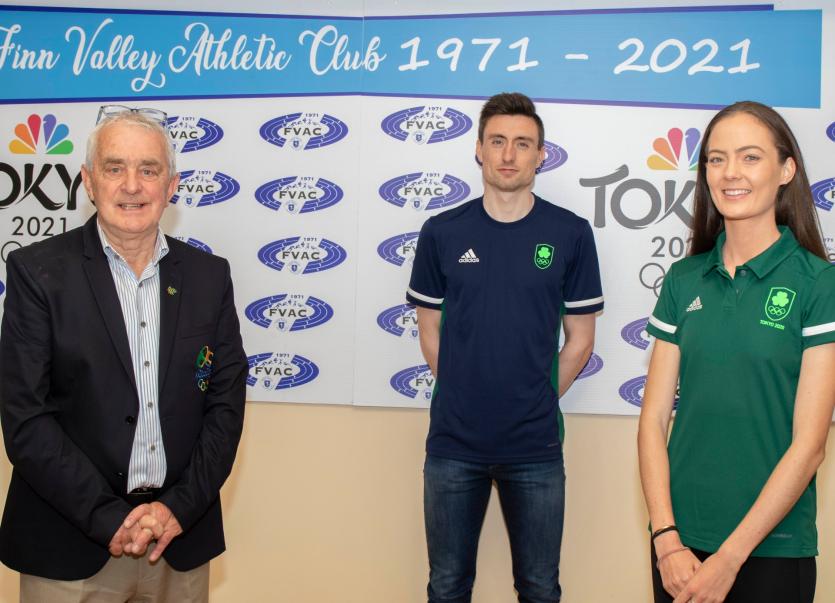 Patsy McGonagle was Irish athletics team manager for four Olympics and this week the Finn Valley Athletic Club he helped to form 50 years ago was seeing off their three competitors for Tokyo.

Brendan Boyce, Mark English and Eilish Flanagan are confirmed members of Team Ireland and are putting in their final preparations before flying east, with the opening ceremony taking place on Friday, July 23.

English, 28, made the Olympic 800m qualifying time and broke the Irish record in Spain last month, just hours to spare before the IOC's deadline.

He finished behind Yassine Hethat from Algeria, who ran 1:44.25, while Spain’s Saúl Ordóñez Gavela was third in a time of 1:44.80 at the Memorial Jose Antonio Cansino/Meeting at Castello.

“I said after that race I was happier than I was after any other race,” English said this week of sealing qualification and breaking the Irish record all in one. “It’s probably up there with the European medals. David was a great record holder and I’m just thankful I got the record.

“The month of June was stressful in trying to get the standard. It was just a matter of doing it. I ran five races in 16 days - more races than I had planned. I was in a good enough position in the rankings - in the top 40 with the top 48 qualifying. But they can change quickly, so to get the standard was great.

“All worked out in the end. It turned out that I wouldn’t have qualified through the rankings had I not made the standard. I always wanted to run the standard and knew how quickly you can drop in those standards. Thankfully I did.”

A three-time European medalist, English took part in the 2016 Olympics in Rio, making it through the initial heat. In a competitive  semi-final featuring Olympic champion and world record holder David Rudisha, English finished in fifth place with a time of 1:45.09.

Boyce is approaching his third Games, and was the first Irish athlete across all sports to achieve an Olympic qualification time.
The 34-year-old will compete in the Men’s 50km Race Walk alongside Rio Olympian Alex Wright.

The Milford native competed at the 2012 Summer Olympics in London in the 50k walk, coming 29th, and in Rio, managed to improve on that finish by 10 places. In 2019, Boyce came sixth in the World Athletics Championships in a time of 4:07:46. His personal best is 3:48:55. Boyce is currently training in Guadix in the Sierra Nevada mountains in Spain.

Flanagan is from Gortin, Co Tyrone, and is competing in the Olympics for the first time, in the 3,000m Steeplechase. The former Sacred Heart College, Omagh, pupil, came through the ranks at Omagh Harriers before earning a scholarship at Adams State University in Colorado, where she runs with the Carmen Runners AC.

She recorded a time of 9:42.71 minutes at a meet in Lucerne, Switzerland, to seal her place in Tokyo on the last day allowed for competition. The 25-year-old is a twin of Roisin, who has also joined the Ballybofey-based club recently.

“I’m still trying to get my head around it,” she said. “I thought getting to the Olympics was something that might happen in the future but now I got it at a younger age. I had a long and taxing season, where I tracked by ranking points. I would not have qualified for the Olympics without Patsy here. He got me into some high class meets.

“The last minute one, in Switzerland, was where I managed to secure my spot. I remained determined and managed to get refocused and took the pressure off to go in there and compete.

“I tried not to think about it. I thought I had nothing to lose but there was still pressure as it was the be-all and end-all.”
McGonagle, the club chairman, said: “I told Mark just get out of the first round and then let’s see what happens in a semi-final.

He’s very experienced and he and Brendan have carried the flag for so long. For Eilish, it’s all about the experience. This girl is going places and it’s been her dream.”

Finn Valley AC will celebrate its 50th anniversary with a Golden Jubilee Night to be held in November. A date for this event will be confirmed officially after the return of indoor dining and the expected easing of Covid-19 restrictions. A book documenting the club’s history from 1971-2021 is also being produced and there are plans for a photographic exhibition at the Finn Valley Centre.