MARKSMAN: How the Donegal players fared in the exciting win over Derry in Ballybofey 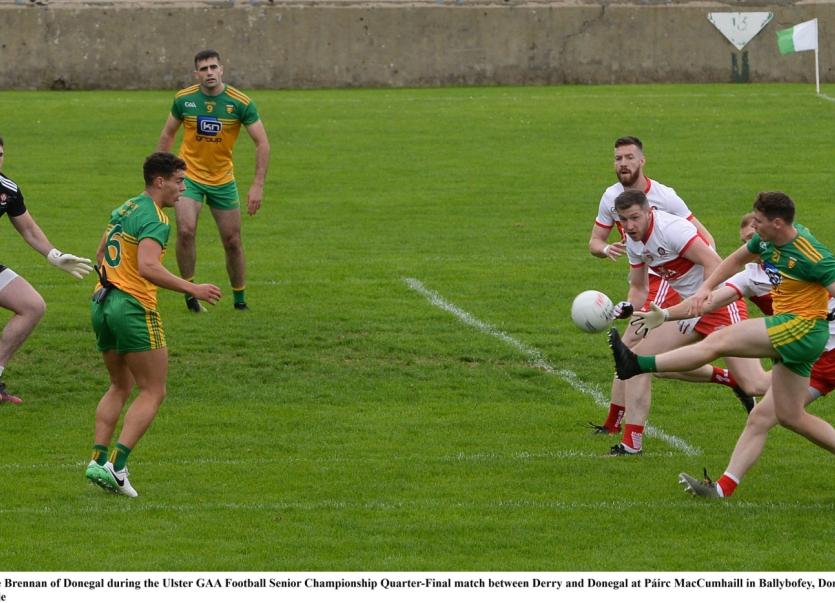 It was a mix of the good and not so good for Donegal, but for sheer guts and determination, the players deserve great credit to eventually get the win over Derry.

Here are the marks for the game

SHAUN PATTON: A couple of slips led to Derry points. A fisted clearance could have led to goal. Otherwise kick-outs very good. 6.5

EOIN MCHUGH: Had a busy game on Benny Heron until the Derry man got booked. Most of his work was defensive. 6.5

NEIL MCGEE: Limited Niall O'Loughlin to a point and got forward to help Donegal on a number of occasions. 7

STEPHEN MCMENAMIN: Did reasonably well on McGuigan but was taken ashore after picking up a yellow card 6.5
ETHAN O'DONNELL: In for his first start, did well in the opening half, getting on a lot of ball before being substituted in second half. 6.5
ODHRAN McFADDEN FERRY: Was a surprise when he was withdrawn. Was working hard up and down the field. 6.5

EOGHAN BÁN GALLAGHER: Put in a really big shift, both in defence and getting forward on many occasions. 7

HUGH MCFADDEN: Not as dominant as usual, the captain for the day still worked really hard and blocked a Derry goal early on. 7

CAOLAN MCGONAGLE: A real workhorse. Was able to break the tackle time and time again. one of his two points may have a question mark attached but still one of the leaders. 8

CIARAN THOMPSON: Ran himself into the ground but didn't get into any real shooting positions. Was replaced after picking up a late challenge. 7

RYAN MCHUGH: Not the player we saw in Newry, McHugh started at centre-forward and himself and Gareth McKinless cancelled each other out. 6.5

MICHAEL LANGAN: Three superb points and another classy display from the St Michael's man, despite getting special treatment. 8

NIALL O'DONNELL: Really stood up when Donegal needed leaders. Probably his best ever display in a Donegal shirt and deservedly won man of the match. 8.5

PATRICK MCBREARTY: If the marks were given out at 69 minutes, it would have been hard to give the Kilcar man a big rating, but when the chips were down he delivered. 7.5

JAMIE BRENNAN: Got Donegal off the mark and also hit a good second point. Was given special treatment by Brendan Rogers. 7

BRENDAN MCCOLE: In for McMenamin on 40 minutes, McCole did his job on McGuigan superbly. 7

PAUL BRENNAN: The Bundoran man seems to perform best when coming off the bench and apart from his point, was central to Donegal's win. 7.5

MICHAEL MURPHY: Donegal were in trouble when the Glenswilly man was introduced and he played his part. 7.5

ODHRÁN MAC NIALLAIS: Had a calming influence on Donegal and also played a big part. 7

OISIN GALLEN: Not on long enough to rate.