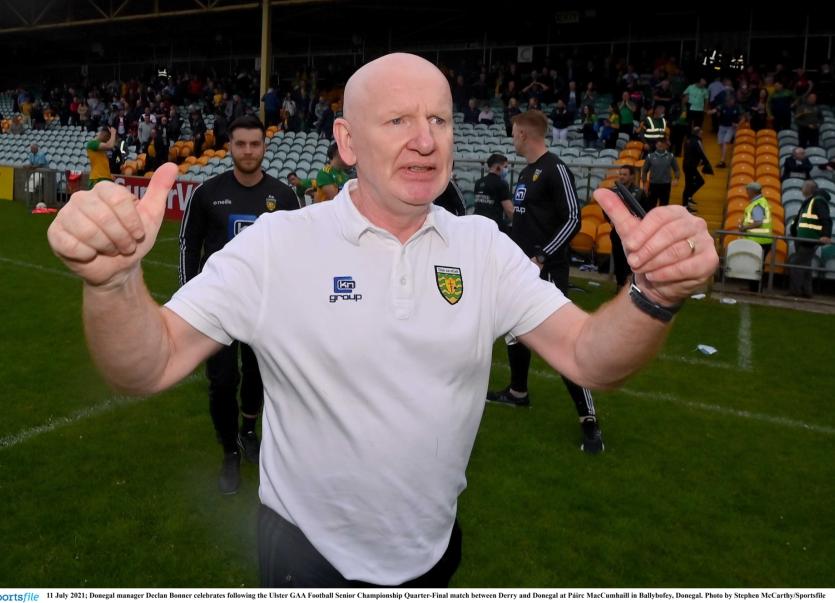 "It’s been thrown at this group about character and when we come down the winning straight that we are fairly brittle. But that’s not the case. There is great character in this group, and we had shown in throughout the National League campaign, coming from big deficits and today was no different to be quite honest," said Declan Bonner speaking after the win over Derry in MacCumhaill Park.
"We didn’t panic, the substitutions were important to us going in and yeah, the right man at the right time was Patrick McBrearty and he put up a brilliant score.
"We had spoken about it going down to the wire to be honest. We knew what Derry was going to bring and they brought it in abundance.
"It was a real Ulster Championship match to be honest, I was just delighted, as I said in the hotel earlier on, if we come out of this with a one point win we would be delighted with it," he said.
The Donegal boss agreed that it looked as if the game was going to extra-time and he said he would have taken that when his side were four points down at one stage in the second half.
"But the lads dug in. We got some really good scores, Michael (Murphy) kicked a couple of frees and had a real steadying influence on it.
"In saying that, Derry were very, very good, there is no doubt about it. They are on the rise and they put in a serious, serious shift. Some unbelievable scores to be honest."
Asked about how quiet Patrick McBrearty had been until those exhilarating closing minutes, Bonner said: "There is no doubt, he was well marshalled and but, when you have Patrick McBrearty, he has the confidence in himself. Doesn’t matter how well he was playing, he was taking that shot on and it was a brilliant score."
Bonner was really pleased with the way Donegal concentrated in the final minutes as Derry came looking for an equaliser.
"I think on that, we showed real good qualities. They held the ball for around two minutes, our discipline was very good, our focus was completely 100% and we didn’t want to give the easy shot away, we didn’t want to commit a foul.
"It was important to put the pressure on and eventually the clock was against Derry.
"But it was a titanic battle from start to finish and I am just glad we are in the semi-final next weekend.
As regards the fitness of Michael Murphy, Bonner said: "Listen, he was passed fit for the Down game and he came out after 30 minutes, so we got another 30 minutes into him today and that was important for us to be quite honest. It’s one thing saying it, he’s got to get football, he’s got to get back in and so we’re delighted that he got through that game. He’s come through it well," said Bonner, who was happy for the unsung heroes of the team.
"Those guys have training extremely well and the since I’ve come in the likes of Caolan McGonagle, Niall O’Donnell and Paul Brennan have all been huge parts of the group. They all really put in a big shift, it’s the strength in depth that we have and the subs coming off the bench did rightly."
Next up for Donegal is Tyrone on Sunday next in Brewster Park, Enniskillen and the Red Hand management team of Feargal Logan and Brian Dooher were in the stand watching.
"They’ll probably be saying that they’re going to be favourites going into this championship match next weekend. Not us - Tyrone will be favourites. Donegal and Tyrone have had huge battles down through the years and it’s going to be no different next Sunday in Enniskillen. The games are coming thick and fast but it’s where you want to be.
"Next Sunday will be different again, and in fairness Tyrone were impressive in the way they dismantled Cavan and the way they went about their job in a really good manner. It’s going to be another nip and tuck and a real Ulster championship affair and another hectic 70 minutes on the sideline," said Bonner, who said that Peadar Mogan's absence was because he picked up a knock at training on Thursday night.