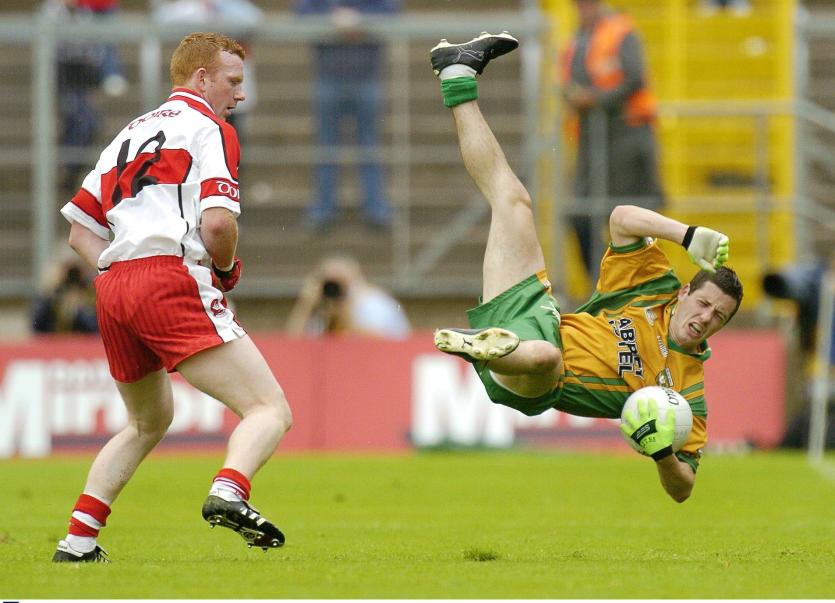 "It was strange. I suppose going into it I always thought it was going to be tight. Derry, they had a great league campaign and I know it was only Division Three, but they still got great confidence out of that.
"Then you had the Rory (Gallagher) factor too. And knowing Donegal so well, I always felt it was going to be tight and I'm sure the boys felt that too. They always knew it was going to come down the home stretch.
"You have to be still impressed by Donegal. The game was going away from them a couple of times, but they didn't panic, to be fair to them.
"Seeing the reports after the game, the character shown by them was the big factor.
"You could argue that Derry were the better side, in the first half definitely. They didn't really punish Donegal and in championship you need to be taking every chance you get. Even that ball that came off the post and the couple of frees that they missed. To punish Donegal you need to be taking them chances and they didn't.
"I suppose Donegal would have been relatively happy at half-time. Derry came back out and started that third quarter well. I suppose up until (Michael) Murphy came on, the game swung again. But again they didn't panic and they seemed to get the right players on the ball at the right time. Murphy won a free, scored a free; Ryan McHugh won a free.
"Obviously Paddy (McBrearty) was being kept quiet and Paddy would admit himself that things weren't going well. Chrissy McKaigue was having a great game on him. But it shows the measure of the fella, he kicks a great score at the end.
"It was Donegal's craft, getting the ball to him. Even with things not going well for him, he was able to produce a brilliant score.
"I thought Paul Brennan had a great game when he came on; he won a ball over at the sideline and turned it over and he got a score as well. He showed great energy.
"Odhrán Mac Niallais also had a big influence winning the free and then giving the pass to Paddy for the winning point.
"I think that anyone who thought Donegal were going to win handy, that was never going to be the case. I don't think Declan (Bonner) or any of the boys thought that. Ulster championship games are not easy won and Derry are a coming team. Their half-back line caused us problems.
"It was funny, you felt Donegal were a bit lax at times. They were standing off the tackle a bit, but overall their experience showed. Derry will be kicking themselves because they had the chances."

DONEGAL V TYRONE
The Four Masters man also gave his views on next Sunday's Ulster semi-final when Donegal meet old foes Tyrone in Brewster Park, Enniskillen.
"I didn't see a lot of the Tyrone-Cavan game but to be honest Cavan had a very poor league campaign. I know they put up a good enough fight for the first 20 minutes.
"Then obviously Cathal McShane coming back will give Tyrone a lift. But listen, it is going to be another battle. It's going to go down the home stretch. Tyrone would have been eyeing up that game for a long time now. They will see it as a chance to turn Donegal over.
"But listen, Donegal are not going to fear them either. It all depends how the bodies are after Sunday. There is also the Murphy factor; how fit is Michael? It is hard to know.
"It's a difficult one, starting him and then having to take him off would give Tyrone a lift. It is hard to know. I would feel if he is anyway fit, it would be best to hold him. It really depends on how fit he is.
"If the game is going down the home stretch and you bring him in, it would give everybody, the crowd, players a lift again. He had an influence on Sunday's game when he came on.
"I don't think he is 100% fit and I would be inclined to hold him. The reality is we need him, but it might be too big of a risk to start him and then have to take him off. It would give Tyrone a lift and it might take a wee bit out of our boys too.
"In fairness to the Donegal boys, Niall O'Donnell and Michael Langan did well last Sunday. I think they are brilliant footballers. Really, Niall O'Donnell stood up on Sunday when the game was in the melting point. Langan has been brilliant, it comes so natural to them, but they are still young.
"Every sub used on Sunday made an impact. I thought (Stephen) McMenamin would be a loss going off because is that sort of a dogged player, a man marker, something that Donegal might be short of, man to man stuff. But every man that came in did well.
"Eoin McHugh had a good game, he was busy and lively and wanting to get on the ball. Definitely the boys that came in made a difference and they will be needed again on Sunday," said Dunnion.