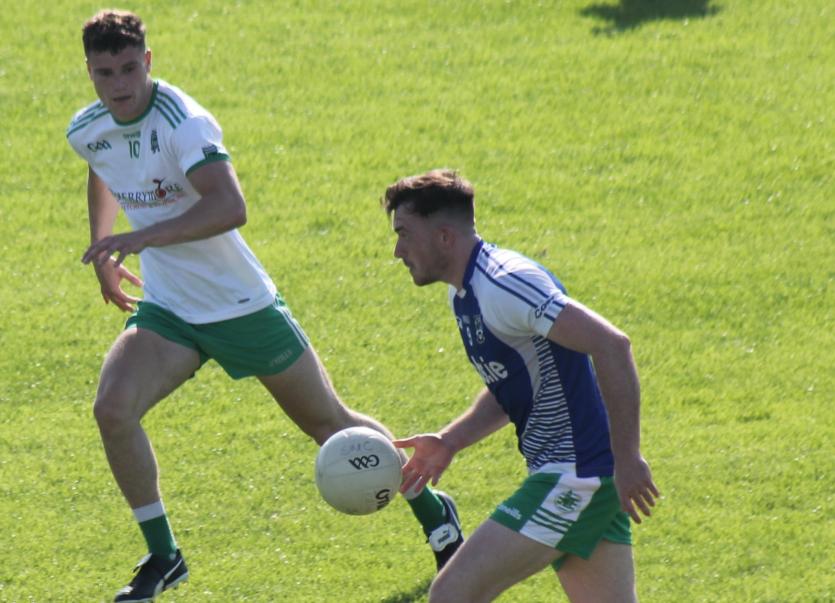 Jamie Keegan led from the front as he helped his Seán MacCumhaill's team to a much-needed win in Division 2 on Saturday evening in MacCumhaill Park.

Aodh Ruadh, who sit at the top of Division 2 with 5 wins out of 5 going into this fixture, were the bookies favourites against an injury hit home side, but a resilient and hard-working MacCumhaill's side had enough in the tank to get across the finish line with just a point to spare in the end.
Keegan, whose tally for the day was 0-5, opened the scoring after 5 minutes, with the opening exchanges between the sides few and far between as they tried to suss each other’s setup out in a sun-drenched evening on the banks of the Finn.
The energy sapping dead-heat conditions no doubt had an impact on the tempo of the game at times and with the home side’s rear-guard proving impermeable in the opening exchanges it took 10 mins for the visitors to get their first score on the board with a free from the boot of Diarmaid McInerney who topscored for his side on the day.
MacCumhaill's led 0-4 to 0-1 at the much awaited first half water break via points from corner back Cian Mulligan, an excellent point from Keegan who outmanoeuvred 3 Aodh Ruadh men to chip over from range and a well put together foray from the home side saw Aaron Kelly point over also. Aodh Ruadh emerged from the water break with real intent and fired over points from a Nathan Boyle 45’ and Shane McGrath. A Darren O’Leary fisted point put 2 between the sides again but Aodh Ruadh would prove more fruitful in front of goal in the next passage of play with points from Diarmaid McInearny and Michael McKenna had the sides level at the interval at 0-5 each.
Similar to the first half, Keegan opened the scoring for his side and the industrious Chad McSorley was on hand to point over after Keegan’s other attempt was blocked down. Warning bells went off soon after for MacCumhaill's when Shane McGrath’s effort came back off the upright and an alert Eoin Gallen and home side defence stepped up to clean up the follow up attempts.
Eamonn McGrath pointed for the visitors to open their second half account but MacCumhaill's produced another period of excellent play and hit the next 4 scores from Stephen Mulligan (2) and Keegan (2). McSorley would hit the final score for his side after an excellent run and pass from Gary Wilson.
Trailing by five points the visitors to their credit never gave up. McInerney, McKenna and Granaghan from play and another free from McInerney at the end wasn’t enough to get anything from the game for them and despite a nervy end to the game, MacCumhaill's held on to their lead and were good for their win.