Donegal sizzle out against Tyrone in Enniskillen 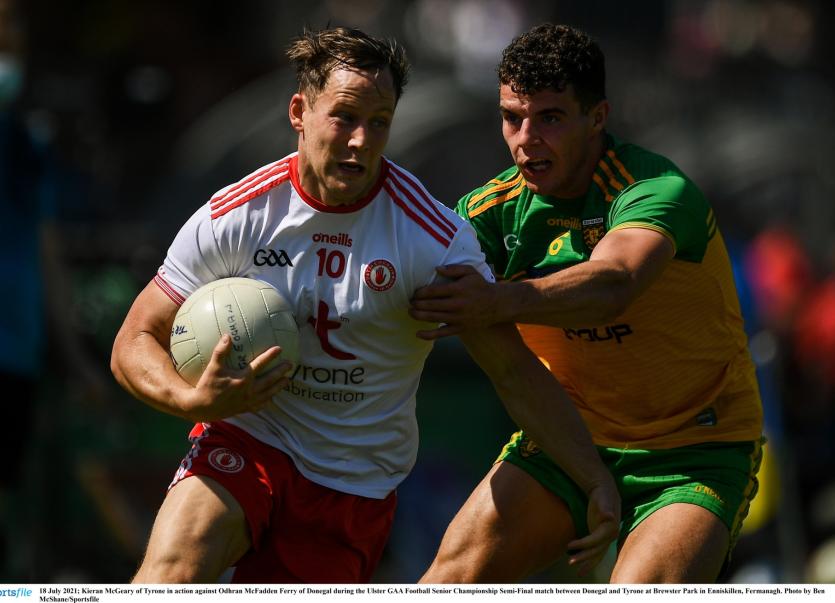 The numbers eventually caught up with 14-man Donegal as Michael Murphy missed a penalty and was sent off in the first half as Tyrone came through at baking Brewster Park to seal an Ulster SFC final berth against Monaghan.

With Donegal 0-7 to 0-5 in front and Ciaran Thompson fouled by Rory Brennan, referee Joe McQuillan black-carded the Tyrone defender and awarded Donegal a penalty, with a goal-scoring opportunity having been denied. The gods seemed to have been edging towards Donegal.

Murphy, on 29 minutes sent Niall Morgan the wrong way, only to see the ball hit the base of the Tyrone post, with Feargal Logan and Brian Dooher’s team fortune not to concede a second penalty with Michael Langan was scythed down by Frank Burns. However, that well-versed mantle of a penalty being hard enough to get a second impossible no matter how obvious, seemed evident.

Tyrone were buoyed and soon Donegal lost their skipper, who picked up a black card to add to a previous yellow for a foul on Kieran McGeary and those gods seemed to have changed their mind, with Tyrone getting in at the break a point in front, 0-9 to 0-8, with Darren McCurry’s free the last kick of the half. Mcurry would score seven in all.

The symmetry between the teams was evident in the opening quarter, with the competitors matched blow for blow. Donegal were 0-3 to 0-1 in front, with Jamie Brennan, Niall O’Donnell and Michael Langan posting after Kieran McGeary’s opener.

Tyrone edged 0-4 up with Darren McCurry scoring twice, the second of which Donegal had Shaun Patton to thank for having saved initially from McCurry, who had a go for goal after being played in by Brian Kennedy, who intercepted a free Langan attempted to find Caolan McGonagle with up the field.

Neil McGee had to be helped from the field and replaced by Stephen McMenamin coming in inside of five minutes.

By half-time, Tyrone were one in front but the momentum they’d had felt going in at the break, having survived the penalty and then saw Donegal lose their talisman. Declan Bonner’s team were certainly right in the thick of it still, although for some in attendance that confidence had eroded to hope.

Tyrone opened the second half with a couple of points, with Niall Sludden and then substitute Tiarnan McCann and with Patton having bother off the tee at the time, Donegal’s challenge looked to be unravelling.

However, a superbly created move with Eoghan Ban Gallagher and Ryan McHugh set up McGonagle to smash past Morgan on 40 minutes, to bring Donegal level at 1-8 to 0-11.

The heat was sapping and Tyrone, with the extra man, seemed to be picking up their scores easier, with Doneal doing extremely well to cling on in the third quarter. The Red Hands took less than two minutes to wipe out McGonagle’s goal, with quickfire points from Mattie Donnelly’s brace and Peter Harte, to go 0-14 to 1-8.

Donegal, though, rallied, with points from Patrick McBrearty, Langan and O’Donnell bringing them level, before McKenna’s point meant Tyrone were 0-16 to 1-12 in front by the second well-deserved water-break.

Tyrone’s legs kept pressing on and in the final quarter their superiority was confirmed. McCann would score three from the bench and McCurry’s score to make it 0-20 to 1-14 was greeted with a cheer louder than had been heard before.

At the other end, Donegal’s challenge withered in the heat, with Langan’s late free going wide to end their hopes. The scene at the end, glorious sunshine and Tyrone celebrations couldn’t have been more opposite to their loss in Ballybofey last November in the muck with Mickey Harte slumped in the main stand for his last post-match interview before calling it a day.

Now it’s Logan and Dooher who are in charge as Tyrone prepare for Ulster final day. Donegal, for their part, are at the crossroads. Their summer is over, right at its height.