Bonner: 'To me it wasn't a sending off' 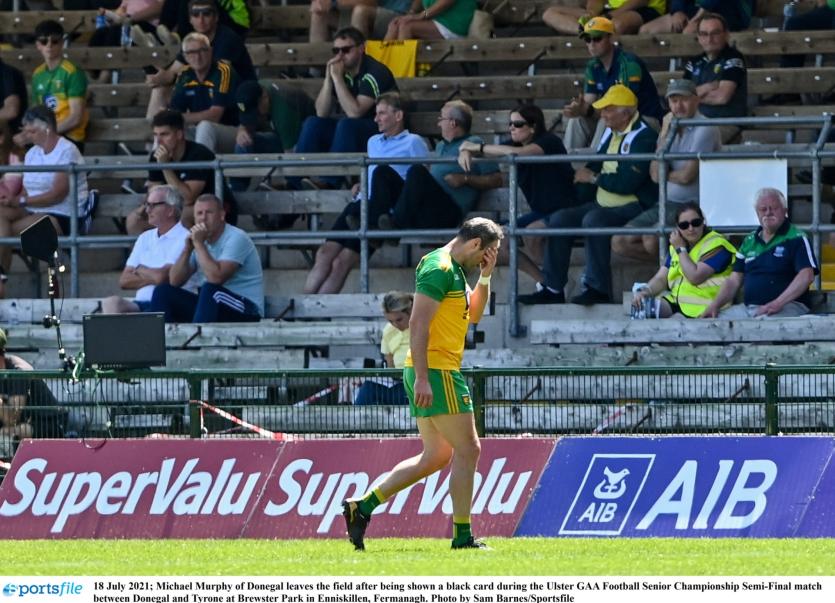 Declan Bonner refused to be drawn on his future in the wake of Donegal’s Ulster SFC semi-final loss to Tyrone.

Bonner saw his team go down 0-23 to 1-14 in sweltering conditions at Brewster Park in Enniskillen and was trying to put his thoughts into words afterwards surrounded by a press pack who were donning shorts and t-shirts.

“It’s not time to talk about it or look at it,” he said when asked the question. “It’s frustrating. We’ll sit down and lick our wounds over the next couple of days and we’ll see after that. “It’s disappointing. I’ve been involved in Championship football for a long time. There is no worse feeling than being involved in a losing dressing room. That’s part and parcel of it.”

Four years in, Bonner won back to back Ulster titles in 2018 and 2019, before losing surprisingly to Cavan in last year’s winter championship and now dumped out by Tyrone in the sunshine. The Donegal manager was, like the rest of us, of the opinion the match swung on a number of key incidents over the course of the 70 plus minutes.

About 29 of those minutes in, Donegal looked to be in as good a position as imaginable in the circumstances. Already 0-7 to 0-5 in front, the ball was sitting on the Tyrone penalty spot, Michael Murphy was readying himself and Rory Brennan was making his way to the sin-bin.

And then the tide turned. Murphy’s penalty trundled off the post and the Donegal captain wouldn’t make it to half-time and having felled Kieran McGeary, was given a back card to add to his yellow and before you knew it Tyrone were in front.

Donegal gamely held on in the third quarter, with a Caolan McGonagle goal breathing fire into their challenge until the wheels came off late on.

“Michael owes Donegal football nothing,” Bonner said of Murphy. “Michael has been an absolute leader and has been absolutely immense in the time he has been playing for Donegal. It was frustrating for him, no doubt. He was very frustrated that he got the card at the time. Sometimes these things go for you and sometimes they don’t. Without having had a chance to look at it, to me it wasn't a sending off.

“We were playing extremely well. It was nip-and-tuck and I always felt that it would go down to the final straight. It was just the energy that was consumed by the 14 men. Those things happen in championship football and it was probably a key moment in the game. I chatted with Michael and he's very disappointed. Some days decisions go for you.

“There was a couple of key moments in the game, particularly in that period before half-time which was disappointing and frustrating but the lads showed tremendous character in sweltering heat out there when down to 14 men. It was always going to be very difficult. I am immensely proud of the work and the effort the guys put in. Ultimately it caught up with us in the last five or six minutes, battling with 14 men against 15 in those conditions.”