MARKSMAN: How the Donegal players rated in Tyrone defeat in Enniskillen 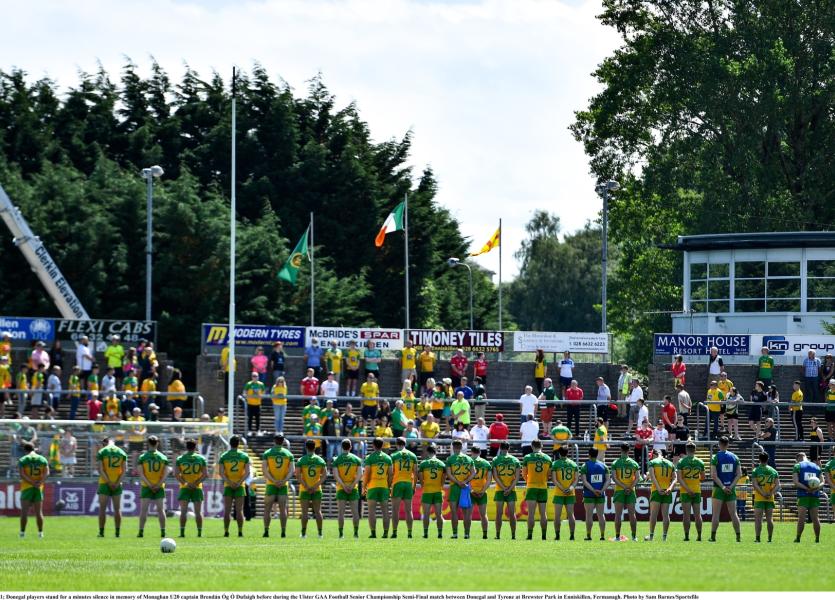 Donegal pictured prior to the game Picture: Sportsfile

It was a battling display by Donegal, down to 14 men in the blazing sun in Enniskillen. Here are the player ratings from the game:

SHAUN PATTON: Could not be faulted under any heading. Made some great saves and kick-outs very good. 7.5

BRENDAN MCCOLE: Defended really well and also got forward, especially in first half. 6.5

NEIL MCGEE: Put his body on line and took a very big hit which didn't get a card. Not on long enough to rate.

EOGHAN BÁN GALLAGHER: By a good distance Donegal's best player. Was initially giving marking duties on McCurry but flourished when released and was relentless in his forward runs to keep Donegal in touch. 8

PEADAR MOGAN: Did well with one good point but overall just didn't seem to have the fitness levels. 6.5

ODHRÁN MCFADDEN FERRY: Put in a very big shift and was willing to the end before being replaced. 6.5

RYAN MCHUGH: Had a big battle with Meyler but while winning a few frees. Was involved in goal but was unable to put his usual stamp on the contest. 6.5

HUGH MCFADDEN: Had a good first half and was instrumental in a turnover which led to the Donegal penalty. 7

CAOLAN MCGONAGLE: Finished the goal well and could have had a second, but on the periphery at other times. 6.5

NIALL O'DONNELL: Got a good point but also found it difficult to put his stamp on the game. 6.5

CIARAN THOMPSON: One of his best games in recent times, Thompson was always willing to take the fight to Tyrone. 7

PATRICK MCBREARTY: Just couldn't free himself from Ronan McNamee on a difficult afternoon for the Kilcar man. 6

MICHAEL MURPHY: Was unlucky to be sent off as first card was very soft. Penalty miss was a big turning point in game. Maybe it would have been wiser not to start him. 5

JAMIE BRENNAN: Similar to last week, Brennan got two points but also failed to make an impression in open play. 6.5

STEPHEN MCMENAMIN: In for McGee after five minutes, McMenamin put in a very big shift and was a willing runner throughout. 7

PAUL BRENNAN: Just like last week, Brennan injected energy for Donegal and can be happy with his contribution. 7

ODHRÁN MAC NIALLAIS: Got on plenty of ball around midfield but overall unable to make a huge impression. 6

EOIN MCHUGH AND ANDREW MCCLEAN: Not on long enough to rate.