Maxi Curran: 'We just have to pick ourselves up and go again' 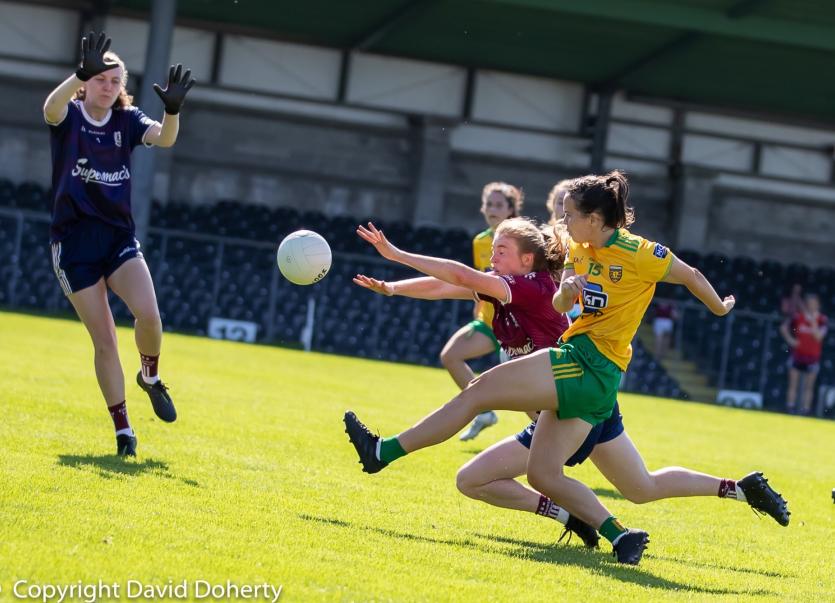 Geradline McLaughlin takes a shot at the Galway goal in Sligo on Saturday. Photo@ David Doherty

Maxi Curran, the Donegal manager, admitted it was still a bit of a blur as he tried to collect his thoughts in the wake of his side’s loss to Galway in the TG4 All-Ireland Senior Championship.

Donegal were trundling along nicely at the break, 1-6 to 0-4 in front before everything changed in one minute and 51 seconds. Galway substitute Ailish Morrissey scored two goals, both after the repositioned Nicola Ward had got a goal to get the Connacht team motoring. Galway sat in to protect their lead and won 3-10 to 2-11 in the end.

Curran said: “At half-time we were very happy with how we were fairing out but then there was that two minutes of madness. It blew the whole thing to pieces and to be honest the whole thing even now is a bit of a blur. I don’t know what happened. That’s football. Strange things happen.

“They maintained that cushion then. Nicola Ward went to centre-half forward, got a goal and then after the other two goals she was back at sweeper and they rode the thing out then. Fair play to them. We always knew they were a very good team and they’ve some fantastic players. A team of that much talent are always a threat.”

Donegal hammered Galway 4-21 to 2-11 in Tuam in Division 1, although Curran did stress in the wake of that victory that the championship meeting would be unlikely to follow a similar path.

“We were very aware of the quality of player that Galway were missing in the league meeting in Tuam that day,” he said. “We knew it was going to be a very different Galway come championship.”

Galway can now put their feet up, having won both their outings in the three-team pool which sees the top two progress to the quarter-final, having beaten Kerry 2-12 to 2-11 first time out in Ennis. Donegal face Kerry this Saturday, back in Tuam, knowing they must win to seal a last eight spot.

“In regards to playing Kerry next week, for us, nothing changes,” Curran added. “It’s a bit of a blow to the confidence, yes, and it puts a lot of pressure on the Kerry game now. It’s do or die, which is the way it may have been regardless. We just have to pick ourselves up and go again next Saturday.”