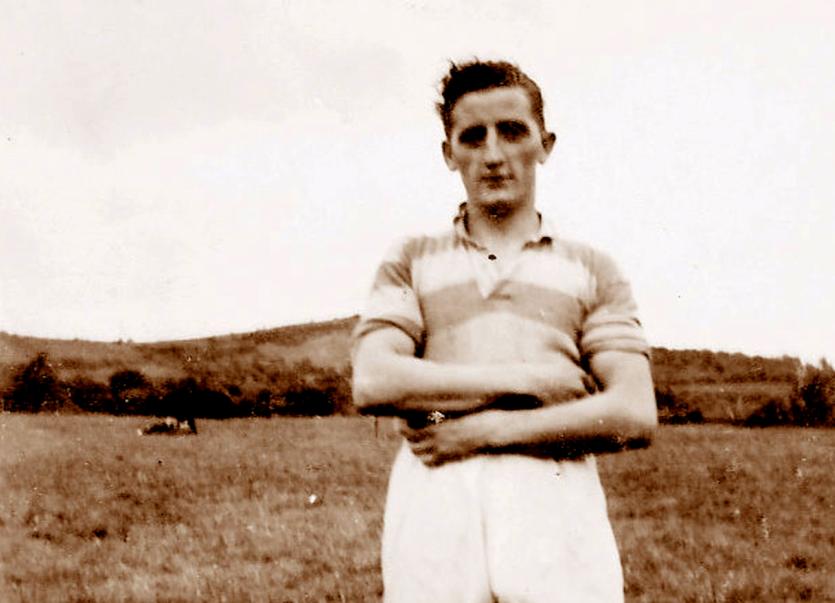 The late Tom Gallagher pictured in his playing days

One of the last links with a great era for Ballyshannon Gaelic football was laid to rest this week in Abbey Assaroe.
Tom Gallagher of Cluain Barron played alongside Red Jack Gallagher and Mick Melly, legends of the game in the 1940s. Tom was corner forward on the team (known then as Ballyshannon) that won the senior championship in 1951 and he was also on the Democrat Cup winning team of 1955. Indeed, he was still involved with the team when they lost the county final to Dungloe in 1957, a year that is remembered in this article by current Aodh Ruadh club President, Owen Roe O'Neill.
A member of a very well known Ballyshannon family, Tom's involvement with the local Gaelic football club was just one of his talents.
He was a current Vice-President of the Aodh Ruadh club and was also a very proficient handballer in his younger days.
Tom was an avid photographer and captured many great moments in the club's history, something that continued with son, Thomas, taking on the role in a professional capacity with the Donegal Democrat. Tom was also ever-willing to help on club lotto shifts or in any other capacity he could be of assistance to the club.
Of course music and verse were also great passions of his, and his exploits in that field with the Brass and Reed Band, as well as various other local groups and bands and the Musical Society have been extensively chronicled in the past few days.
His capacity to capture sporting moments with verse was also special, among them a special tribute to the first Donegal team to take the Anglo Celt home in 1972.

Ironically, a full verse of that song was dedicated to Joe 'Dodo' Winston, who also passed to his eternal reward just a week earlier. (see song at end of story).
Tom made his senior debut for Aodh Ruadh in the late 1940s in a Democrat Cup match against Glenties. It was a debut to remember as he was knocked out and spent the night in the old Glenties hospital. In fact, such was the nature of the injury and the lack of medical assistance at the game that he was supposed to have been anointed on the sideline!
And of course the family sporting tradition continued when both of his sons, Thomas and Seamus were a link to the teams that won Dr Maguire in 1951 and 1986.
The sporting legacy has continued with his grandchildren creating their own sporting history with Letterkenny Gaels, MacCumhaill's, Four Masters and Aodh Ruadh. Among those grandchildren are the Divers in Letterkenny, members of Donegal panels and, of course, Laura Feely from Ballybofey, a member of the Irish Women's Rugby international panel.
Current Aodh Ruadh club President, Owen Roe O'Neill played alongside Tom in the mid-50s and said he was "a handy corner-forward" on a team that included the likes of Jim 'Natch' Gallagher, Sean McHugh, John 'Spud' Murphy and Matt Regan.
"He had won a championship in 1951 and was on the Democrat Cup winning team of 1955. I remember he was still involved in 1957 when we were beaten in the final by Dungloe after being forced to play six times in the space of two weeks." That Dungloe team had Sean O'Donnell, Dom Murray, John Campbell and Dan Bonner.
Owen Roe also remembers Tom acting as umpire in a game when he got a box when soloing through on goal and bit his lip. "I knew there was blood and I went over to Tom and asked him if the tongue was alright and he said half of it was gone. He scared me as there was only a little nick."
There was also a great story attached to the 1951 senior championship final when Tom discovered that he had no boots to play. He had to borrow a pair from Liam McDevitt and there is a picture of the said boots shown in this page. His son, Thomas, remarked: "You would be arrested if you were seen wearing those today!" 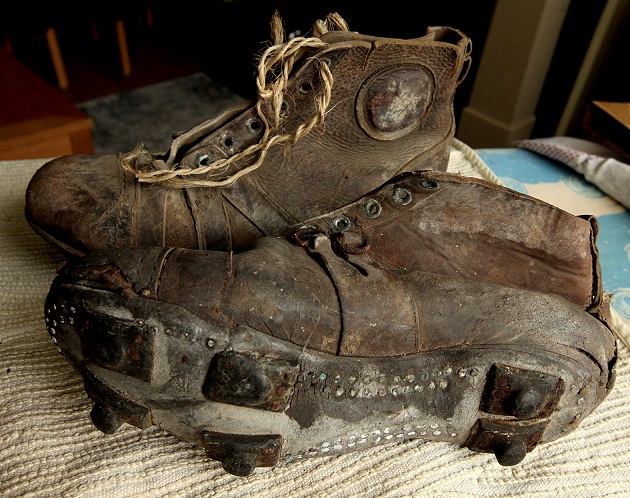 The boots worn by Tom Gallagher in the 1951 final.

THE MEN FROM DONEGAL - ULSTER CHAMPIONS, 1972
You have Kane and Donal Monaghan, McShea and Johnny Boyce
Men who hold the back line as solid as a vice
2
Then you have the half backs
The best on any pitch
With Carroll and Anthony Gallagher
That's led by Brian McEniff
Chorus
Down from our county came the lads in green and gold
The finest bunch of players that your eyes have ever seen
They can play a brand of football that is steady and so true
That proved their might in Ulster in the year of '72
3
When you come to the centre field
These lads are not so small
To see Bonnar and McFeely
When they rise to catch the ball
4
The half forward line has talent that can win a match in peril
With the substance of young Carney, McMenamin and O'Carroll
5
Now we have the forwards who play in front of goal
Granaghan and Sweeney who can taunt a mortal soul
6
And then you have young Winston
A kicker of great taste
When he scores from any angle
With elegance and grace
Chorus
The time has come when we must meet the champions Offaly
In the All-Ireland semi-final our hearts are all a glee
We have the beating of this team if they will play the ball
Because we are the Ulster champions
The Men from Donegal
Chorus
Composed by Tom Gallagher on 31st July 1972