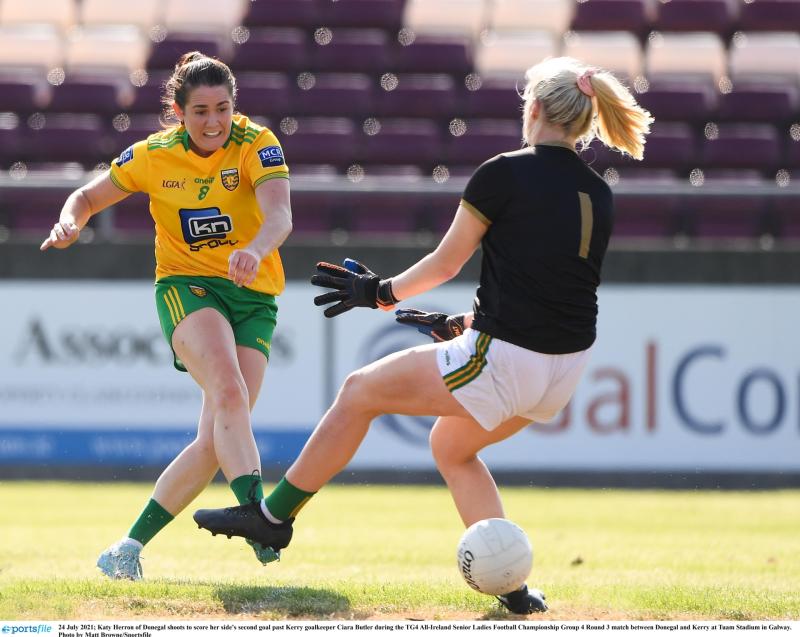 Donegal came out fighting to overcome Kerry and set up a TG4 All-Ireland Senior Championship quarter-final against four-in-a-row winners Dublin.

With both Donegal and Kerry having lost to Galway it meant the losers of this afternoon’s fixture at a sun-drenched Tuam Stadium would not only find themselves out of the championship, but also faced with a relegation play-off.

Maxi Curran’s team were 0-7 to 0-5 down six minutes before the break and mustered two goals in just 90 seconds to gain the momentum, with Geraldine McLaughlin and Kety Herron the goalscorers. McLaughlin would end the day with 1-9, with all but two points coming from play.

Firstly, Karen Guthrie played a short free to McLaughlin, who wriggled her way past Ciara Murphy and Aisling O’Connell, then Aislinn Desmond and Mary O’Connell before shooting home at the near post.

Then, when Niamh McLaughlin went long to Geraldine McLaughlin, a pass off set Herron free and she shot low past Ciara Butler to put her side 2-5 to 0-7 in front. In between those two goals, Kerry spurned a chance when, from close range, Louise Ní Mhuircheartaigh hit the crossbar and the rebound was blazed wide by Caoimhe Evans. 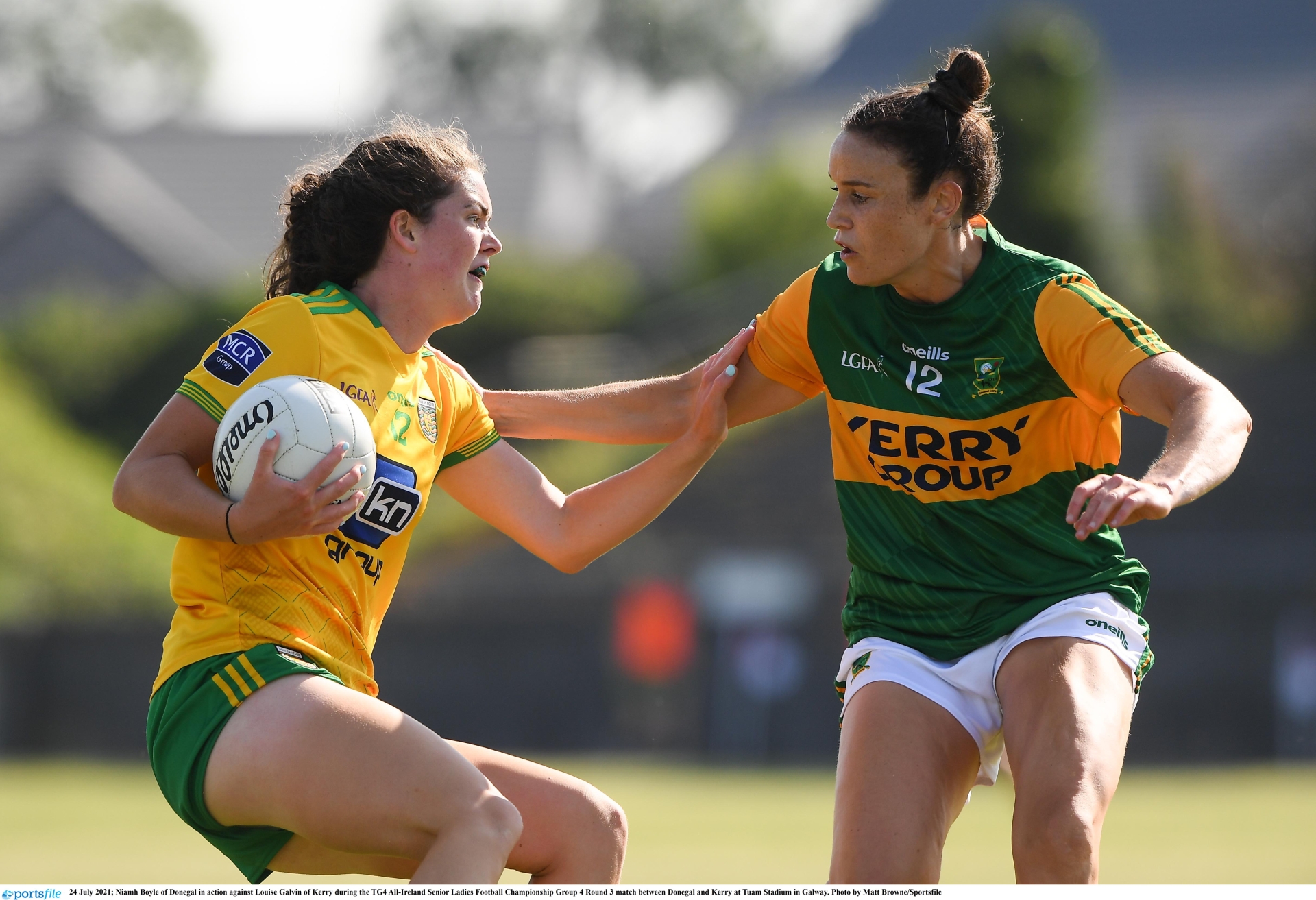 Kerry rallied after the break and scored two fine goals and came two within two points late on.

Donegal were left teetering on the brink following last Saturday’s bizarre 3-10 to 0-11 loss against Galway in Sligo, when the contest was turned on its head in 111 crazy seconds after half-time.

Galway, five down at the break, posted three goals in that brief timeframe to set themselves up for victory, which was their second of the campaign following a 2-11 to 2-10 opening day win over Kerry in Ennis.

That meant Donegal and the Kingdom were playing for their lives and Donegal were a little snatchy to begin with, kicking five wides in the first half with Kerry not hitting a single one.

Kerry were 0-4 to 0-3 up at the point, with Hannah O’Donoghue scoring twice, while Guthrie, Geraldine McLaughlin and Niamh McLaughlin, who was having joy from deep, got Donegal’s first quarter total.

Niamh Carmody and O’Donoghue edged Kerry out to a 0-6 to 0-3 lead and there might’ve been a worry at that stage for Donegal. However, their two quickfire goals turned the tide and enabled a half-time advantage of 2-6 to 0-7.

Well aware of how the second half started a week beforehand when their cushion was also five - Donegal held firm and three Geraldine McLaughlin points made for a 2-9 to 0-7 scoreline on 36 minutes. 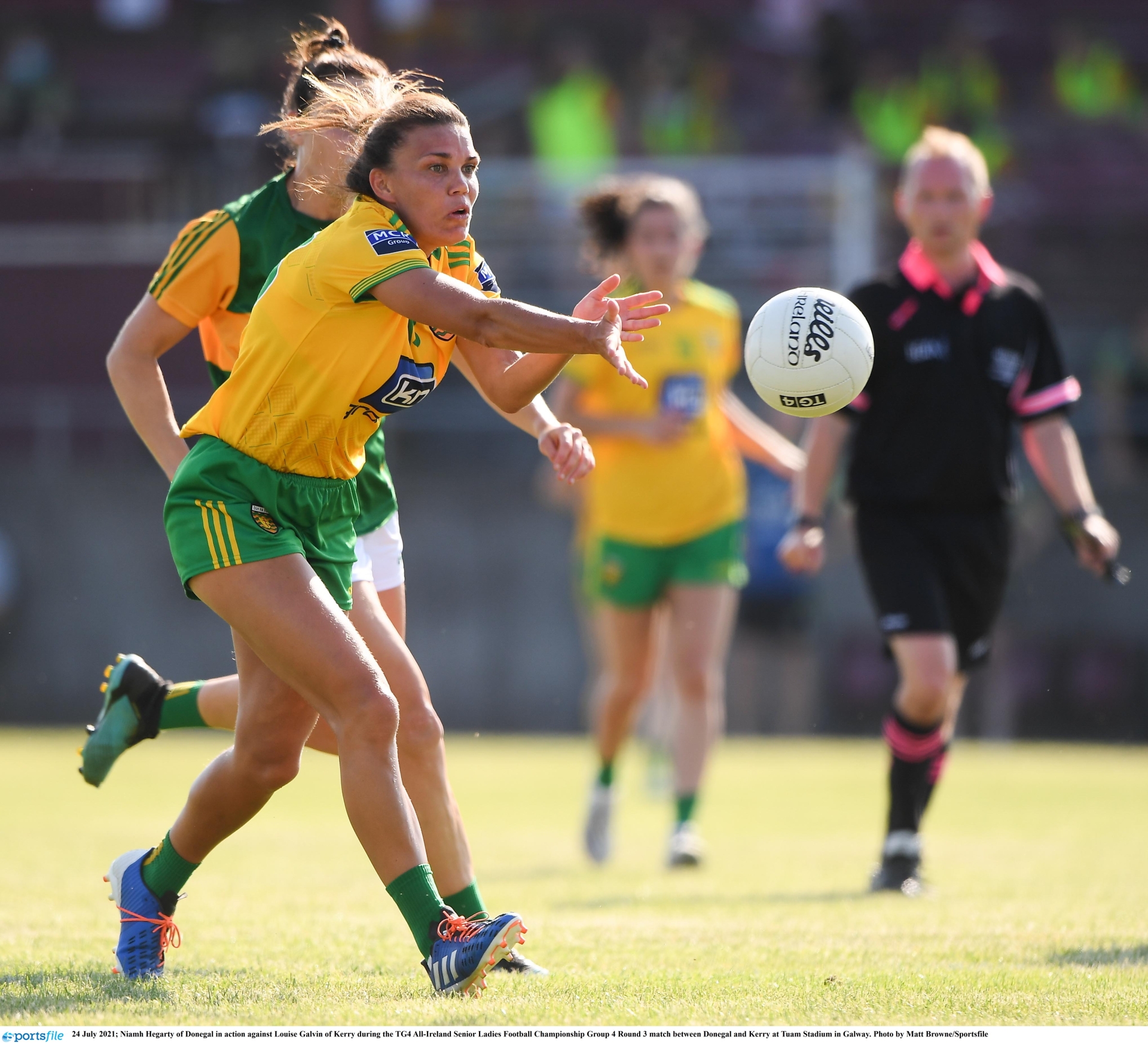 Kerry got back into it with a fantastic goal from Louise Ní Mhuircheartaigh, who collected a pass on her chest before drilling past Aoife McColgan on the turn from Anna Galvin’s ball in.

Moments later, Herron was denied a second goal when her shot was saved by Butler and then grasped on the line by Julie O’Sullivan. Geraldine McLaughlin picked up the loose change to score a point at least. It all meant by the three-quarter mark Donegal were six to the good, 2-11 to 1-8.

With 14 to play a second Kerry goal halved the margin, when Niamh McLaughlin was dispossessed in midfield, a fine run and finish from Carmody which concluded when she drove low across McColgan, meant the last eight berth was still up for grabs.

And when Ní Mhuircheartaigh split the posts from a tricky free, it was down to two. Geraldine McLaughlin once more proved to be the one Donegal could rely on, with two more fine points from play and then setting up Amy Boyle Carr, whose effort on goal was stopped by Butler.

That kept Kerry in the match, with five to play, although Donegal were looking defensively sound. They’ll need to take that type of resolution onto their meeting with Dublin.