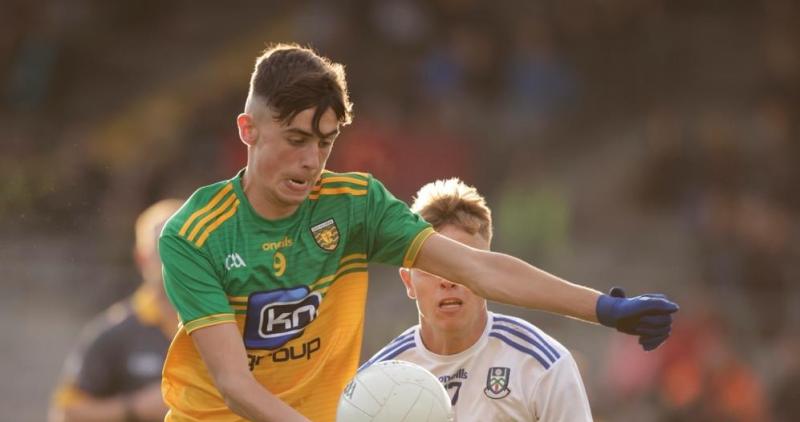 Super subs Michael Callaghan and Gary Kelly struck points in the last quarter as 14-man Donegal produced the bravest of performances to see off Monaghan in the Electric Ireland Ulster U-17 Football Championship quarter-final.

Luke McGlynn scored a penalty to give Donegal a healthy advantage initially at St Tiernach’s Park in Clones, when Oisin Caufield was taken down by Monaghan goalkeeper Declan McKenna, who escaped unpunished.

Donegal lost Ethan Friel to a second yellow for a foot-block as Cian Conlon tried to square on 26 minutes, when they led 1-3 to 0-3. By half-time it was 1-4  to 0-5 for Donegal. Monaghan were driven on by the superb Stephen Mooney and went ahead in the third quarter as the numbers game looked to be working against Luke Barrett’s Donegal side.

They refused to buckle, though, and substitute Callaghan scored two excellent points, the second ably-assisted by another strong run from Caulfield. Then, using possession intelligently and defending frenetically, a chance was made for Kelly to leave Donegal three in front, 1-9 to 0-9.

Mooney kicked his seventh point to leave two in it in as excitable an atmosphere imaginable. Some of the Donegal defending late on was far from textbook, such were the circumstances, but was was whole-hearted and effective. And Donegal broke in an attempt to put three in it, with their moves breaking down at the last.

With two minutes to go, Aaron Cullen - who made an excellent first half save - made a dart from goal that left hearts in mouths. Those old enough to remember will recall his Aodh Ruadh clubmate David Greene doing something similarly nerve-shredding in the 1996 Ulster MFC final replay against Derry.

In the sixth of five minutes of injury-time, Cullen was on hand to grasp a ball in the square that was lobbed in from Monaghan full-back Philip McNally. Donegal now take on Armagh, who beat Derry, on Friday week in the semi-final.

At the break, Donegal U-20 captain Rory O’Donnell presented a copy of the No 6 jersey to the Monaghan chairperson Declan Flanagan. The jersey will be passed on to the family of Monaghan U20s captain Brendan Óg Ó’Dufaigh.

Flexing their muscles a week beforehand to comfortably defeat Antrim 4-22 to 0-8, Donegal at least had a game under their belt in an uncertain year for everyone.

They enjoyed the better of the opening quarter, following which they were 1-3 to 0-2 in front, with MacCumhaill’s duo Sean Martin and Conor McGinty scoring early and Paddy McElwee getting off the mark having scored two goals against Antrim.

Monaghan looked dangerous in attack with a Conlon free and Niall Rice scored only for McGlynn to tuck home a 17th minute penalty to put Donegal in a decent position at the water-break, four points to the good.

However, two scores from Mooney, either side of the dismissal of Friel, meant Monaghan were starting to rev. Donegal looked in serious trouble when Rice, at full-forward, caught a high ball over his head and laid off to Mooney, who you felt just had to tuck home.

Mooney struck it well, low to his left only for Cullen to make a fantastic point blank save three minutes before the break. Donegal weren’t as tidy as moments beforehand but were settled by a point from Conor Reid. Conlon scored a marked point for Monaghan right at the end of the half, which meant Donegal headed for the dressing rooms 1-4 to 0-5 in front but with plenty to think about.

Mooney didn’t have to think too much at the start of the second half, scoring three points from play inside of the opening 72 seconds and Monaghan were in front 0-8 to 1-4.

Donegal recovered well, digging on their reserves to level through a fantastic long-range point from captain McGlynn and then edge ahead with Reid’s second of the evening. Mooney, with his sixth, drew Monaghan level before the second water-break, 0-9 to 1-6.

Then, came that magical final quarter. The camaraderie of the Donegal team, without the normal preparations of a full Buncrana Cup nor league, has to be credited.