Barrett on Donegal U-17 win: ‘I am just so happy that I can hardly even put it into words’ 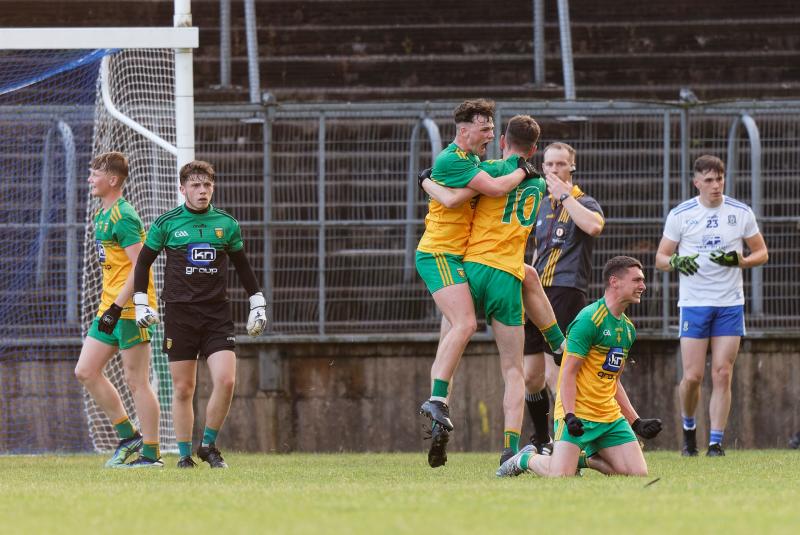 If true triumph is elation recollected in relative tranquility then happy Donegal team boss Luke Barrett was in Seventh Heaven.

For, he and we, had just seen 14- man Donegal gave a display for the ages, a memorable collage of courage, character and class that recalled the seniors and that great second half against Derry in the Ulster final of 1992.

They were a man down for almost 40 minutes in total, and overcame an early second half blitz from Monaghan captain Stephen Mooney, a younger version of the great Nudie Hughes.

And fittingly, it was Donegal captain, the cool classy Luke McGlynn who led the comeback with a superb point from 45 metres to level matters ten minutes into the second half.

From there to the tape, Donegal upped their game and hung on for a victory that will be talked about for a long time in the Hills.

“I am just so happy that I can hardly even put it into words, and it is very emotional, and I am so very proud of them,” manager Barrett said afterwards.

“These lads are great, and they are like young spring lambs and very keen for action. When you go down to 14 for such a long period of time and still win, that takes enormous character and courage.

“At half-time they were ready for the challenge and that made our job so much easier”.

On the second yellow card which saw Ethan Friel leave the pitch-leaving Donegal with 14 men before half-time, Barrett said he did not see it.

“But look five minutes earlier we got a penalty and no black card in fact no card of any colour,” Barrett added. “They were not able to see that but they could see very clearly in Ethan’s case, but I thought the referee Pat Clarke from Cavan reffed it really well and let the contact go.

“Some of the contact in that match was like a SFC Ulster clash and I certainly would not want to be in the middle of it anyway.”

And he paid a huge tribute to his feisty keeper Aaron Cullen - a pocket-rocket and a real leader for that fantastic save just before half-time.”

He also made it from the hugely impressive Monaghan captain Mooney who blasted the ball from what seemed only about three metres out.

But Cullen, whose clan come from Corlea near Belleek, hurled himself at the ball and pulled off a fantastic save. It left hardened hacks gob-smacked, but was no surprise to happy manager Barrett.

“I have been saying that to the people here it is a great save, but we see it every night. He is a phenomenal keeper and a real leader in this group as well.

“You can defend as well as you want but it is great to have a man like that at the very back who can dig you out like that.

“It was a magnificent save but I thought his leadership when we went down to 14 man was simply superb. And he showed great maturity”.

But an equally crucial factor for Barrett and Co was the impact from the bench from Michael Callaghan and Gary Kelly who hit the crucial final three points.

“The competition for places in this team is unbelievable,” Barrett added. “There are players in the first 24, but there are others who are not in that 24 who would make county minor squads anywhere in the country.

“That is brilliant for us as they are pushing this squad hard.

“If you want to play, you put up your hand at training. You are picked on form, that’s the way we do it and the players see that it is fair, and they have bought into it big time.

“Every night in training it is about the team, the collective and we have great subs who always make a big difference. It is fluid and these boys have created their own team ethos. But we are only in a semi-final that is all, and we need to focus on Armagh.

“We need to improve for Armagh. And we were very well tested tonight and knew that Monaghan would have purple patches.

“We told them about that and we weathered the storm and then won a few balls in the middle of the field and generally took control from then on.

“We did not let them get too far ahead of us and if you look at that Monaghan team there were seven or eight of them in last year’s minor final and they ran Derry, who won the All-Ireland, pretty close.

“We knew they would never die and they never give up”.

Donegal now take on Armagh who shocked Derry - on August 7.

“I am not too surprised by that at all,” Barrett added. “They have been going about their business very quietly and they have a great coach in Brendan Hughes. They are well prepared and well coached, and we don’t know much about them as we were focused on this match”.