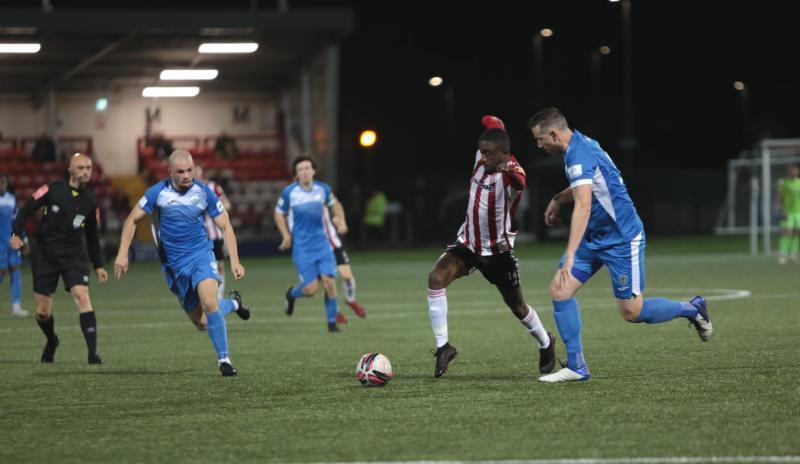 Joe Thomson smashed a last minute equaliser for Derry City past Finn Harps’ Mark Anthony McGinley in a rip-roaring north-west derby where goalscorer and goalkeeper were sent off before the restart.

Jordan Mustoe’s second goal in as many weeks and Ryan Rainey’s second in all for Harps almost made for victory for Ollie Horgan’s side after Junior Ogedi Uzokwe had put the hosts in front. However, following Thomson’s late leveller, he and McGinley were involved in a bit of a melee and referee Neil Doyle sent both off.

Following a delay of three minutes, Harps, who had made four changes, were forced to put Johnny Dunleavy in goal as they saw out the contest that ran into the 98th minute.

Two weeks ago at Finn Park a late Tunde Owolabi penalty in the FAI gave Harps a 1-0 win over their neighbours - their first ever in the competition - with the general consensus that night being the fact Derry only really started playing in the final 15 when they went a goal down.

Both had won their previous four league outings but it was Derry who were at it from the off and over the course of the 90 minutes will feel as if they deserved something. McGinley in the Harps goal was on top form, making a succession of saves with his economical outfield companions getting the visitors from one down to 2-1 up.

Derry began to exert themselves and made the first real opening when James Akintunde found Danny Lafferty, who arrived like a train on 11 minutes in that potentially profitable channel between Harps’ centre-halves and Ethan Boyle. Lafferty opted for power, shooting across goal and McGinley in goal made the first in a series of fine saves.

Nineteen minutes in, Uzokwe powered a wonderful lead goal for Derry from a header from 12 yards out. Joe Thomson provided the assist from a deep cross although Horgan was unhappy with Derry for not stopping play with Owolabi grounded after an Eoin Toal challenge. Horgan and Ruaidhri Higgins became involved in a heated debate on the sidelines, but the goal stood.

After going one up, Derry were on the front foot and Shane McEleney made an awkward but essential clearance from a Lafferty centre. Harps were struggling to get an imprint on developments and McGinley had to be on his toes to snap up a ball with Akintunde on the prowl.

McGinley was called into action again on 37 minutes when he was forced to get down to hold an Even McLaughlin shot.

Two minutes later, although against the run of play, nobody could begrudge Harps the equalizer such was the quality of Mustoe’s strike, with the former Wigan Athletic player sweeping an outswinger of a shot from the angle of the penalty right into Nathan Gartside’s top corner.

Even after the goal from Mustoe, Ramelton native Ronan Boyce almost looped Derry in front at the break, only to see his header cleared off the line by Will Seymore from a Ciaron Harkin cross. It was 1-1 at the break,

Both meetings in the league this term ended in 2-1 victories for the visitors, with Adam Foley scoring a later winner at the Brandywell in May before a double from Will Patching sealing victory for Derry in Ballybofey in June.

Foley, tonight, wouldn’t appear for the second half following a hefty enough clearance by Lafferty, with Karl O’Sullivan coming on.

McLaughlin improvised an unconventional shot from the edge of the area on 53 minutes, opting to go with the outside of his left from 20 yards with Thomson squaring, missing the target by inches.

With a rare Harps chance, Owolabi got in behind Cameron McJannet and opted to go himself, only to hit the side-netting.

However, Harps have proven their qualities of late and on 61 minutes Rainey came from deep to steer Harps into a 2-1 lead with Seymore providing the set-up with excellent play on the right.

McGinley made two great saves midway through the second half, firstly from Jamie McGonigle and then Thomson. Harps were caught when McGonigle stride through again in the 77th minute and again McGinley stood tall before making another excellent save three minutes later.

It looked as though McGinley had done enough but he was eventually beaten by a thumping strike from Thomson as Harps struggled to clear with the irregular bounce on the artificial pitch. In the end, minus a goalkeeper, Horgan might be happy enough with a point.