BUNDORAN FINISH WITH 13; ARDARA WITH 14 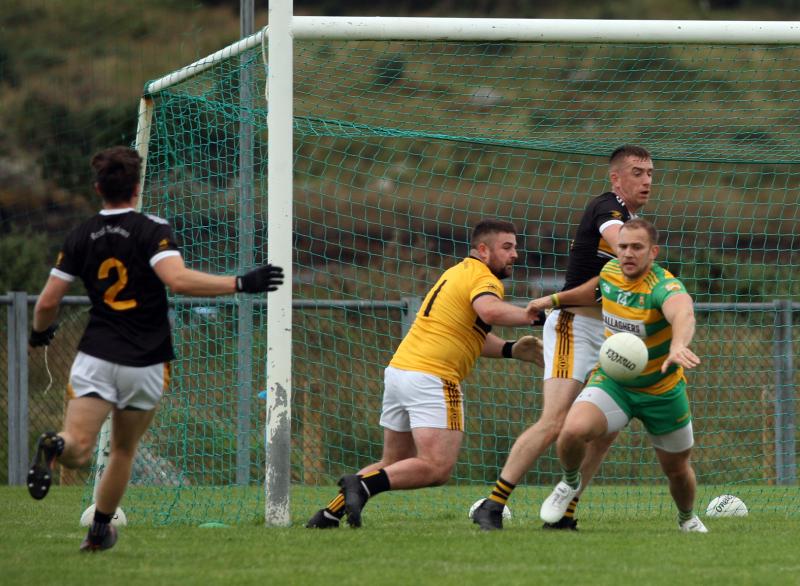 In a topsy turvy game Ardara had to pull out all the stops to get a one point win over Bundoran in Pearse Memorial Park.

After losing out to the Bundoran men twice in the last three seasons, Ardara were up for this game and led by 0-5 to no score at half-time.
In a feisty affair Bundoran finished with 13 men while Ardara also had a man red carded.

Ardara started with Paddy McGrath on the bench while Bundoran were short the injured Jamie Brennan and Alan Russell and the suspended Shane McGowan
Bundoran staged a massive comeback in the second period with two goals to go ahead with nine minutes remaining but Ardara found a way, led by the impressive Conor Classon, to get over the line.
Ardara got off to a flying start with a point inside 25 seconds straight from the throw-in with Daryll Maguire finishing in style.
Paul Walsh added a second after just two minutes and it was obvious that the home side were really up for this contest.
With the wind at their backs, they kept pushing forward and CJ Molloy fired over a free on five minutes to consolidate their position.
However, then for long periods play was confined to half chances and there was 16 minutes on the clock when Ardara added to their lead, Ryan Malley being fouled and Paul Walsh found the range from 30m.
Robbie Adair added the fifth on 22 minutes - a point that was hotly disputed. But with no Hawk Eye in Pearse Park, it was allowed to stand.
Bundoran were reduced to 14 men as the half drew to a close. Paul Brennan, probably out of frustration, lashed out as he tried to link up with a colleague and referee James Connors flashed red to the county man.
Gary Clancy had Bundoran on the board early in the second half but Ryan Malley cancelled that score.
Then came the first big turning point when Ciaran McCaughey got on the end of a Michael McEniff centre and he punched to the net.
By the second half water break Bundoran were back on terms thanks to points from Gary Clancy and Timmy Govorov. By that stage James Connors had handed out two more red cards, to Joe Melly of Ardara and James Stewart (second yellow) of Bundoran.
It looked as if the Seasiders were heading for victory when Matthew Duffy strode forward to put them ahead for the first time and then Adam McGlone got on the end of another move to slide to the net and a four point lead.
But Ardara - and Conor Classon - had other ideas. Points from CJ Molloy (2) and Tomas Boyle got them back within one and then Classon dispossessed Ciaran McCaughey in midfield and set up the move which was finished to the net by Stefan Boyle.
Bundoran tried to the end but could only manage one point from Gary Clancy which left Ardara one point winners.