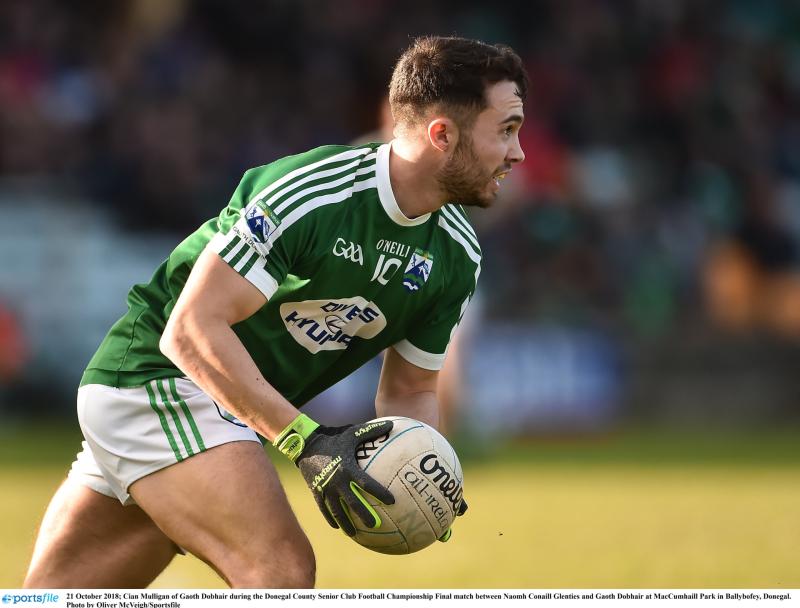 Cian Mulligan was a goalscorer for Gaoth Dobhair this afternoon

Gaoth Dobhair got their championship campaign up and running with a comfortable win over Milford in Magheragallon.

They did it in some style even though they were without the injured McGee, brothers Neil and Eamon and down to 14 men for all of the second half.

Odhran Ferry McFadden picked up a red card for a second yellow card offence towards the end of the first period. In fact they were playing with 13 men for a spell with Gary McFadden picking up a black before half-time.

Gaoth Dobhair were well on their way to victory at half-time. They led 2-12 to 2-3 at the break. Odhran McFadden-Ferry and Donal McBride scored the goals for the locals who were 2-8 to 0-2 in front at the water break.

Shane Black and Rory McMahon scored the points for Milford who were also denied from the penalty spot by Christopher Sweeney.

It was the Gaoth Dobhair goalkeeper who fouled Christopher Barrett and made amends by pulling off a double save from Tony McNamee, who took the spot kick.

Kane Barrett and Cathal McGeetigan scored the Milford goals. McGettigan from the penalty spot after he himself had been dragged back in the large rectangle.

Gaoth Dobhair ramped it up again on the resumption. The points flowed and they were 3-18 to 2-6 in front at the second water break. Eamonn Collum, Cian Mulligan who ended the game with a goal and four points and Gavin McBride added the points and Mulligan struck home goal number three.

And they rounded off the tie with a fourth goal from championship debutant Fionnan Coyle. Milford’s Shane Black picked up a black card in the middle of the second half.