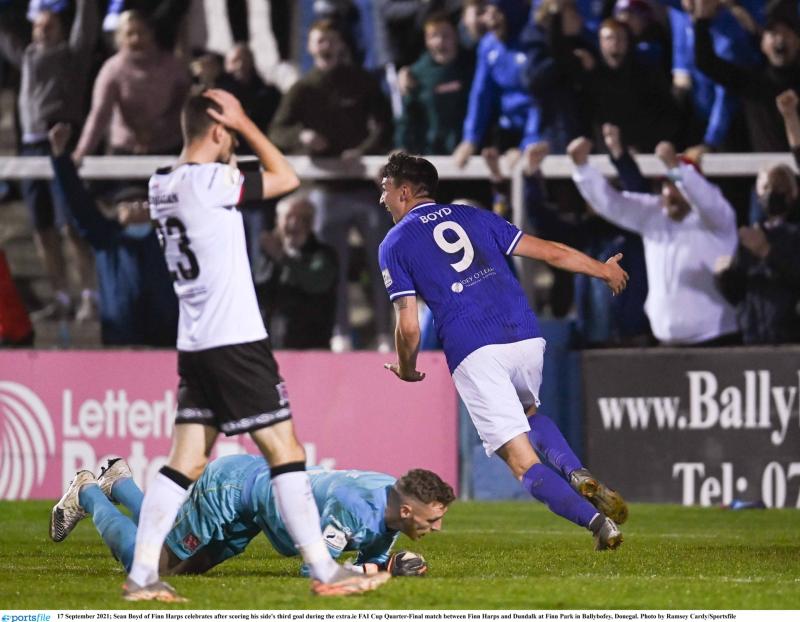 Finn Harps produced the most unlikely of comebacks to seal a 3-3 draw against Dundalk in the FAI Cup quarter-final last night at a booming Finn Park.

Sean Boyd came off the bench to hit two late goals - the second of which came in the 95th minute - to earn his side a replay at Oriel Park on Tuesday night.

Clearest yellow card challenge you'll ever see on Finn Harps striker Tunde Owolabi after two mins. Not given. Let's see if as usual he instead gets booked later himself for something innocuous...

A man in form! An unstoppable drive from Tunde Owolabi.@FinnHarpsFC punish the Lilywhites, catching them in possession, but @DundalkFC have just drawn level through Patrick Hoban. 1-1 at Finn Park.

Notable on the Dundalk penalty that Murray, who hit the shot, isn't looking for a penalty after at all. It looks like it *might* be handball but not like Mustoe's hand was in unnatural position really. So penalty AND red really unlucky.

The Finn Harps bench have just watched video footage of the penalty. They are absolutely furious.

That's a very big penalty shout for Finn Harps as Boyle goes down when in behind. Why would he go down in that situation if not fouled would be my thinking?

Ref had stopped play for a head injury while Harps were in possession and gave the ball to Dundalk.

Hoban peels away to meet Sean Murray's cross and he makes no mistake with the header!!!

Foley and Boyd on the way for Harps... Ollie Horgan hasn't given this up just yet

That's an incredible finish in Finn Park. Amazing moment for Sean Boyd to really announce his comeback but Dundalk's inability to manage a two goal lead against 10 men.....crikey

Looking on the positive side for Bill, we did well not to lose against 10 man Finn Harps despite being 2 goals up.

Can always count on Finn harps to cause chaos

I've watched alot of Finn Harps games but that was pretty amazing.

Maybe it’s me but some of the Dundalk players at times looked totally disinterested after half time even when they were 3-1 up.A Finn Harps come back always looked on the cards .Harps wanted it .Dundalk did not seem to. The soccer Empire has collapsed

I got LOI TV to watch Rovers but Finn Harps have been so good this season. Fair play to Ollie and the lads and could not be happier for Sean Boyd.