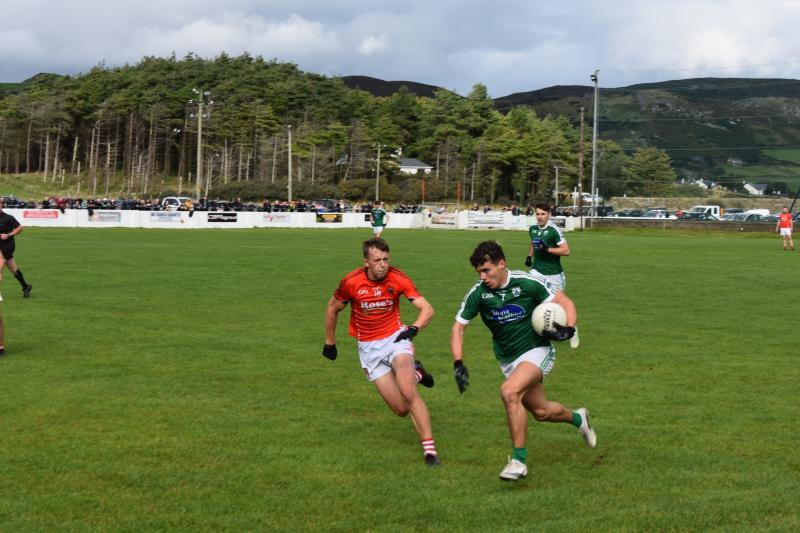 Gaoth Dobhair posted their second win in the Donegal SFC and like their first they did it in style - this time against St Michael’s.

In the end it was comfortable with Niall Friel netting and an own goal from Christy Toye, although for the bulk of the first half it was competitive, with St Michael’s playing with the wind and Martin McElhinney’s goal having them right in the thick of things.

Gaoth Dobhair had hammered Milford first time out and with Neil McGee back in the side following his back injury against Tyone in July, looked dangerous from the off, with Oisin Cannon in the St Michael’s goal saving from Naoise Ó Baoill inside of three minutes and then Odhrán MacNiallais shot wide.

At the first water-break it was 0-5 to 0-4 for St Michael’s, with their total coming courtesy of a Michael Langan brace, Carlos O’Reilly and two from McElhinney. Gaoth Dobhair, who were purring, registered through MacNiallais, Noel Kelly, Eamonn Collum and Cian Mulligan.

The Magheragallon team struck the first three scores of the second quarter, with Mulligan and half-backs Odhran McFadden-Ferry and Niall Friel, although a McElhinney goal late in the half gave hope to the hosts.

Christopher Sweeney made a great save to deny Jamie Hunter only for Hugh O’Donnell to feed McElhinney to net. Daire Ó Baoill levelled it with the last kick of the half.

Colm McFadden's free put the home side ahead in the 32nd minute but that was as good as it got for St Michael’s as Gaoth Dobhair, with the breeze, clicked. Odhran MacNaillais kicked two frees and one from play , sub Neasan MacGiolla Bhride and Collum pointed and it was suddenly 0-13 to 1-6.

Friel then grabbed a goal to end a flowing move to rubber-stamp Gaoth Dobhair’s authority. And although McElhinney posted what was St Michael’s second score of the second half, the 2018 Ulster champions posted points late on - from James Ó Baoill, Gavin McBride and Neasan McGiolla Bhride before a goal in the final minute when the ball hit Christy Toye past Cannon in goal.